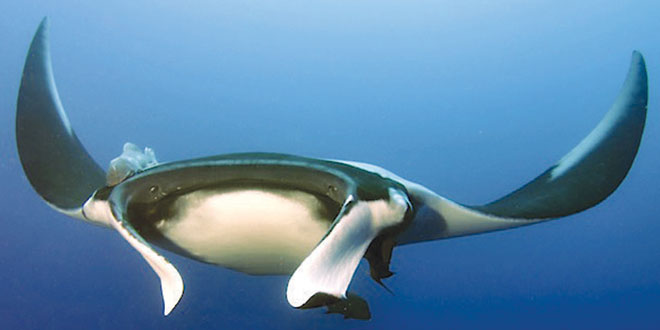 It was a warm September evening and the sun had just set on Keauhou Bay. Captain Kirk Herring carefully guided our boat, Hula Kai, into position and two of our guides, Brent and Megan, sprang into action. A floating, plastic plank equipped with underwater lights was quickly in place behind the vessel.

Wetsuits on and already breathing through our snorkels, my wife Cathy and I waited for the command. The lights along the plank were illuminated below the water and we were told to proceed. We smiled at each other, entered the water and made our way into position. Laying flat on the ocean surface and our masks under the water, we knew our next assignment…wait.

Scanning the reef structures and coral below, at a depth of about 25 feet, it was a night experience that we never knew before. Outside of the lit perimeter the waters were completely dark and eerie. Under the lights several small fish maneuvered, and a few even seemed to make friends with us. It wasn’t long before a shadowy figure approached from the darkness.

At first, you don’t know what is coming toward you. Is it a shark?

Perhaps a dolphin, or maybe something completely unknown? But as it grew near, a squeeze from my wife’s hand expressed her excitement and confirmed my wishes. A manta ray with a wingspan of about 8 feet was directly below us, and a ballet began.

We saw the back of the ray initially, which was very dark, nearly black. Then, to our surprise, it performed a slow and deliberate backflip, circling a full 360 degrees, and doing so with such grace and ease. Then it happened again, and still one more time before returning to the bottom. The sensors on the ray let it know exactly where we were, but it came within inches of our faces! Amazing!

As quickly as it appeared, it was gone. So we did what we were told…wait again. It wasn’t long before a ray was in our view, but a different one this time. Like young children at the circus for the first time, we watched in awe as the ballet was repeated. It continued until, toward the end of our experience, five manta rays were in view, all at the same time, all performing this wonderful dance. It is truly hard to describe this experience.

Naturally, this all happens at this time of day and location for a reason. About 30 years ago a hotel along the coastline turned its exterior lights on for safety purposes and to illuminate the water for guests to enjoy. Noticing marine activity in the water, divers eventually explored the evening phenomenon and discovered the manta ray activity. Now several boaters and their guests can enjoy the same show.

Here is what takes place. As the sun sets, phytoplankton (tiny plants in the ocean) and zooplankton (tiny animals) rise toward the surface. This is the primary food source for manta rays. The lighting from both the shoreline and the boats create a buffet for these rays to see and enjoy, and they are built to do so.

The mouth of the manta ray is very large, and they have 18 rows of teeth located only on the lower jaw. Since their food source is so small, the teeth are virtually useless. These creatures have been around for millions of years, and it is possible that their food source in a past time was different, and the teeth were necessary then.

The mouth is located at the front of the manta ray, which makes it easier to identify. Most other rays feature a mouth much lower on the body.

As plankton enters the mouth, all of the water passes through the gills (5 on each side), but the food is trapped and directed to the stomach. Food items that are too large will be filtered back out to prevent them from taking in objects too large to digest. An adult may consume anywhere from 40 to 60 pounds of food per day!

On each side of the mouth is a cephalic lobe, which can be used for several tasks, including to scoop plankton into the mouth.

The exterior of the manta ray might feel like sandpaper, but it is covered with a thin mucus to protect their skin. Touching this creature could create a rupture of that coating, making them more susceptible to parasites and/or disease.

Congratulations are in order to the owners of the Hula Kai, Puhi and Mendi Dant for their professional approach to marine tourism. My wife and I found the crew informative, accurate and extremely ethical in their education to guests about the ocean’s creatures and how to interact with them. A job well done.

As for you, Mother Nature, thank you for this amazing opportunity.

I feel so fortunate to have watched such a magnificent dance, to have been just inches away from another one of this Earth’s most magnificent animals. It was truly another stepping stone on a journey to understand how the world works.

Bob is the owner of Stepping Stone Ecotours and a naturalist for this area’s only dolphin survey team. He is a member of Florida SEE (Society for Ethical Ecotourism). Bob loves his wife very much!