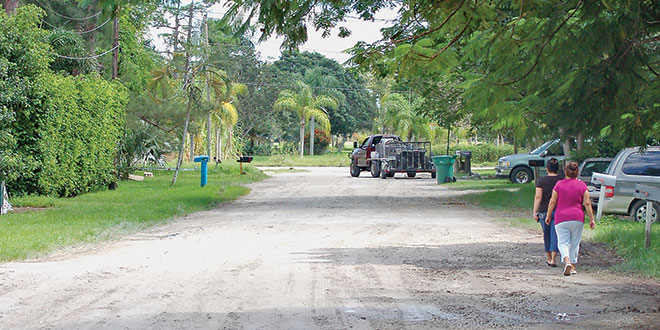 Each morning, Y Bread Run volunteers collect unsold bread and bakery goods donated by Publix and Starbuck’s to distribute to those in need. Until recently, a road in East Naples that was the last leg of the Bread Run was nothing short of a moonscape. The dirt strip featured more potholes than smooth sections, and negotiating it by car or even truck was painstakingly slow. Walking the road was just as tricky, made worse by summer rains.

But two weeks ago, through the efforts of Y board member Allyson Richards, donors and Marco Rock’s Andrew Purcell, the road was vastly improved.

Richards did the fundraising over the past year. Jayme Lowe, also a Y board member, suggested approaching Marco Rock, and Purcell willingly donated his time to do the grading and resurfacing.

Richards said, “I called (County) Commissioner Donna Fiala, and she told me it was actually a private road. She said if the county were going to fix it, the residents would have to be assessed. They could never afford that.” The same with the fire department. If they deemed the road impassable, the residents would also have to be assessed to cover the costs, Richards said.

Richards vowed to improve the situation for the local residents. “I find it difficult to ask for money directly, but I can tell my story,” said Richards, who did just that in a conversation with her husband’s attorney. “He came along on the Bread Run,” Richards said, “and the next thing he mailed a check. I was almost in tears.” That precipitated a concerted drive to raise the rest of the money.

Besides benefitting local residents, the fixing of the road will also benefit the Bread Run. “Some of our volunteers said they couldn’t continue if the road wasn’t fixed,” Richards said.

Despite the grading and stoning being an in-house affair, Richards and her volunteers made sure they received signed permission from the dozen or so residents living along the road. Not surprisingly, there were no objections.

Richards is contemplating leading the charge to get Blue Heron Drive paved with asphalt. For those who know her, that may not be too far down the road.