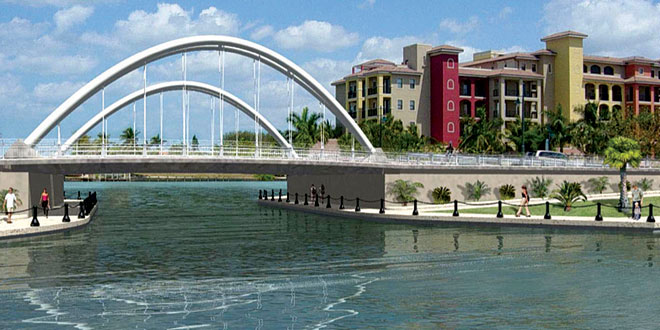 After nearly four years of design, planning and debate, the Marco Island City Council has instructed city staff to complete the bid package for the $11.5 million Smokehouse Bay Bridge project and put it out for bid. The measure was approved during a special meeting last week by a vote of 5-2 with Councilmen Larry Honig and Larry Magel voting against it.

An idea to patch up the bridges for $650,000 was pushed aside in favor of moving forward with the project, and was characterized by Public Works Director Tim Pinter as a “five-year band-aid.”

“This bridge is an accident waiting to happen,” said Councilman Chuck Kiester. “Think of the lawsuits we can avoid if we do this now.”

Smokehouse Bay Bridge has been a fixture of the island’s North Collier Boulevard since 1963. At that time, the bridge had a 45-year life expectancy. It is now 50 years old, and its age is showing.

In a presentation to the city council, Pinter explained the necessity of replacing the two spans, beginning with the city’s own 2007 overlay project 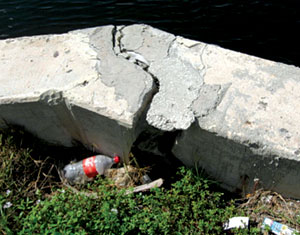 Seawalls along the bridge are badly damaged.

to repair portions of the bridge deck and the 2009 design charrette in which five bridge design and engineering firms competed for the city’s design contract. TY Lin International won the charrette, and the final $1.9 million design is nearing completion.

Pinter also provided photographs and a Final Condition Assessment and Recommendation Report as evidence to replace the bridges.  According to the report completed by Cardno TBE last October, the two bridges are “functionally obsolete due to the lack of adequate shoulders separating the travel lanes from the sidewalks.” In fact, less than six inches separates the edge of the curb from passing traffic.

Further, the concrete bridge decks, bulkhead supports and seawalls were found to be in drastic stages of disrepair and deterioration. The bridge decks are between 51 and 57 percent deteriorated, with some “sections of deterioration penetrating from the top to the bottom of the deck slabs.”

The report further noted that the bulkheads and seawalls are so degraded and cracked that seawater is intruding and fill soil is being lost, causing several holes to develop adjacent to the backside of the bulkhead. This 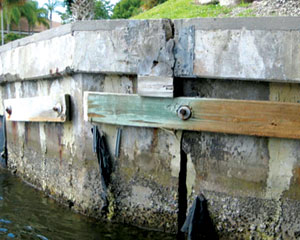 City Council agreed the bridge is a safety hazard.

could result in major stability issues for the bridges, especially if Marco Island sees any major storms in the near future.

Then there is the aesthetic angle. “If a private citizen has this type of seawall, we would have fined them already, probably several years ago, and the fines would probably be in the millions by now,” noted Pinter.

Still, there are two obstacles to overcome. First is the short timeline for the bid process. Permits already have been pulled on the project, and those permits expire in July. If there is no progress, the city will have to go through the permitting process again, and the price tag for that is $50,000. That gives the city three months to put the project out to bid and award it. If the process succeeds, construction of the 18-month project can begin by late August or early September.

Second is funding. Between the design charrette ($100,000), design plans and permits ($1.9 million) and the third-party condition assessment ($30,000), the city already has spent more than $2 million on the project.

In his presentation, Pinter proposed financing the remaining $9.5 million

of the project through a 20-year loan. At a three percent interest rate, payments will total $640,000 annually, and $3.2 million in interest will be paid over the life of the loan.

The council, with the help of citizens in the audience, discussed additional funding sources, including $2 million in the city’s asset replacement fund, $11 million of uncommitted surplus funds and a $1 million annual transportation grant from Collier County, which the city will continue to receive through 2017.

Regardless of the funding source, the council’s vote certainly had community support. Former Councilman Bill Trotter characterized the project as “a critical health and safety issue for the island.”

“Why don’t we start something and finish it?” asked resident Richard McGuiness. “The most important project we need now is the Smokehouse Bay Bridge. It doesn’t make sense to put it off again. Are we waiting for the walls to fall down so we can’t use the canal, or are we waiting for someone to fall off of the sidewalk and get hit by a car? I don’t want to come back here and tell you I told you so.  Speed up this process!”