Smiles and Tears as Chaudhry Departs 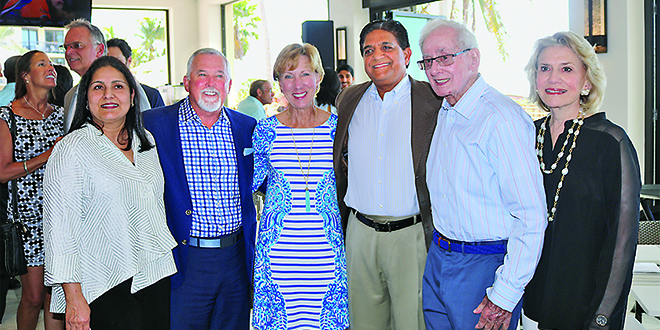 For Mac Chaudhry the day had to be bittersweet last Sunday. The longtime manager of the Hilton Marco Island Beach Resort and Spa would gaze out amongst 150-200 family, friends and co-workers who would assemble in the newly renovated dining facility to wish him well as he moves on to the next chapter in his life.

The entire facility has undergone a $40 million dollar renovation and update, which Chaudhry had overseen in the last six months.

Chaudhry literally started his 28 year career at the bottom rung of hotel management and worked himself up to be one of the most respected and liked professionals within the Collier County hospitality industry.

“When I first heard that Mac would be stepping aside I was devastated,” said Alex Parker, the president of the Marco Island Chamber of Commerce. “He has really been a great asset to the island as a whole and his presence will be missed both as a professional and a friend,” said Parker.

“When Hurricane Katrina devastated the Gulf Coast, it was Chaudhry and his staff who stepped up to organize a one-day fundraiser within the community that centered on the Hilton property. They raised over $35,000 in that one day to aid victims of that disaster,” said Cindy Love, the executive director of the Greater Marco YMCA.

Jack Wert, the executive director for the Naples/Everglades/Marco Island Convention and Visitors Bureau was also on hand to compliment Chaudhry on his contributions to the Collier County business community, as was County Commissioner Donna Fiala and former State Senator Garret Richter and his wife.

When Andrea Olshan, CEO of Olshan Properties addressed the hushed crowd she would speak of her family’s admiration and love for Chaudhry and his accomplishments regarding the crown jewel of the Olshan Hotel holdings. Her father, the man behind the Olshan name, would quietly sit and nod his head in agreement as his daughter praised the work ethic and professionalism of Chaudhry.

Mort Olshan, who founded Olshan Properties in 1959 and built it into a major real estate investment and management company, also praised the work done by Chaudhry and spoke of the close relationship that their two families shared.

Chaudhry addressed the gathering and thanked them for being his “extended family.” He expressed appreciation of the many friendships and relationships he had acquired during his 28-year history on the island. “I couldn’t have done this without all of you, and for that I’ll always be grateful, said Chaudhry.

He also praised the Olshan family and their friendship, and thanked them for the opportunities they provided to him during his tenure.

The signature smile that would be a trademark of Chaudhry during his career was on display the entire afternoon, as he bounced from guest to guest to thank them for coming, while recalling a story or two as they chatted.

Chaudhry and his wife Qudsia will be relocating to Orlando, joining their children, Areeb and Areesa who attend college there, and begin to write the next chapter in their lives together. However, Chaudhry did drop a hint or two that the island may not have seen the last of them and he wouldn’t rule anything out in the future, once their children have graduated.