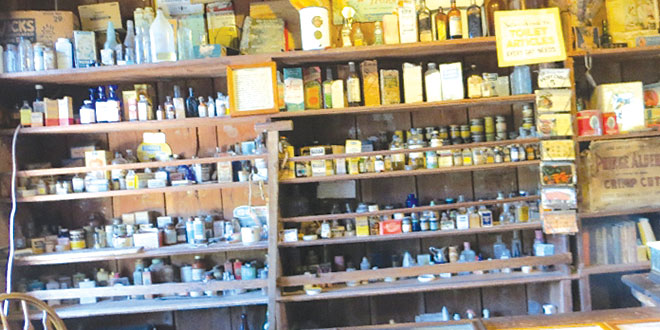 Stepping into the Smallwood Store is a tripback in time.

Museum curators could never replicate the artifacts contained in the Smallwood Store standing precariously on the western edge of the Everglades. The original 1906 trading post and post office, established by Ted Smallwood, has changed little over the last century. Bottles of liniment, wooden dolls dressed in traditional Seminole garb, dry goods and other necessities of life, line the store’s wooden shelves.

Preserving this gem of Florida history is coming to a head, though, possibly in January, in a Florida courtroom. A four-year legal battle over a spit of road leading to the store, now a museum listed on the National Register of Historic Places (since 1974), has a lot of people riled up and ready to rally.

On Saturday, Jan. 31, a host of Florida’s down-home musicians, are gathering for a benefit to defray legal fees mounting in the case to save access to the Smallwood Store. On the bill are: Wholetones, Raeford Starke, Nate the Gladesman, Stone Crab Steve Arvey, Florida Boy (Pete Gallagher and Pat Barmore), Valerie Wisecracker and the Walking Catfish, Andy Hackney, J. Robert Houghtaling, Snooker Joe Stem and Sun Guy. The event will be held on the grounds of the historic Rod and Gun Club on the Baron River in Everglades City, just 30 miles south of Marco Island off Hwy. 41/Tamiami Trail.

Lynn Smallwood McMillin, who is the granddaughter of Ted Smallwood, said, “I am overwhelmed by the generosity of these Florida folk who want to help and are willing to come down here to support us.” 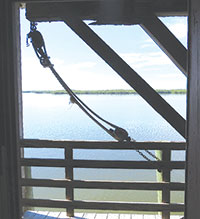 The museum was placed on the National Registerof Historic Places in 1974. PHOTO BY PAT NEWMAN

seating for the event is $40, or $10 for general admission (bring a chair or blanket). All proceeds go directly to the Smallwood Benefit Fund, which is a 501(c)(3) non-profit. Book online with credit or debit cards at www.evergladeshistorical.org or call 239-695-2905.

Chokoloskee Island was first inhabited 2,000 years ago by natives who built mounds and canals which were later used by the Calusa tribe until the mid 1700s when they ceased to exist. Other Native Americans moved in, enlarging the mounds and living off the rich, fertile land and water. The Seminoles migrated to the Everglades to escape the Florida Wars and remain today.

Eventually, white settlers moved in in the late 19th century and continued hunting and farming. The influx created a need for goods and mail, resulting in the Smallwood Trading Post. Furs, feathers and produce were exchanged for necessities. The Smallwoods maintained a good relationship with the Seminoles which continues today.

In the 1900s, the store’s management fell to Lynn Smallwood McMillin’s aunt, Thelma Smallwood, who was savvy enough to get it listed on the National Register and took many pictures of the place and its customers. Thelma passed away in 1979, and the store eventually closed its doors in 1982 with almost all its remaining inventory remaining.

Ten years later, after a master cleaning job, Lynn reopened the store as a museum. Surprisingly, she and husband Gary, who navigated the local water as a stone crabber for 33 years, discovered that Smallwood Store is the second “most visited” small museum in the 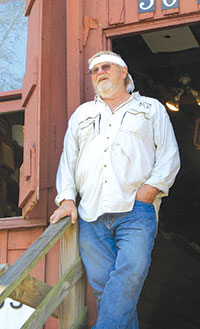 The only access to the trading post until 1956 was by water. It was then that a small road, Mamie Street, was built. It wasn’t until 2010 that the dispute arose.

Adjacent to the Smallwood store is a 4.75-acre waterfront tract owned by Florida Georgia Grove LLP (FGG), a development group from Central Florida. The existing road leading to the museum cuts right through the middle of the FGG property. At one point, the company planned to develop the parcel, and in 2010, it received permits from the US Army Corps of Engineers, the Florida Department of Environmental Protection and Collier County to replace 450 linear feet of seawall, install a boat ramp, dredge about 1,456 cubic yards of material from the basin and replace the wooden boat dock.

According to Smallwood McMillin, she attempted to settle the issue by applying to the Army Corps of Engineers for a permit to build another route. The permit was required because of the existing mangroves, and it was denied. That is when the real trouble began.

In April 2011, FGG fenced the perimeter of the property and destroyed parts of Mamie Street in order to begin dredging the basin. Complaints flew in; a law suit was filed to declare Mamie Street “public”; and FGG’s progress came to a screeching halt, leaving Mamie Street almost undriveable. The Ted Smallwood Store was forced to close its doors for six months until FGG was forced by court order to reopen Mamie 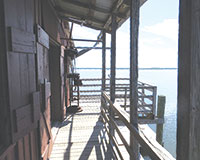 The legal battle dragged on until January 2014 when the Board of Collier County Commissioners voted not to vacate its claim to the public right of way on Mamie Street. Prior to this, the BCC considered signing an agreement with FGG that would require Collier County to “vacate” Mamie Street, thereby giving the road to FGG. The settlement agreement also required FGG to provide access to the Ted Smallwood Store, but it would have made Mamie Street a private road giving FGG the option to relocate it. The judge in the case ruled FGG repair the road, re-opening access to the Smallwood Museum.

Today, the fenced-in area still stands. A new round of hearings between FGG attorneys and Smallwood McMillin’s legal team is expected in January, although no date has been announced.

In the meantime, Lynn and Gary open the historic landmark daily. Gary estimated that in “season,” notably January and February, about 150 visitors daily tour the museum. Conversely, a typical day in July draws maybe 10 tourists. A $5 donation is accepted at the door.

Gary also takes folks on custom tours by boat around the Everglades, navigating to beach areas, birding spots and key locations for avid photographers. Costs vary according to the length of time spent on the water and start around $45 per person.

Hours are 10 AM-5 PM December through April and 11 AM-5 PM May through November. Local authors like Rick Magers are often on-hand to talk with visitors, along with the Smallwood McMillins who share their insights and history of Florida’s “Last Frontier.”