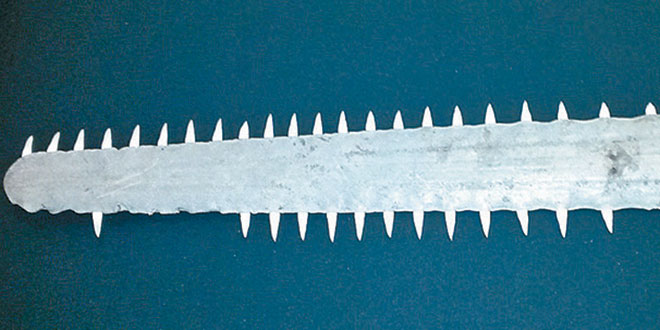 Rookery Bay Reserve (RBR) regularly presents educational programs and lectures by local and visiting experts in various biological disciplines. On March 11 two lecturers shared the podium, Kelcee Smith from LSU who is studying the Smalltooth sawfish and Patrick O’Donnell of RBR who is studying sharks.

The topic was sawfish, so Smith led off with a report of her research and O’Donnell followed with his observations of sawfish locally.

Smalltooth sawfish grow to approximately 21 feet, are very strong and quite dangerous. Thus, the process of catching, taking the various measurements and tissue samples, tagging and releasing them is safer and wiser with juveniles.

The smalltooth sawfish is an endangered species. It is known that their population is small, but there are no good estimates of their population. The results from tissue testing indicate that their genetic diversity is good. So, Smith hopes that eventually she will be able to get an estimate of the population by extrapolating from the results of tissue sampling.

She also takes tissue samples from the rostrums, the saw part of the fish, from sawfish that were caught when fishing them was legal and are now saved in museums and private collections. This will give her a genetic history as a base for understanding the genetics of living sawfish.

Old smalltooth sawfish rostrums in private possession can be useful for the DNA. Kelcee Smith noted she would like to get as 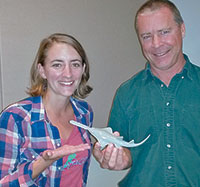 many samples as she can and would appreciate contact from anyone who has one.

Patrick O’Donnell studies sharks, catches, measures, tags, takes samples and releases them in Pumpkin Bay, Fakaunion Bay and Fakahatchee Bay. As a by-catch he sometimes gets a sawfish in his net.

He noted that the smalltooth sawfish is a fast growing species, born at about three feet long and growing to about eight feet at two years of age. He has caught healthy sawfish in both salt water and nearly salt-free fresh water, concluding that, unlike many fish, the sawfish can thrive in either.

During the question and answer time, one person asked how the female avoid being damaged in birth by the rostrum of a three-foot baby. The answer: there is a gelatinous covering about the consistency of petroleum jelly on the rostrum at birth. It quickly dissolves after birth.

If you see a sawfish, please report it to both to the Florida Museum of Natural History (FMNH) and to FWC.

To file a report of a sawfish sighting or encounter, please include the date and time of the encounter, the location, the estimated length of each sawfish, the water depth, and any other relevant details.