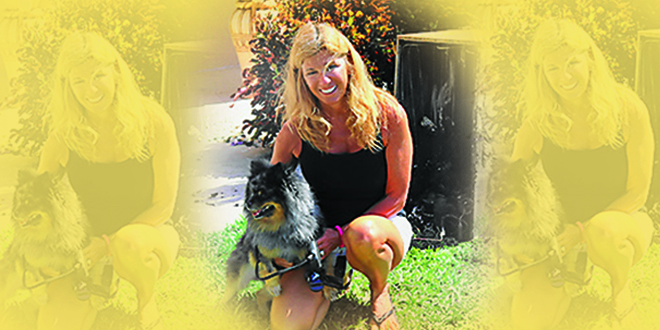 The stories are countless throughout the nation of lives lost from residential fires as residents slept while smoke and heat filled kitchens and other rooms as it raced towards the unsuspecting victims who slept soundly until it was too late.

We hear about these tragedies all the time and this year alone there have been 483 deaths in structure fires since January 1st.

For CeCe Krokenberger of Rochester, N.Y. she owes her life to her small dog Shultz, a Blue Merle Pomeranian who woke here about 1:10am.  “He just started to bark and woke me from a sound sleep.  I could smell something like burning plastic and went into the kitchen where there was light smoke and I could hear crackling sounds,” said Krokenberger.

I called 911 and the dispatcher advised me to vacate the residence and they would be dispatching fire units.  By the time I had exited the house and turned around the black smoke was rolling out the front door.  By the time I got to the street you could see flames; I couldn’t believe how fast it happened,” continued Krokenberger.

“Our crews made a quick knock down of the event and began overhaul without incident.  Had the dog not awoken the resident we might be having a different story to relate to you this morning,” said Battalion Chief Jeff Kutzke of Marco Island Fire/Rescue.

Mrs. Krokenberger and her husband had been renting the home for the last month and she was preparing to meet her husband later in the week, as he had to attend to business elsewhere and had left the day before.  “Unfortunately this has been a nightmare since the beginning of the rental, we were very disappointed with the condition of the house.”

“I called the person who was looking after the home that evening and her response was simply that it wasn’t her home.  I advised her of the fire and the scene outside the home with all the trucks, etc., but she didn’t seem too concerned,” said Krokenberger.

There were no operational smoke detectors in the home and the subsequent fire melted the doorbell chime which was ringing after Krokenberger had evacuated
the residence.

“We can’t stress enough the need to have operational smoke detectors within your homes, and if you are renting to make sure your agent or yourself insures those devices are operational.  The same goes for swimming pool barriers and alarms to prevent drownings of children.  You have to be your own advocate for safety,” said Chief Kutzke as he patted Shultz the lifesaver.

According to NFPA there were 501,500 structure fires in 2015, causing 2,685 civilian deaths, 13,000 civilian injuries and 10.3 billion dollars in property damage.  35% of those deaths were in structures with no working smoke detectors.