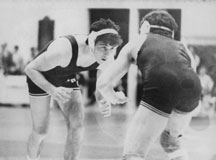 A STORY OF DISCRIMINATION, INTERVENTION AND DETERMINATION

High school can be an enjoyable, enlightening, and rewarding four years that prepares us for the uncertainties which lie ahead, while providing a lifetime of memorable experiences. It is a time of laughter and amusement, and of affiliation and attachment. It is a time for experimentation through trial and error, and a time for learning how to coexist with acquaintances and friends as we seek to find our identity. It is a chapter in our lives when we begin to acquire the maturity and wisdom to make proper choices, learn to respect one another’s differences and develop the fortitude to thwart off inappropriate pressures from our mentors and peers. And, even though some may reflect on their high school years as unimpressive and forgettable, the majority of us will view our stay as a positive experience.

However, for some, the experience will forever be remembered as a living hell because the instructors, classmates, friends and acquaintances who should provide the support and encouragement which we so desperately seek and need, to develop and thrive, are often discourteous and intolerant with those who vastly differ in appearance, demeanor and social standing. And the ramifications of such discriminatory behavior are long lasting for these actions can drastically reduce the intended target’s self esteem, restrict potential, and inflict invisible scars that can last a lifetime.

The story I am about to tell is the best example I know which illustrates how intervention and positive reinforcement forever altered the life of a determined freshman who faced discrimination, yet thrived. A young man whose grit and determination forever altered how those he encountered would perceive and react to another’s appearance and physical limitation.

When David Wilson entered the wrestling room of St. Bernard High School in December of 1972, little attention was averted from the coach’s opening remarks to the slim four-foot eight-inch freshman who quietly took a seat at the end of a long line of hopeful candidates. At the time, no one could have imagined the greatness this young man was destined to achieve as an athlete, mentor, and innovative entrepreneur. But later that day, when Dave stepped onto the scale to register his weight, he gained the full attention of his peers. “Sixty-seven pounds the coach called out.” The entire room went silent. Even though the sport was introduced only two years prior to Dave’s arrival on campus, the program at this small Catholic school located in Uncasville, Connecticut was sound, and the team, highly respected. And, even though wrestling is a sport that provides opportunity across a broad spectrum of weights and sizes, the lowest weight-class was 98 pounds, and therefore offered little opportunity for Dave to compete.

There were other major obstacles confronting David. For one, the two weight classes that were within reach were occupied by a set of brothers who were 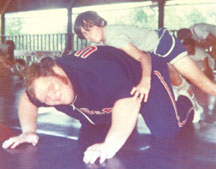 the best in their respective weight classes. But the biggest hurdle to overcome was the fear of injury and the school’s exposure to liability. There were several members of the faculty and staff who expressed reservations about Dave’s participation in contact sport, and pressured the coach to reconsider his never-cut policy. After all, he was far too small to gain from, or contribute to, the sport of wrestling. But, the coach, having faced similar size discrimination throughout his early high school years, did not waiver and refused to succumb to the pressure of his peers.

The first three weeks were more difficult than Dave had imagined. Practices were grueling and painfully confining. There was no heat nor windows in the oversized storage area that was barely large enough to house the wrestling mat. Since the coach did not believe in cutting any student who could handle his demanding three-hour practices, the room was crowded with candidates numbering more than thirty.

To accommodate all the hopefuls, the heavier wrestlers alternated with the lighter weights, each providing a barrier for the other, to prevent a collision with the cement block walls. At first Dave would avoid a wrestler hurled in his direction. A few weeks later, he held his ground. By mid-season he would push the much larger teammates away. Weeks passed before Dave was conditioned to compete. But, when Dave’s big break did come, the outcome was far from expected.

When Dave stepped onto the opposing team’s mat for the first bout of his career, all eyes turned to the smallest athlete in the gym who beamed with pride as he stepped onto the mat to make his inaugural debut. Just as he was about to take his third step toward his opponent and referee, Dave tripped and fell flat on his face. Dave had done the unimaginable. He had placed his footwear on the opposite feet. The crowd went wild. Even his home bench erupted in laughter. But, this would be the last time that anyone would laugh at this young man’s actions.

That day, David soundly won his first match, and in the years that followed, he would win the respect of teammates and opponents alike, and would set standards that would be envied and admired for nearly forty years.

While at St. Bernard’s, David was named a two-time scholastic All-American and had only one point scored against him in dual meet competitions. He won two Christmas tournament championships, two state titles, three Freestyle state titles, and two New England Freestyle titles. He was the recipient of the ‘fastest fall award’ for the most pins in the least amount of time in three tournament competitions, and in the 1976 state class championships, won all matches by pin or major decision. And, at the age of seventeen, David placed 3rd in the Olympic Trials, losing his final match by only one point. 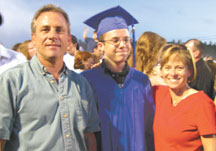 college career was equally impressive. As an engineering major at Worchester Polytechnic Institute, he was named the outstanding freshman athlete, and later, the outstanding senior athlete. He compiled an impressive 57-3 dual meet career record, was a four-year All New England Wrestler and placed third in the Division III NCAA Championships. Dave became the first wrestler in WPI’S 155 year history to be named an NCAA All-American wrestler.

Dave Wilson’s success did not end with wrestling. He began his professional career as a senior engineer for General Telephone and Electric, left the company three years later to found Oasis Group, a software consulting firm. He later joined GTX Corporation as marketing manager where he gained worldwide recognition as a leader in wide format imaging. A decade later, he founded Open Archive Systems, a document imaging company which he later sold to Service Point, headquartered in Barcelona, Spain The company hired him to manage its global research and development operation. In 2010 he left the company to found DocuFi, a cloud and imaging company where he currently serves as president and CEO.

At age fifty, Dave has many more frontiers to conquer. But one must wonder what degree of success would have been obtained if he lacked the confidence gained through his participation in sport.

Discrimination has, and will remain, one of the most prevalent, repugnant forms of anti-social behavior. Like adults, students are singled out and unfairly treated for a variety of reasons, most stemming from our own insecurities. And, like adults, students are ostracized for their age, dress, appearance, gender, race, athleticism, intellect, ethnicity, social standing, economic status, weight, and size.

“Man” has a tendency to fear the unknown, and in doing so, strikes out against those who differ in appearance and manner. Individuals and groups often attack those who seem different and vulnerable in order to enhance their self esteem at the expense of another, or to advance their standing within an inner circle of friends and acquaintances. Students are prone to such behavior because they are often not aware of the severe ramifications of such cruel, damaging mistreatment which can spiral into bullying and other forms of physical abuse.

It is the inherent responsibility of every person to guard against such hurtful behavior, and to intervene when necessary. As a society we must be far more attentive to the example we set for our younger generations to follow. And, as a society it is our responsibility, through our teaching and guidance, to demonstrate that compassion toward our fellow man is not a sign of weakness, but rather of strength, and that every person is entitled to be treated with dignity and respect.

We want to encourage the future David Wilsons of the world to participate fully in life and provide them with the opportunity to thrive and reach their maximum potential. Would we not be a far better society with such a universal effort?