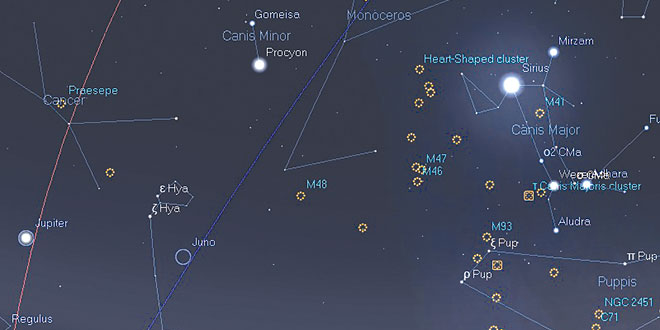 Looking Southeast, 9 PM, Jan. 9. How many moons of Jupiter can you spot with your binoculars? SUBMITTED PHOTO

Long ago, it was thought (wrongly) that in the summertime when the Sun and Sirius were in the sky simultaneously the extra heat Sirius provided caused the season to be hot. Thus, the old phrase the “dog days of summer” was born.

Sirius is a good example of a star that is bright because it is close to us, only 8.6 light years away. If three other stars in the hind end of Canis Major — Aludra, Adhara or Wezen, all modestly bright stars on their own — were the same distance away from us as Sirius, they would be bright enough to cast shadows. Indeed, Aludra would challenge the Moon as ruler of the night for most of the month.

Also in Canis Major is the cluster M41, probably the faintest object visible to the naked eye that was described in ancient times. You can see it also if you are in the dark skies near Copeland on State Road 29; otherwise, it is an easy binocular object that shines like a tiny tag hanging from the dog’s neck.

Nearby Canis Major is the rather nondescript constellation of Monoceros, the unicorn. Although the constellation has no bright stars in it, the Milky Way does run through it, and so there are a fair number of binocular targets available. The brightest are M47 and M46, the former being rather brighter. They are rather difficult to locate as there are no bright stars nearby to use as a guide, but if you find one it’s easy to find the other as they are so close to one another, possibly even in the same field of view. Scan the whole area slowly with your binoculars and your patience will be rewarded with the discovery of several other clusters.

At last, we have another bright planet back in the sky in the early evening. Venus we mentioned last time, but tonight, Jupiter has cleared the horizon before 9 PM. It’s a little low for binocular viewing, but in a couple of hours, you will be able to spot its satellites with your trusty 10x50s.

On the night of Jan. 17, our club telescopes will be at Collier Seminole State Park (weather permitting) for a public viewing after 6 PM. Take the Goodland exit from Marco, and the park will be on your right. Also on Jan. 23, there will be telescopes at Big Cypress National Preserve at 6:30 PM. Take US 41 east, past SR 29 and look for a turn between mile markers 73 and 74 (Seagrape Drive).

Mr. Usher is President of the Everglades Astronomical Society which meets the second Tuesday each month at 7 PM in the Norris Center at Cambier Park in Naples.