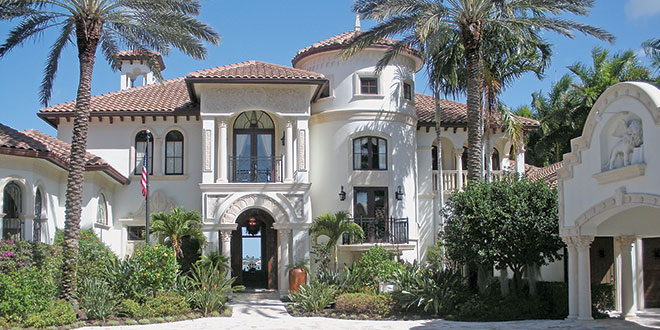 Appropriately named Villa Venezia, the award-winning, waterfront home, with its eight-and-one-half bedrooms, eight-and-one-half baths, 1,100-square-foot guesthouse, expansive lanai, formal dining room with keystone columns and much more, is on the market for $9.45 million, complete with furnishings, artworks and antiques.

The rear of the residence in the evening glow. Photo by Advanced Photography

The two-story home last sold in 2007 when it fetched $9 million, the highest sales price ever on Marco.

The property owner, R. Gary Stetson Nominee Trust, has accepted an offer, but the deal is pending, based on satisfactory completion of “contingencies,” such as inspections, said Jim Prange, a realtor for Premier Sotheby’s International Realty, who is handling the listing, along with his daughter, Nikki Prange-Carroll. He said the purchase agreement won’t be cleared up until the end of September.

“Until the contingencies are released, we are continuing to show the property and we would accept a back-up offer,” Prange added.

The spacious, well-appointed lanai at night. Photo by Advanced Photography

both extensive and indicative of the meticulous and exhaustive attention to detail of its creator, Everett Van Hoesen, a retired IBM executive who designs and builds custom homes.

A detached garden house that can be converted into a home theater, exercise room, two additional garage spaces or more.

Quick, deep-water access to the Gulf of Mexico from Roberts Bay.

• A 40-foot-high, hand-carved, 8-ton, floating, coquina shell staircase with extensive iron and woodwork featured on the cover of DuPont Registry.

• A massive living room with commissioned art work, large picture windows for lots of natural light and hand-painted frescos on the 26-foot-high ceiling.

• An elevated concrete gazebo extending into the bay.

• A disappearing-edge pool, with a Jacuzzi, inspired by the look of shallow Italian fountains and 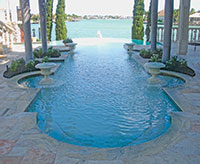 Villa Venezia’s pool appears to empty right into the waters beyond. Photos by Don Manley

the ambiance of Venice, with bridges and steps over the water.

“There’s nothing like this on the island,” said Jim Prange, “It’s amazing, the quality and the thought that went into this. The house has got a timeless design.”

Van Hoesen was a regular presence at the jobsite during Villa Venezia’s two-years of construction. But he never took up residence there, once it was completed in 2004. Instead, he placed it on the market, with a price tag of $15.9 million.

The bar area offers a view of the magnificent staircase.

Van Hoesen was nothing if not painstaking in his planning.

“He went to Italy, studied architecture and came back with the idea that he was a 16th Century Italian sea captain looking for his residence,” said Prange. “That is when a lot of the old Italian forts were built and the Villa Venezia’s turrets resemble the specifications for the gun turrets from those forts.”

Many of the home’s other architectural features mimic well-known Italian landmarks, such as the Winged Lions from St. 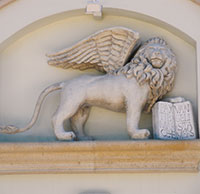 This figure of a lion commonly graced the exterior of 16th Century Venetian homes. An upward tail meant it was wartime, while the downward facing tail meantpeace ruled.

Mark’s Square, the scales of justice that grace Villa Venezia’s front, with a replica of a 16th well nearby and the mural of the Sistine Chapel that adds flair to the ceiling of one room.

Another of the home’s unique features is its lot size. Prange said most homes in the Estates have lots that are 125-feet wide and 175-feet deep, while Villa Venezia’s lot is 366-feet deep, making it more than one acre in total.

“It’s probably one of the deepest lots on the island so that allowed them to really stretch out the house,” said Prange.

Villa Venezia has been on the market for about 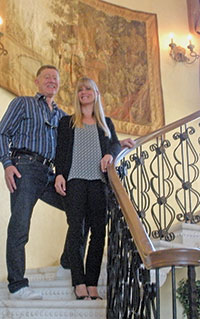 seven months it has been marketed locally and internationally on more than 500 websites, including the Luxury Homes Institute, the Wall Street Journal and the New York Times, which Prange said is one of the world’s top international real estate sites.

Prange said the home has been getting a lot of attention from prospective buyers because it’s priced to sell. “Someone’s going to get a good value here,” he added. “The value is incredible.”

An adjacent home sold for $6.5 million in December, 2014, which equals $920 per square foot, he explained, before adding that if that calculation was applied to Villa Venezia, the asking price would be $12.9 million.