Singer’s Gone, but The Song Lives On 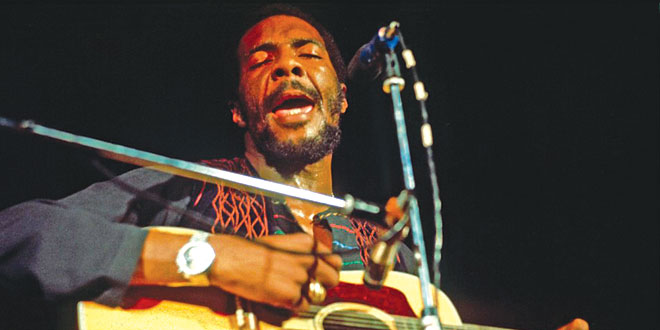 Men-tor (noun) – “A trusted counselor or guide.  A tutor or coach.*

“I start strumming my guitar and the word freedom comes out of my mouth as FREE-dom, FREE-dom, with a rhythm of its own. My foot takes over and drives my guitar into a faster, more powerful rhythm. I don’t know where this is going, but it feels right and somehow I find myself blending it into an old song, ‘Sometimes I Feel Like a Motherless Child,’ a great spiritual song my grandmother used to sing to me as a hymn when I was growing up in Brooklyn.” – Freedom – Ritchie Havens

Havens has become legendary for his timeless opening set at Woodstock and his improvised hit song “Freedom,” as well as a thorough album catalogue, including original songs and creative renditions of folk tunes.

In a 1971 Rolling Stone interview, John Lennon compared Ritchie’s unorthodox guitar playing style to his own. He said, “I think there’s a guy called Richie Valens, no, Richie Havens, does he play very strange guitar style? He’s a black guy that was on a concert and sang “Strawberry Fields” or something. He plays like one chord all the time. He plays a pretty funky guitar. But he doesn’t seem to be able to play in the real terms at all. I’m like that.”

Ritchie was a free thinking, self-taught artist and musician from Bed-Stuy, Brooklyn.  He was discovered by Bob Dylan’s manager, Albert Grossman, in the Greenwich Village hippy/folk scene of the mid 60‘s.

I was fortunate enough to be introduced to Ritchie Havens in 2001, nearly as family, by my good friend’s father, Roland Villanueva. A man who Ritchie described as his “oldest friend and jammin’ buddy from the good ‘ol days in the Village.”

When we first met Ritchie, he was down here in Florida, doing the “Wildflower Folk Tour,” with Janis Ian, Judy Collins and Roger McGuinn. We went to the show, two hours early, as per Ritchie’s instructions. When we got to the front, and presented the clerk with the special VIP passes, security escorted us to the backstage area, down a bunch of halls, and toward the dressing rooms. Almost a cartoon like figure at first glance; a very tall lanky bearded man, draped in traditional African dashiki waited for us at the

hall’s end. Extended arms, one with a well-aged dagger tattoo, and an excited smile told us we were, in fact, not just anybody to him that day. We were old friends. Well, at least Roland was, but we were with him at the right place and at the right time!

The two hours flew by with the old dogs reminiscing about the 60’s, and catching up on each other’s lives. One of the stories I will never forget him telling was about Woodstock. Ritchie told how he had gotten the call to do this show – of course, nobody knew it was going to be so big – but he called Roland up, like usual, and asked him to come “upstate” with him for a little outdoor gig in a cow pasture.

As the tale went on, I realized that he wasn’t gonna let Roland live down his “little regret” of saying “no.” Telling Ritchie that he was opting to hang out with a girl, over what would’a been… well, HUGE! The moral was obvious. As Ritchie put it so eloquently, “Boys, don’t ever let drugs, money or women get in the way of your musical dreams. They will if you let ‘em!”

At the time, I was in a band with Roland’s two sons, Jesse and Misha. When we played our music for Ritchie, he was very open to the sound, and though vastly different from his take on Folk music, showed interest and assured us that he would help out in any way he could. Little did he know, he had already put us on a positive trajectory. Even before I met Ritchie, his “larger than life” presence, had led me to study, and regularly practice his alternate “D” tuned guitar technique as well as his extensive body of music.  From the stomping foot percussion and the almost “trance” like melodies, to the rich-toned voice that was as powerful as it was unaffected, over time, his life and music has influenced my life and music in countless ways.

“I think we as a generation were really seeking something like that to happen,” Havens said of Woodstock. “I call us the last, speak-when-you’re-spoken-to generation, and because of that, we went out and started to do our own thing. Freedom is what we’re all talking about getting. It’s what we’ve been looking for. I think this is it.”