Simchat Torah-Rejoicing with the Torah 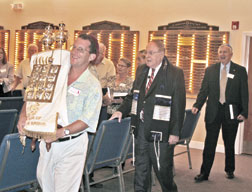 On Friday, October 21, the Jewish Congregation of Marco Island celebrated Simchat Torah-Rejoicing with the Torah, concluding the High Holy Days, which began with Rosh Hashanah, continued with Yom Kippur, Sukkot and Simchat Torah.

Prior to the ceremony, Rabbi Edward Maline, spoke with this writer and Kathleen Tuttle, the Church Lady of The Eagle. Rabbi described the elements of the service we were about to witness. The service included reading the last passages of the Book of Deuteronomy about the death of Moses, immediately followed by reading from the opening chapter of the Book of Genesis, the story of creation.

“We conclude the cycle of reading the Torah and begin to read it all over again for the new year,” explained Rabbi.

A most memorable feature of the evening is the procession of all the Torahs around the sanctuary. One of the Torahs is unrolled with the entire congregation holding the precious scroll as Rabbi Maline and leaders of the congregation encircle all present.

Rabbi explained that “making a circle by enveloping the congregation in the Torah is a significant happening because in Jewish folklore, making a circle is the way in which we shut out the evil of the world. By encircling the congregation with the Torah, which is a force for good, hopefully, we shut out the evil of the world and we allow the Torah to be a force for good in our personal lives, in our communal lives, in the life of the nation and the world.”

Another reason for enveloping the congregation in the Torah is to remind them that the Torah belongs to the people of God. It is the story of God’s chosen people and His relationship with them from the beginning of the written word of Holy Scripture.

The evening’s service included a memorial for members of the congregation who died in the past year. All the Memorial lights are turned on and the names of the dead read out. The congregation may add names of other loved ones at the time of the memorial readings. The deceased of JCMI are remembered especially, four times a year, on Yom Kippur, Sukkot, Shevuot and Passover.

Rabbi explained that the ceremony would conclude with a procession to the Sukkah, a fragile, temporary booth erected on the grounds of the synagogue. The Sukkah remains up for eight days and reminds us of God’s providence. Through His bounty we are able to sustain ourselves. One can look through the Sukkah and see all the good God has given us.

The fragile construction of the Sukkah is also a reminder of the fragile nature of the world and our responsibility to care for all that we have. Our American Thanksgiving is modeled 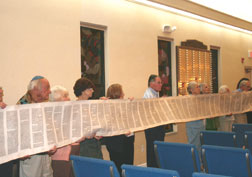 Everyone has the chance to hold the Torah.

after Sukkah. The Pilgrims, who first settled America, knew the Bible well and found inspiration for the Feast of Thanksgiving in Leviticus, which recounts the gratitude of the Jewish people for a fruitful harvest.

Rabbi Maline commented that the Simchat Torah is a very old ceremony dating back to biblical days. It is mentioned in Leviticus as the 8th Day of Solemn Assembly. Rabbi read the relevant passage during the evening’s service.

Natalie Klein, accompanied by Dr. Ron Doiron, led the music for the ceremony beginning with the Kindling of the Lights of the Sabbath and the Festival. Marvin Klein read the introduction to the Kiddush remembering the Exodus from Egypt followed by the blessing of the wine. A lively refrain singing the praises of God, Adonai, and thanking Him for His goodness preceded readings from the Mishkan T’Filah. A selection of readings follows:

“Source of life, every year you plant a new tree of life…may you teach us a Torah of love that will nourish us in every season,” intoned Rabbi. The readings continue with an admonishment to teach the Commandments to our children, to remember them at home, when we leave home and write them on our door.

“Doubting is but the forefront of faith, a faith in the infinite growth of an unbounding creation. A doubt is an idea that is still alive…To doubt is to understand that we cannot yet imagine what shall be.”

Prayers were offered for the sick of the community and the assembly sang a lovely refrain asking for God’s blessing.

The Torahs were removed from the Ark and carried around the sanctuary several times. Members of the congregation touched the Torahs with their prayer books as they were carried by. The Torah was unrolled and encircled the assembly of worshippers. This writer, and my friend, were invited to participate. We were honored to stand together holding the sacred Torah as we prayed for divine favor and joy in our personal lives and in the life of the congregation. The entire assembly offered a blessing over the Torah and Rabbi Maline read the last passages of Deuteronomy and the first readings of Genesis.

The Torah was rolled up to joyful music celebrating the conclusion of the High Holy Days. Some congregants expressed their joy by dancing and singing Hava Nagila. The service concluded outdoors at the Sukkah and a reception, an oneg, followed.

Steve Goldenberg thanked everyone for coming and introduced new members and guests. He also shared that Simchat Torah is his favorite celebration and one he was honored to share with the congregation.

Rabbi Maline reminded his congregation “the Torah belongs to you, not to Moses, not to me , but to all of you who believe in the Word of God.”