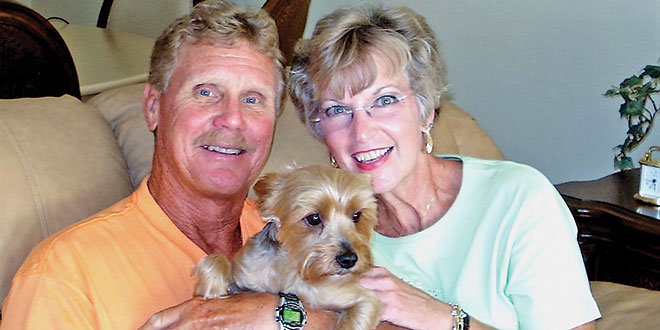 When my grandmother died of breast cancer in 1968, no one really spoke of it. I don’t know which word provoked the silence – the word “breast” or the word “cancer.” My guess is that it was both, because each word by itself brought forth the image of something unmentionable. Put the two words together and you really had something unthinkable and almost shameful in the 1960s. As a matter of fact, Ganny (pronounced GAH-nee, her nickname of endearment that arose from my brother’s inability to pronounce “grandma” as a toddler) passed away without knowing that cancer was the cause of her death. She knew that she had been diagnosed with breast cancer in July 1967 and underwent a mastectomy followed by radiation treatments, but was told that “they got it all” and that her bone pain was due to arthritis. Cancer was considered to be so unspeakable in those days, it was believed that the patient was better off not knowing the truth. Most of the family knew, but not Ganny. There was one other member of the family who also did not know. That was me.

Growing up in a two-family house where my maternal grandparents lived upstairs and we lived below, Ganny had been my constant companion while my mother was at work. She was my soul mate and best friend. I can understand why I was never told the truth about her cancer. I was only 10 years old and had already learned the words “biopsy” and “mastectomy.” The word “metastasis” would have been way too much for me at that time. When Ganny died, I did learn the truth. Her death left me with a crushing pain and void of silence that I carried inside for many years. It left an invisible scar. 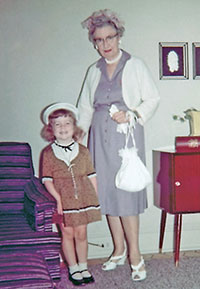 her experiences to bring comfort to others. My mother passed away at the age of 83 in 2013, but she was a cancer survivor throughout her life. The disease never returned to her body again.

But the disease did continue to stalk my family. In 1995, I was diagnosed with breast cancer. I made the decision that in my life, there would never be silence or hushed tones. I speak forcefully, probably sharing more details of my experience than some would choose to know. The way I look at it, spreading awareness can save lives.

I was actually diagnosed with two different types of breast cancer in one breast. Paget’s disease of the breast is a scaly rash in the nipple area that is often mistaken for dermatitis. Infiltrating ductal carcinoma is a tumor that begins in the mammary ducts and spreads to other parts of the breast tissue. I first noticed the rash of Paget’s disease in October 1994. I went to one doctor who had no idea what the rash could possibly be. I went to another doctor in July 1995 when the rash had progressed and was actually bleeding. He suggested that I try using Lubriderm to alleviate the symptoms. In spite of my family history, neither doctor suggested that I have a biopsy. Always staying on schedule with appointments, I had already had a mammogram within that past year that showed everything “within normal limits,” so I really didn’t want to be a hypochondriac. I just assumed the doctors knew what they were doing and everything would be just fine once I used that Lubriderm.

It wasn’t. In August 1995, through a self-examination, I detected a lump in addition to the rash. Fortunately, I chose to see a different doctor who immediately scheduled an appointment for me to have another mammogram, a breast ultrasound and an additional appointment with a surgeon. The mammogram once again showed that everything was within those so-called normal limits. Although it is an excellent screening tool, a mammogram only provides a two-dimensional image and is not always effective in cases of dense tissue. The ultrasound zeroed right in on the tumor, showing its presence and necessitating an immediate biopsy. Within 10 days of finding that lump, I had a mastectomy with axillary lymph node removal. Pathology tests determined that the cancer had spread to my lymph nodes and was possibly moving on to other parts of my body.

The surgery was followed by six months of very aggressive chemotherapy. The side effects of the

chemo included total hair loss, severe anemia and fatigue. I was employed as a registered dental hygienist, single, and a homeowner with a mortgage to pay. Taking time off from work was not an option for me. That’s where the American Cancer Society’s Look Good Feel Better program stepped in. This support program helps cancer patients disguise the cosmetic side effects of their treatments. When you look good, you really do feel better and can face whatever it takes to move on. I made it through the course of my treatments, taking very little time off from work, keeping my life as normal as possible.

My story goes on to be a happy one. The universe holds a source of healing for those who believe. I call that source God. We can all call it love. That terrible void from losing Ganny was finally filled with the spirit of hope. The invisible scar was replaced with real scars, but they are my badge of courage.

I was 38 years old when I was diagnosed with cancer. Next May I will turn 60. For me, that is nothing short of a miracle. In 2001, I married the man of my dreams on the sands of Marco Island. Phil and I celebrate life each day here in paradise with our Yorkie, Buster. The beautiful Marco Island sunsets fill our hearts with the promise of tomorrow. That is a promise I will never take lightly. I feel blessed with the opportunities to serve on the committees of the American Cancer Society Imagination Ball (February 4, 2017) and the Relay For Life (April 1, 2017). Someday there will be a cure for this terrible disease. There will be no more silence.

Please heed my advice by taking the responsibility of your health into your own hands. See your doctor every year for an exam, perform regular self-examinations of your breasts and stay on schedule for your mammograms. It is my opinion that you need to do all three of these things, as no one examination tool is enough on its own. The value of physical breast exams, both self and by a doctor, has been disputed in recent years. Based on my personal experience, I believe they are of utmost importance and necessity. If you think there is something wrong and you are not comfortable with your doctor’s advice, seek other opinions. Please remember that regardless of family history, no one is immune to this disease, not even men. Rise above the silence and listen to your body. Be vigilant.