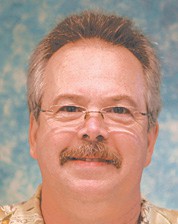 I recently completed a custom made 18kt. yellow gold gent’s signet ring to be presented to a gentleman’s grandson. I honestly can’t remember the last time I have had a request for one of these rings that used to be the rage many years ago. They are not really in demand today.

The creation and wearing of signet rings can be traced back to more than 4,000 years ago and were widely worn by the Egyptians, Greeks and Romans. Originally it appears the word “signet” or seal ring originated from the Latin word “sigillum,” which means seal or sign.

The engraved flat surface would have a carved away or raised symbol, initials or caricatures, even a noble person’s face or profile. In times when very few people could even write, important documents or decrees of importance from senators or even the emperor of Rome himself were stamped with signet rings for authenticity. As the centuries rolled on, soon the signet ring would display family coats of arms or monograms of one’s initials, hence the term “initial rings.”

The family crest rings would be used with wax to seal a letter to signify the creator and importance of the document. I’m sure folks back then would cringe receiving a stamped letter requesting their immediate presence from the likes of a ruler named Nero or Caligula!

Many signet rings from the Roman era exist in museums all over the world today and for their time the detailed craftsmanship of the carvings both in metal and on gemstones are truly amazing.

Most come in two forms of style, such as “Cameo” that are raised letters or figures on a flat surface and “Intaglio” the same carved into a flat surface that many times are carved in reverse to read properly in the stamped wax.

I’d rather not tiptoe through the centuries with how the signet ring progressed for fear of boring you all to death, so let’s fast forward shall we…to the 20th century.

My uncle Richie who was also a master goldsmith made beautify raised detailed three initial signet rings for all his nephews. The rings were 14kt. yellow gold handmade solid, sideways oval rings. My cousins still wear their rings after 50-plus years. For the life of me I have no idea what happened to mine. I do recall being very upset when I discovered it missing. At today’s gold prices if I reproduced the ring it would cost well over a thousand dollars.

In the ‘70s and ‘80s I created signet rings, and especially initial rings that would sometimes spell the whole first name. In the blue blood city of Boston, large gold or silver family crest rings were a good part of my business back then. My 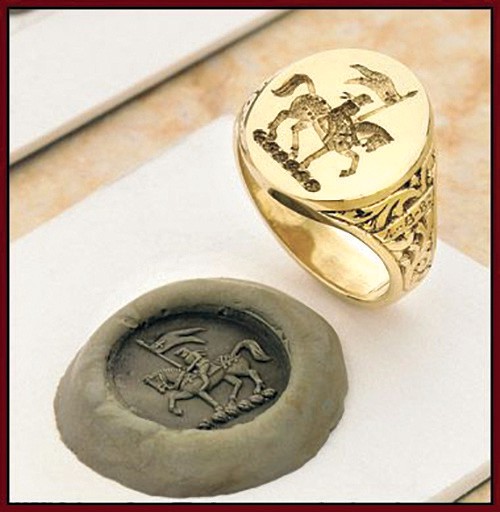 next door neighbor in the Jeweler’s Building was one of the most talented hand engravers around. Mr. Walter Kelly hand carved dozens of crests, initials and even total hand carved wedding bands. Try finding a talented hand engraver today. I know of only a few and their services are more than just pricey, and the time it takes for the project can take many months because they are swamped with work.

Mr. Kelly had an inspiring young apprentice named Richard Degal, who in time also mastered the art of hand engraving. As matter of fact, Richie and I apprenticed in the building together while I learned the trade of a goldsmith. Sadly, Mr. Kelly passed away in the late ‘80s and Richie Degal and I stayed in touch after I left the building to pursue my own business in the suburbs.

I had my own store; I would drop off and pick up work from Richie, who now had his own shop also in the burbs. Richie’s work was also exceptional; he had a good teacher.

One afternoon while in his back room workshop I could not help but notice rows and rows of what appeared to be parts for horns, such as saxophones, trumpets, flutes, etc. To my amazement he had a huge profitable business hand engraving these magnificent instruments, which unknown to me were made from precious metals such as gold, silver and even platinum!

He asked me back then not to mention it to anybody; for just one hand engraved finished horn can fetch hundreds of thousands of dollars and were commissioned pieces from some of the most accomplished concert musicians in the world. Apparently, the type of metal affects a particular pitch and tone of the instrument. You learn something every day.

Nowadays most engraving is done by diamond tipped machines or computer guided systems like the one I have had for several years now. They do a fairly good job, but it’s never as good as skilled hand engraved work.

Just recently I have been exploring the latest technology of laser engraving that can closely reproduce the look of true hand carving. The only problem is that the machines currently cost around twenty thousand dollars or more. Maybe if I behave Santa will bring me one next Christmas. The one and only thing holding me back is seeing a state of the art laser engraver eventually pay off and make me a profit on this itty bitty little island before the next ice age.

Richard Alan is a designer/goldsmith and owner of The Harbor Goldsmith at Island Plaza and welcomes your questions about all that glitters. Contact him at 239- 394-9275 or harborgoldsmith@comcast.net, or visit his informative website at www.harborgoldsmith.com.