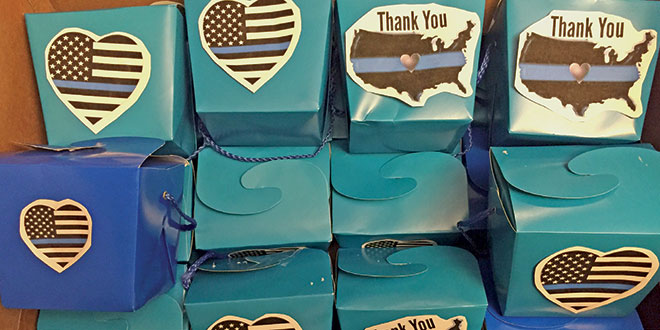 Tiffany Carr is the wife of a Tampa Bay police officer and friend of local resident, Emily Cawlfield. After the recent Baton Rouge shootings, Tiffany came up with the idea to do something for the officers to show her support. She made little goody bags and wrote “Got Your 6” on them, which originates from the military meaning “got your back.” She then challenged her Facebook friends to participate in a Got Your Six Challenge.

Emily felt compelled to accept the challenge. She went to the Dollar Store and bought candy, peanuts, hand sanitizer, Chap Stick, tissues, etc. She spent $20 to fill six boxes. Then her mother pitched in, and then an aunt pitched in, and soon 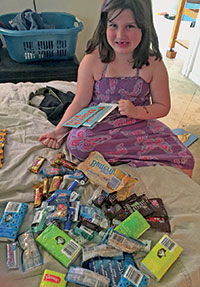 they had 21 boxes filled with goodies for officers. Emily, and her daughters Amelia and Eve, put the boxes together and decorated each with a thin blue line logo.

“It was an amazing experience. We brought the entire box down to the courthouse and the police officers were all at lunch, so there were about 15 of them that came downstairs to the main floor when we dropped them off!” said Emily. A short time later the Cawlfields received a letter of appreciation from Sheriff Rambosk for the support they showed the men and women in the department with the goody boxes.

Coastal Breeze News would like to thank the Cawlfields for their effort. If you take up the challenge be sure to let us know and send us a photo or two!