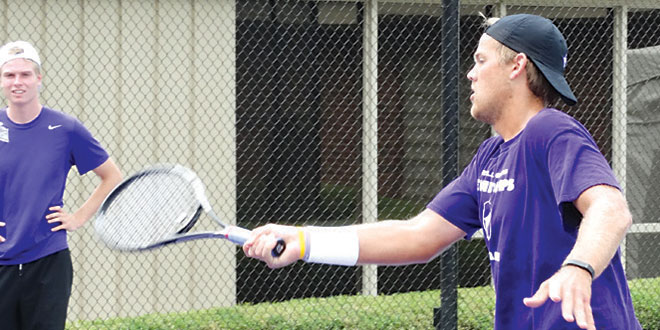 As long as I have been around the great game of tennis, most coaches have started their new players with the forehand drive. A few lessons later, and the new player is working diligently on their backhand stroke, and eventually start moving forward to work on their net game.

However, would it be a game changer if all new tennis players began their quest at the net verses the baseline? Would beginners look at the game in a different manner?

First, let’s probe the advantages of coaching the volley ahead of the groundstrokes. First, the volley is a very simple, short stroke. In my opinion, a large percentage of new players have great success with the volley due to its unassuming nature.

In other words, there is little backswing and a very basic compact finish. There really is very little room to go “off the tracks.” The backhand volley offers more challenges because one must decide between a “one-hander” verses a “two-hander.” The coach will make the proper determination, as she will experiment with each style.

Whether a coach utilizes the Playmate ball machine or implements the hand toss, a large number of new players will excel with their new volley. To better improve eye contact on this quick new stroke, coaches prefer their student to step into the volley and make a modest punch.

In short order, the beginner has achieved excellent success with their volleys and has gained valuable confidence. Now this brand-new player is poised to take on heavier tests, and will look forward to learning the baseline game.

Another keen approach is to have the beginner move from volleys straight to the serve. Why? Once again, the student will be striking the ball in the air and has already gained valuable self-assurance from mastering their volleys.

If the pupil has prior sports experiences, the serve may not be a daunting task. Often, the only difficult aspect of learning the serve lies in the toss. To me, the key is to let the apprentice feel free to fail. Yes, it is okay to fail. Once the student begins to reach up and toss above their head, good things start to develop.

Now, with my new pupil self-reliant, she will be anxious to delve into the groundstrokes. In today’s more modern world, coaches offer an unlimited amount of methods to achieve baseline weapons. For instance, with today’s semi-western forehand grip, beginners are able to achieve rapid success.

Prior to the modern game, golfers and tennis players were only offered the ‘shake hands grip,’ and students often felt uncomfortable trying to swing their club or racket. With today’s more user-friendly, semi-western grip (the palm of the hand secures the grip), beginners flourish.

Additionally, the advent of the two-handed backhand has enabled beginners to conquer their fear of hitting this new stroke.

There is an abundance of reasons why we should encourage new players to the sport of a lifetime:

In summary, formulate a plan before your first lesson. All highly skilled tennis professionals will ask a series of questions to jumpstart your game. If it is your desire to begin at the net, she will oblige. Good luck.