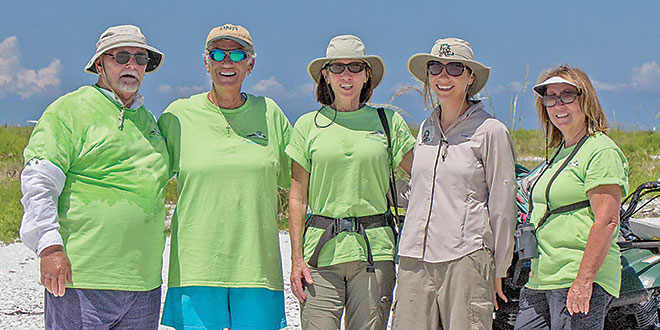 Lucky Birds: Volunteers from the Collier Shorebird Stewardship Program, wearing bright green shirts with bold letters, “Ask Me About The Birds,” were the “boots on the sand” ensuring a successful nesting season at Big Marco Pass (BMP), also known as Sand Dollar Island. They worked around challenges posed by the Hideaway and Central Beach dredging projects, the effects of Tropical Storm Colin, and heavy traffic from party boats and dogs at the tip of the Pass, just to name a few. Their presence made a big difference, especially during long holiday weekends, acting as extra eyes and ears for Florida Fish & Wildlife Conservation Commission (FWC) and Marco Island Police Department (MIPD) enforcement.

Second Chance (SC) Sandbar: This sandbar is located one mile southeast of Cape Romano. In March 2015, FWC designated SC as a Critical Wildlife Area. (CWA). Annually, this sandbar will be closed to public access from March 1st to August 31st. SC is owned by the State of 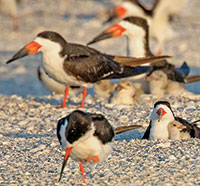 This year, black skimmers have returned to Second Chance. Last year, there were none.

Florida and managed by Rookery Bay National Estuarine Research Reserve in cooperation with the Audubon Society, and Department of Environmental Protection. Each spring the least terns return from their wintering grounds in Central or South America and settle on SC sandbar.

SC’s Successful First Season: According to Adam Dinuovo, biologist from both Rookery Bay and Audubon, SC sandbar did very well for its first season. On Dinuovo’s last visit, he counted 60 least tern chicks that were nearly fledged (capable of flight). By this writing he is sure they are all fledged. These chicks came from roughly 50 nests. Dinuovo also counted 20 black skimmer chicks. He attributes SC’s success to the cooperation from agencies such as Audubon, FWC, law enforcement and from the dedicated volunteers from Rookery Bay National Estuarine Research Reserve.

Big Marco Pass (BMP): Also known to many as Sand Dollar Island, BMP was designated a CWA by the State of Florida in 1988. According to Dinuovo, BMP is 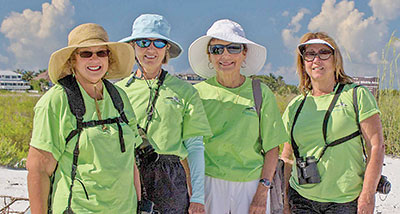 also experiencing a successful season, the least terns are done with the breeding season, and colonies on BMP produced more than 250 chicks. The black skimmers will be done nesting in a few weeks and it is looking like the colony will fledge more than 300 chicks. Dinuovo credits the successful season to Audubon, FWC biologists and the presence of FWC enforcement and also MIPD.

“Snowbirds” Are Coming (The Feathered Kind): As the last colony of summer shorebirds leave BMP, other “snowbird” friends are “winging” their way to Marco Island. These long distance flyers come from as far as the Arctic Circle and stop over to feed and rest on their way to South America, or they may winter over.

Bird Etiquette: When you encounter a bird colony resting by the shoreline, keep your distance and avoid flushing the birds.

If you want to protect the birds, please consider joining the Collier Shorebird Stewardship Program for the winter. If interested, please contact Adam Dinuovo at adinuovo@audubon.org.