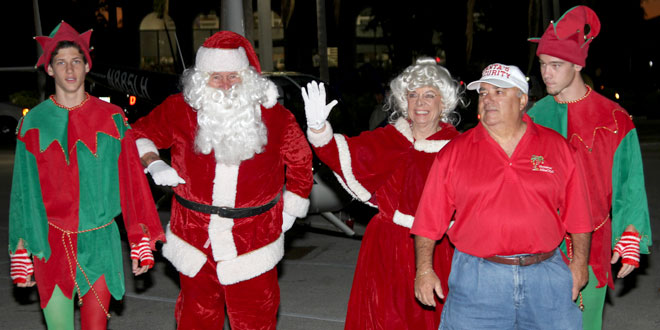 The Shops of Marco were filled with hundreds of holiday revelers as they awaited Santa’s annual visit the day after Thanksgiving. The annual Christmas Island Style celebration is a child’s first opportunity to see Santa and that indeed, Christmas is fast approaching. (Santa often keeps his reindeer home to reserve their energy for the big night.)

The crowd lined up along the parking lot as they heard Santa’s helicopter overhead. A parent held his sons hand, “Santa flew in all the way from the North Pole.” “No,” said the boy, “he’s coming from New York. He was in the Thanksgiving parade just yesterday, remember?” The excitement of the children was clear in their cheers and giggles as Santa approached.

Santa and Mrs. Claus were met by two elves and were escorted to his special chair where children could reveal all of their Christmas wishes while having a portrait taken by photographer, Victoria Wright. The Shops of Marco were transformed with live music by JRobert and his son Martin and DJ Steve Reynolds. A raffle was held with special prizes given by each participating merchant or restaurant. All proceeds went to the local charity the Joy of Giving.