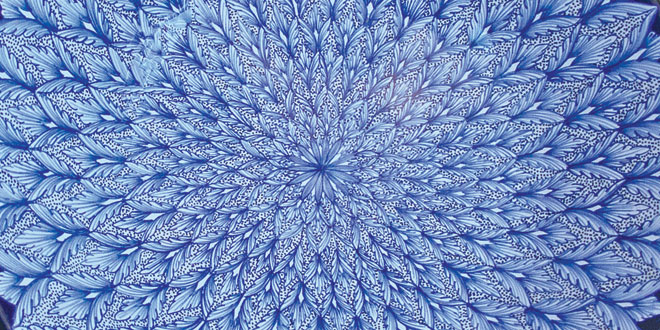 Italy is a wonderful place to shop for ceramics. The combination of earth, water and fire used to make ceramics has been a tradition in this country dating back to its earliest times. The term ceramics comes from the Greek and refers to anything made of clay. Majolica refers to enameled, decorated ceramics, usually bold in color and intricate in design.

The Amalfi Coast is a particularly picturesque shopping venue for Majolica ceramics. Vietri sul Mare is the unofficial ceramic capital of this area. It is where one will find the largest selection and best prices. In Vietri, one can visit factories or peruse the many shops located there, particularly along the pedestrian only Via Madonna degli Angeli, as well as Corso Umberto I, and Via XXV Luglio. Unfortunately, as the “first” town on the coast after Salerno, it is not as large a tourist attraction as some of the better known towns further up the coast.

The tourist magnets of Sorrento, Positano, and Amalfi on the coast and Ravello above it all feature ceramic shops and there are others along the coastal road such as Ceramiche Piccadilly in Conca dei Marini near the Emerald Grotto (between Amalfi and Positano) and Ceramiche Casola just before Positano.

Most of the shops offer “free” shipping with a certain minimum purchase. The lowest threshold I saw was 250 euros, the highest 500.

After purchasing some small souvenirs at a few of the shops in Amalfi, I was ready for bigger and better choices. At a shop in Positano, we inquired about stone tables. I was thinking of a table for the lanai, but my husband suggested the dining room. The price for the size we needed was 4800 euros. My husband gave me that look that wives know oh so well and walked away. I was still thinking about it when the practical Swiss side of me took over so I walked away also. I hadn’t given up on the idea though; I knew we still had two weeks during which I could make a decision.

Our next ceramic stop was in Ravello at Ceramiche d’Arte. There was a large bowl to which we were both drawn. That is unusual as we typically have different tastes. When we purchased our first painting by a local artist here on Marco, we ended up with each of our’s third choice because that was the first one on which we could both agree.

The bowl had an unusual design that I describe as “feathered”. That’s probably not what it is called, but that’s is my best descriptor. The color didn’t really match anything in our living room or dining room, but we kept going back to it even though there were others of similar design with colors that would better match those rooms. I wasn’t quite ready to make a decision; I knew I still had time and Ravello was a short bus ride above our apartment.

A week or so later, I did go back and had a wonderful chat with the proprietor, Pasquale. I ended up buying the blue bowl which was to be shipped. Years ago, travelers were 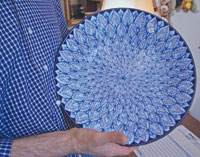 The bowl I just couldn’t live without. PhotoS BY VICKIE KELBER

warned against shipping anything from Italy as it might well arrive broken if at all. Now, though, with so many shipping services available, shipping is reliable. I was a little nervous as I’ve had bad experiences with Big Brown, but I knew I was putting the purchase on my credit card and ultimately, if there was a problem, the card company would intercede on my behalf.

On the way out, I priced a similar table to the one we looked at in Positano. It was 2000 euros less! I must have seemed surprised as Pasquale said that I would pay a lot more for such a table in Positano but he does not have to make as big a profit as they do; he is happy with a smaller profit. Altruistic certainly….maybe true, maybe not. My mind started churning again. I knew I still had time to make a decision about a table.

Ultimately, I did not buy a table. The more I thought about it, I really didn’t want one as a dining room table and it was impractical for the lanai. I am usually by myself when I have to move the furniture in during hurricane season and it would just be too heavy for me to handle. But, I had my bowl! Or, at least I would after it was shipped.

Two days after we arrived home, I received an email from the shop that the bowl was about to be shipped and was given the DHL tracking number. I never imagined how much fun it would be to track the travels of my bowl. It was a mini adventure…..kind of a cross between Where in the World is Carmen San Diego? and Flat Stanley!

On a Tuesday, at 11:47AM Ravello local time, the bowl was picked up. Later that day it was processed in Sorrento. I was relieved that it went to Sorrento rather than Naples. I’ve read all those accounts about who controls the exports and shipping in Naples! Let’s just say it is rumored to be a well known organized secret society.

From Sorrento, my bowl journeyed to Rome and then spent all day Wednesday in Leipzig, Germany. It arrived there at 2AM local time and left at 9:30PM. Leipzig is the European hub for DHL.

Thursday at 1:04AM local time it arrived at a sort facility in Cincinnati, DHL’s US hub, a location which reportedly processes 2.6 million pieces of cargo a month. Eight minutes later, it was cleared, two hours later processed, and by 4:30AM on its way to Miami. After an hour and half stop over in Miami, it was on its way to Ft. Myers where it arrived just after 11:00AM. By Thursday afternoon, it was delivered, unpacked, found to be in perfect condition and placed on a table in my living room. I am pleased to report the color is fine. In fact, I realized I had a Gzhel vase from Russia that is exactly the same color and it has now been taken off a shelf and is on the table accompanying the bowl.

If a trip to the Amalfi Coast isn’t in your immediate future, Ceramiche d’Arte has a web site at www.ceramichedarte.com. The other two shops mentioned above are online at www.mcpiccadilly.com and www.ceramicacasola.it. To avoid sticker shock, remember that in European prices, the comma is equivalent to our period. So, something priced at 350,000 euros is actually 350 euros.