Shells by Emily: a hidden treasure 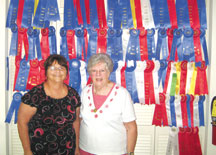 Emily Savage (right) stands among a few of her awards with assistant, Judy Daye.

When Emily Savage first moved to Marco Island the shells along the beaches were diverse and abundant. Today, many of those shells she so casually collected can now only be found in her shop, Shells By Emily.

In 1978 Emily relocated to Marco from Miami with her husband, Herb Savage. Their move made sense as Herb was an architect for the Deltona Corporation which initially developed Marco Island.

Not long after their move, Emily tried out shelling on the local beaches. On her first excursion she found a shell that no one could identify. It turned out that she had found a Baby’s Ear shell as well as a new career. She began shelling every morning, learning as much as she could about what she found. After three years she needed a space to keep everything she had gathered. She rented a small unit across from her husband’s office on South Collier Blvd. which has grown into the much larger store that it is today.

That growth didn’t happen overnight, however. As Emily explains, “when I first opened I was flying

Workshops by Emily offer the chance to learn to make flower shells; or purchase them premade. PHOTOS BY NATALIE STROM/COASTAL BRREZE NEWS

by the seat of my pants. I didn’t know a lot about what to do with shells. I was learning as I went.” She joined the Marco Island Shell Club where she met Doris Dufalt who taught her what to do with all the shells she had. Doris shared her knowledge of design and arrangement with Emily by coming to her shop twice a week for four hours at a time to teach her the proper techniques.

Proof of Doris’ teaching skills can be found in the 500 plus awards that Emily has won throughout the years for her shell work. She even created her own signature shell flower. The lotus flower was created when Emily received the wrong shipment of shells. As disappointment set in, Doris pushed her to try something new with them and the lotus flower was created. It was a blue-ribbon winner at that year’s shell show and was even bought by the judge on hand.

Emily’s shop features her awards as well as a tremendous amount of hand-made artwork. Most of the work is done by Emily 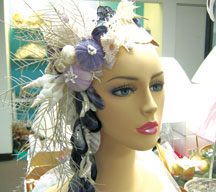 or her two assistants, Judy Daye and Jae Kellogg. All is available for sale and special orders are also accepted. They are often asked to design pieces for special events such as weddings.

Emily also holds workshops to allow others the ability to make beautiful pieces. For a $5 charge and the cost of materials, she is available by appointment to teach shell enthusiasts how to make their own art.

After nearly thirty years in business and hundreds of awards it is clear that Emily is fond of what she does. “It gives me something to do; something to love. Something to teach people and something to work with,” she explains of the hobby-turned-career. Of the opportunities given to her through shelling, she says, “sometimes a door is opened for you and you have the choice to go through it or not.” She chose to go through it. Open the door to her shop and you’ll be glad you decided to go through it too.