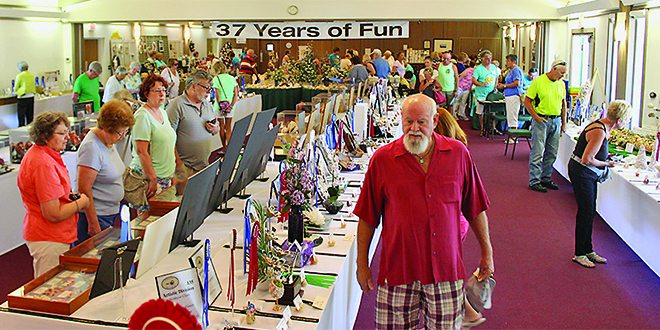 Visitors browse the over 150 exhibits at the 37th Annual Shell Show on Marco Island.

For three days a 2005 Volkswagen Beetle Convertible covered in over 200 pounds of seashells sat outside of the United Church of Marco Island. Passersby stopped to ogle at the vehicle, many getting out to take pictures and ponder its intricacy. The Volkswagen, also known as the Shell Love Bug, was there as part of the Marco Island Shell Club’s 37th Annual Shell Show.

According to the Fort Myers-Sanibel website, the Shell Love Bug is a “mobile work of art demonstrating the love of shelling that is so prevalent in our destination.” It was commissioned by the Lee County Visitor and Convention Bureau and designed by Pam Rambo using only found, local seashells. It was perfectly on-theme.

While the Shell Love Bug was definitely a must-see item, it was just the beginning. Inside the United Church of Marco Island the Shell Club set up an impressive presentation that featured over 150 scientific and artistic shell exhibits, a shell art gift shop and even a live shell tank.

Exhibitor Mary Ann Coke manned the shell tank. Like most of the exhibitors, shelling is just a 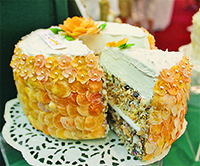 A “shell” cake made entirely out of seashells was for sale at the shell art gift shop.

hobby for her. And though she doesn’t have a major in marine biology, she can tell you absolutely everything you need to know about different types of mollusks, crustaceans and sea cucumbers. She had on display a giant hermit crab she found (dead, of course) and kept.

“Not everybody has a chance to see what the end of the giant hermit crab looks like,” said Mary Ann Coke as she displayed the hermit crab.

Long time Marco Island resident Emily Savage was also present. Emily is perhaps best known for her shop on Marco, Shells by Emily where she sold her shell art. The shop closed recently after being open for 31 years. She is also the wife of well-known islander Herb Savage.

Emily says that she was first introduced to shelling when her niece came to visit during her honeymoon. Her niece’s mother-in-law, a “shell aficionado” came along too. They went shelling together and Emily found a rare baby’s ear shell. A baby’s ear is a local seashell can be difficult to find due to its camouflaging white color.

“I just had the feeling that sometimes 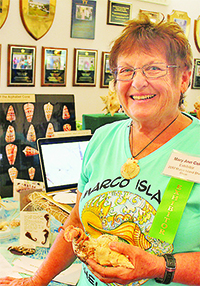 there’s a door opening for you,” said Emily Savage on finding the baby’s ear seashell.

This incident sparked her interest in shelling and would later result in the opening of her store.

“After three years of shelling everyday, it didn’t matter what the weather was I was just caught up in it, I opened my store,” said Emily Savage.

After 37 years, it seems that the Shell Show has once again demonstrated that a balance between science and art can exist. And that science and art, rather than singular concepts, are binary. Whether you came to buy some crafts or to see up-close displays of rare seashells, the Shell Show accommodated.

Proceeds from the Shell Show benefit the Shell Club’s scholarship fund. Doctoral students from the University of Florida’s Department of Integrative Biology are eligible for the scholarship as well as Florida Gulf Coast University graduate and undergraduate students studying marine or environmental sciences. The show also acts as a fundraiser for the clubs philanthropic efforts. Last year the Shell Club donated $3,000 to the Rookery Bay National Estuarine Research Reserve.

For more information on the Marco Island Shell Club check out: marcoshellclub.com.