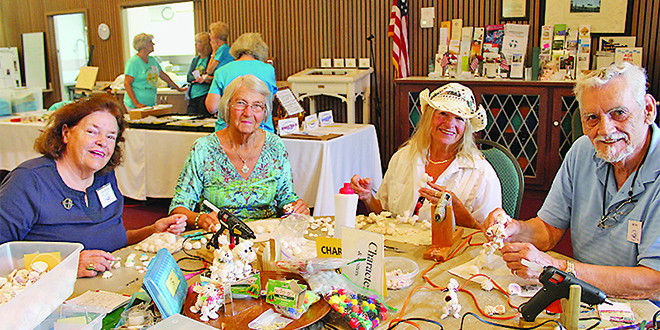 The club members met at Dissler Hall at the United Church of Marco Island. The same location where the upcoming show will take place. Rows of large round tables were set up throughout the room. Each table was comprised of about six to ten members and was equipped with hot glue guns and a creative theme. Chairman of the workshop, Becky Miller’s table was busy making parrots and fish out of shells. Other tables were creating intricate paperweights, bouquets of flowers, wreaths, jewelry, critters and mirrors.

For 37 years the Shell Club has been active on Marco Island. According to their official website, the club’s main objective is to “promote the study, conservation, history, and science of seashells and mollusks, and to encourage shell-related interests, such as shell collecting, crafting and shell art.”

Each year proceeds from the Shell Show go to benefit the club’s scholarship fund. Doctoral students from the University of South Florida’s Department of Integrative Biology are eligible. Florida Gulf Coast University graduate and undergraduate students in marine or environmental sciences can 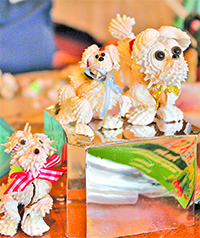 Each table had a different creative theme. This table was making critters out of shells.

also apply. The full list of rules can be found on their website (www.marcoshellclub.com). The club also raises funds for the Rookery Bay National Estuarine Research Reserve; last year they donated $3,000 to the organization. The club also donates and supports the Marco Island Academy.

The Shell Show will consist of a live shell tank presentation, over 150 juried scientific and artistic exhibits, shell art, crafts and raffles.

“The primary reason for the Shell Show is actually the judging of the scientific and artistic exhibits,” said Shell Club President Kathy Benedik.

This year Alan Gettleman from Merritt Island, Florida, and John Chesler from Plantation, Florida will judge the scientific competition.

“They judge on the quality of the shell. In other words is it broken? Is it perfect? They don’t want to see anything that’s been put on it. It’s got to be natural,” said Kathy Benedik.

Judges for the artistic category will be Sue Hobbs and Phil Dietz, from Cape May, New Jersey.