She Sells Sea Shells for Scholarships 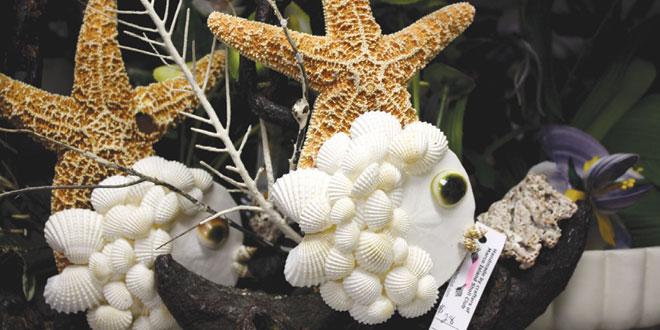 The Annual Marco Island Shell Show is back for its 33rd year of juried scientific and artistic exhibits, along with beautiful shell art and specimens that are available for purchase. The show takes place March 14th through the 16th, from 10 AM until 4 PM at the United Church of Marco’s Community Room.

The location of the show – 320 N. Barfield – is also where members of the Marco Island Shell Club gather on Tuesday mornings to create the juried exhibits and items for sale.

The annual membership fee for the Shell Club is a pricey $20 and I hadn’t paid. How, then, did I get in you ask?

I’m a journalist. That’s how. Invited to cover the Shell Show for the second year in a row, I decided I wanted to join in on the action and learn why there are so many members, how they do so well each year and how to make a shell flower. I asked Shell Show Chair Jae Kellogg if I could make some shell art for the day and she said, “Absolutely!”

It was fun to come back and see the women from last year like Jae, Sally Johnson and Carolyn Ginther. Jae and Sally got me set up at the “beginners” table where I quickly learned that just as I had met friends there the year before, many of the members formed friendships through the club as well.

I sat with Kathy Ferrier and Mary Ann Wolf. Jae and Sally helped teach us how to make a “buttonwood flower.” Mary Ann hadn’t joined yet so she couldn’t use the glue gun, but she picked out perfect sized shells for Kathy and me. As we talked, it turned out that both Kathy and Mary Ann were retired school teachers and had both gone to the same undergraduate and graduate school. They stayed only one condo away from each other on Marco and even used the McDonald’s for its free Wi-Fi service. Instant friends!

We made many buttonwood flowers until Jae moved us onto the next kind of flower, a name I can’t remember. But she did tell us the shell could 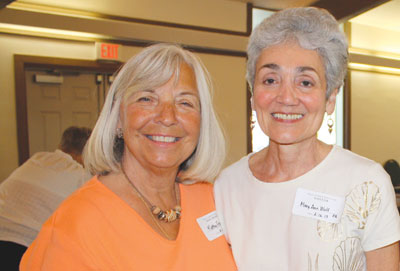 Kathy Ferrier and Mary Ann Wolf were“first-timers” like me. They learned theyhad much more in common than a desireto learn shell art.

be found on Marco’s beaches. This was a five-petal flower instead of the four-petal buttonwood we were making earlier. We were moving up the line – literally.

The whole room is set up a bit like an assembly line. Each table is up to something different. Whether it be picture frames, flowers, critters, Christmas decorations or shell arrangements, each table offers different forays and different experience levels.

The members, with their extremely expensive $20 annual membership are supplied with everything but a glue gun. The ladies recommend Shells By Emily on Marco to purchase a glue gun, but she also has an amazing assortment of shells and other beautiful items.

The Shell Club buys its shells in bulk – and there are shelves and shelves of them. The group has a huge selection to choose from.

The shelves of shells are held in the elusive “back room” where only those with a press pass (me) are allowed, unless they are one of the few that worked there. The back room is where many of the flowers that Kathy, Mary Ann and I made would be utilized. Only a select few members put together certain floral arrangements to be sold at the show. The arrangements feature different types of flowers from the “assembly line.”

Once the arrangements are finished, they are stored for the show. All members donate their work to the club to sell. If they want their specific shell art piece, they have to buy it themselves.

With such an expensive fee of $20 to join, why would anyone waste their time creating shell crafts that they can’t just keep? Because the revenue from the show goes toward scholarships. That pricey $20 fee doesn’t seem so bad when one knows it goes towards supplies that turn into art that turn into college educations. The Marco Island Shell Club sponsors three scholarships in Marine Biology at Florida Gulf Coast University. The club has also collaborated with Tommie Barfield Elementary and Rookery Bay in the past.

After my experience at the Tuesday workshop, I would absolutely join, but the last workshop of the season was held on March 5th. That’s because the club is now ready to showcase what it has been working on since November. See it for yourself March 14th through the 16th at the United Church of Marco Island. For more information, visit www.marcoshellclub.com.