As the STRP sewer project on Marco Island rolls through the hills of Caxambas, workers are digging up more than just dirt. Advanced Archaeology Inc. and Mitchell & Stark Construction have worked together throughout the historically sensitive area, unearthing thousands of early Native American artifacts and most recently, three intact glass bottles from the early 1900’s.

Located at the Southeast tip of Marco Island, Caxambas is known for its ancient Calusa shell mounds that later served as an early settlement in the Pioneer Era of Southwest Florida. One such pioneer and notable name was Jim Barfield. Settling in Caxambas, Barfield couldn’t help but notice the extensive

The Burnham Clam Factory operated from 1904 to 1929 under E.S. Burnham. PHOTO BY ALVIN LEDERER

clam beds throughout the area. Hoping to cash in, he offered 3/4 of an acre of waterfront land in Caxambas to wealthy businessman, E.S. Burnham. Thus, the Burnham Clam Factory was built and opened in 1904. Hardships, including the sinking of the Burnham clam dredge, caused the closing of the factory in 1929. The only other cannery on the island, the Doxsee Clam Factory, took it over but the factory was soon destroyed by a hurricane in 1932.

As construction workers laid sewer pipes this past month, a glass bottle was recovered by Foreman Joshua Alzamora. “The clam bottle was right outside of where the clam factory was,” said Alzamora.

it before it was broken,” said Gene Erjavec, Field Director for Advanced Archaeology, Inc. After reading the embossing, Alzamora quickly called Erjavec. Written across the bottle was: Burnham’s Little Neck Clams.” Erjavec explained that the glass had a purple tint, indicating that it was made prior to 1915. From the mid 1800’s until 1915, American glass was mainly made using manganese. Exposure to sunlight over time turned these bottles slightly purple.

Working with Advanced Archaeology has given the workers at Mitchell & Stark a chance to make their own discoveries. “My workers are down in the ditch looking at shells while we’re waiting for the next pipe. We pick up the shells to see if they may have been used [by the 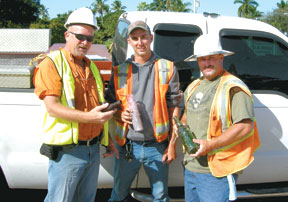 Calusas],” explained Foreman Jeff Eggleston. “Most of the bottles we found just lying on the side [of the trench] when we got out of our machines.” Two more bottles of historic interest have been found in this fashion.

After the Burnham Clam Factory was built, there was a need for housing for factory workers. Barfield built a lodging house and about 10 or 11 three-room cottages near the factory in Caxambas. Many of the cottages from the Caxambas Fish Camp were moved to Goodland in 1949 to clear Caxambas for development.

In the same area where the cottages once sat, an old brown beer bottle surfaced and was called in to Erjavec. Research found the bottle to be from the Peter Doelger Brewing

Made in New York, this early 1900’s beer bottle was found near the old fish camp

Company which was in business between 1863 and 1937. “New York” is embossed on the bottom of the bottle. Erjavec believes it to be from the pre-prohibtion era; before 1920.

The Heights Hotel was built on “The Heights,” known today as Indian Hill. It was also built by Jim Barfield and served as a home to him, his wife, Tommie, and their children. The home was enlarged over time to house 22 people and became a rather popular hotel and watering hole. It was known to host rich and prestigious guests. Not far from the sight, a tall green bottle of Amer Picon Philippeville was found by sewer workers. A French liqueur, the bottle is believed to be from the 1920’s or

Found near the location of The Heights Hotel, this liqueur bottle is originallyfrom France.

The bottles are temporarily on display at the Marco Island Historical Museum. Since they were found during Advanced Archaeology’s ongoing dig, they will be properly preserved as a piece of Marco’s history. “I get the call from the city and go out to the site and we are able to preserve these bottles,” said Erjavec. “It is people working together towards preservation. Everybody’s doing their job and doing it wonderfully. It’s fascinating to everyone. We have a museum that’s presenting a story line of Marco. Now we have objects that you can attach to those words and bring some life to it. We have actual evidence of the history of this area. Bottles are something that remain intact and they have a name to them and a story to tell.”