Service to His Community is Just Natural 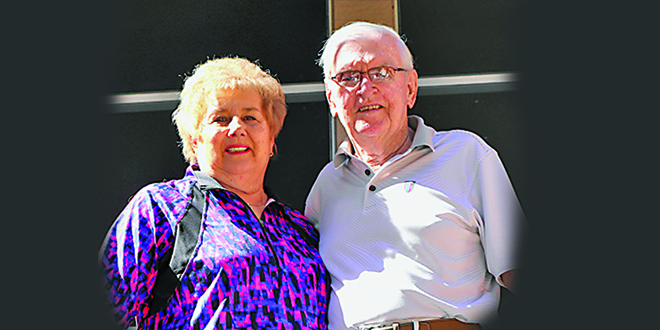 Since his arrival on Marco Island as a vacationer in 1987, Jim Curran saw something special in the small island he would eventually call his fulltime home. In 1992 he would purchase a unit at Smokehouse Bay Condominiums. In 1999 he and his wife Lori relocated here on a permanent basis and never looked back.

Jim knew what cold weather was all about, having grown up in Leominster, Massachusetts in a working class family. He also knew education was the key to his ride out of the old mill town just north of Worcester. Neither he nor his family had the financial resources to send him to college after high school, so he chose to join the U.S. Air Force during the Korean Conflict and served from 1951-54.

“I always had an interest in law enforcement, so I signed up for the ‘air police,’ but was put in avionics instead,” laughed Curran.

He would go on to Michigan State University on the GI Bill and graduate in 1958, with a degree in Business and Police Administration. When the Oakland, California Police Department came to campus to recruit the recent graduate, Curran thought long and hard about an offer before passing on the opportunity to join that very urban police department in L.A. County.

A year later he would be recruited for a position with Sears and Roebuck in loss prevention. His first assignment was in Buffalo, New York, and the work he did there uncovered a theft by management and employees which would save the company tens of thousands of dollars in lost merchandise.

Curran would stay on with Sears for his entire professional career. He would move around the northeast in various assignments, working his way up into a number of high-level managerial jobs where he would excel.

1992 would see him retire, and he and Lori purchase their first condominium on the island and enjoy it on a seasonal basis before moving south fulltime in 1999. They would purchase a larger condo which more suited their fulltime status here on the island.

Not being one to sit on the sidelines, Curran quickly became involved in a long list of civic and charitable endeavors that would keep him busy on a fulltime basis.

One of the accomplishments he is most proud of is helping to create the committee, “Citizens for a Safer Marco,” which was the catalyst to maintaining Marco’s own police department. “We knew as we grew as a community we would need to control our focus for protection of citizens and property here on the island. It wasn’t that we were against the Sheriff’s Office, but we wanted to insure we had the level of service citizens desired,” said Curran.

A few years later in 2007 he would also be a moving force in creating the Marco Island Fire Foundation, which mirrored the support being given by Marco Island Police Foundation to law enforcement professionals and their families on the island.

“We knew as we grew as a community we would need to control our focus for protection of citizens and property here on the island. It wasn’t that we were against the Sheriff’s Office, but we wanted to insure we had the level of service citizens desired.”

Curran would also be a major player in many other organizations on the island to include being on the Board of Directors and President of the YMCA, serving on the Advisory Board of the Marco Community Bank, a member of the Knights of Columbus, past President of both Smokehouse Bay and Club Marco Condominiums, a member of the Marco Island Civic Association Board of Directors, an usher at the San Marco Catholic Church, member and President of the Sunrise Rotary Club, appointed to the Advisory Board of the Naples Community Hospital and a graduate of both Leadership Marco and Leadership Greater Naples.

This is a short list of Curran’s accomplishments since arriving on the island fulltime. He has also been recognized by numerous organizations for his contributions, which includes being named the Citizen of the Year in 2004.

Curran is quick to turn to his wife Lori, whom he married in 1986, and says she equally shares the burden of his work within the community. “I couldn’t have done any of this without her support and confidence,” said Curran. Between them they have six children and eleven grandchildren, which they are outwardly proud of.

As Curran looks around his small office/den in their home, he’s quick to smile and beam with pride at the various pieces of memorabilia that adorn the walls and his desk. He has a story for each one, but there are two items he’s particularly proud of. The first is a proclamation that was presented to him by his good friend Mike Minnozzi, who at the time was then Chairman of the Marco Island City Council. That proclamation recognized Curran’s accomplishments on behalf of the city.

The second one is a ceremonial axe, which was presented to him by the Fire Rescue Foundation when he stepped down as the Founding Director and President of the organization.

Although he has slowed down a little, Curran and his wife can still be seen out at a number of events and organizations that they both support, and they stay active in the community. “We just love this island,” said both Jim and Lori as they gazed over water spraying up from the fountain behind their lanai.

This is the first in a series of articles the Coastal Breeze News will bring to its readers, highlighting local individuals that truly exemplify the commitment to making this a better community for all.