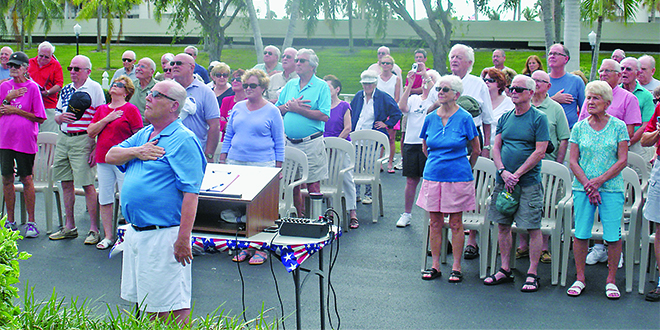 Attendees salute the flag at the dedication ceremony.

The South Seas East Condominium Apartments chose to make the dedication of a new flagpole and flag at the highrise’s entrance a truly reverential affair.

Held on the “day that shall live in infamy,” the ceremony was a solemn one that honored those who were killed and injured that Dec. 7, as well as the sacrifices of all of the nation’s veterans.

About 50 residents turned out for the function, which included a presentation of colors by members of Marco Island American Legion Post 404, remarks by veterans and Dr. Maurice Allard, president of the South Seas East Board of Directors and others, and a live playing of “Taps.”

“We’re doing this in honor of the 75th anniversary of the attack on Pearl Harbor and to honor all of our veterans,” said Tom Graves, in opening the ceremony, which he organized along with Allard. 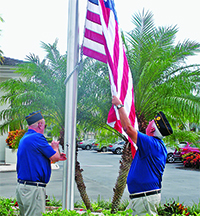 the board decided to replace them earlier this year.

“I knew we have a lot of vets here,” he said after the ceremony. “I knew this would be something very important to them. I wanted it to be something nice and I wanted to dedicate it to the vets. We need more of this today.”

Graves read a poem entitled “Your Flag and My Flag,” written by Wilbur Nesbit in 1904. The first stanza reads:

YOUR flag and my flag,
And how it flies to-day
In your land and my land
And half a world away!
Rose-red and blood-red
The stripes forever gleam;
Snow-white and soul-white
The good forefathers’ dream;
Sky-blue and true-blue with stars to gleam aright—
The glorified guidon of the day; a shelter through the night.

Allard discussed how “Taps” came to be.

He said a Union soldier was surveying a civil war battlefield in the aftermath of fighting and saw a young Confederate soldier lying nearby, who was teetering on the brink of death. The Union 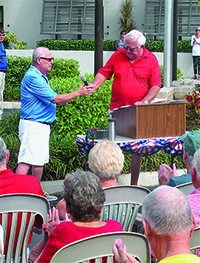 soldier carried him to the Union camp to receive medical attention. As the doctors went about their work, the Union soldier then realized that the young man was his son.

The young soldier couldn’t be saved, said Allard, and when the father checked his son’s pockets, he found a sheet of paper with music the young composer had written.

Allard said the father next asked a bugler to play the music, which became the song we know today as “Taps.”

Bill Filbin and Harry Weathers of American Legion Post 404 handled the presentation of colors, as well as lowering the flag to half-mast in commemoration of the Pearl Harbor attack. Filbin also took a moment to address the crowd, telling them that it’s important to never forget the service of our veterans and to honor those who serve today.

Those sentiments were echoed by WWII veteran Joe Burkhart, a South Seas East resident, who also implored those within earshot to “remember and pray for our troops.”