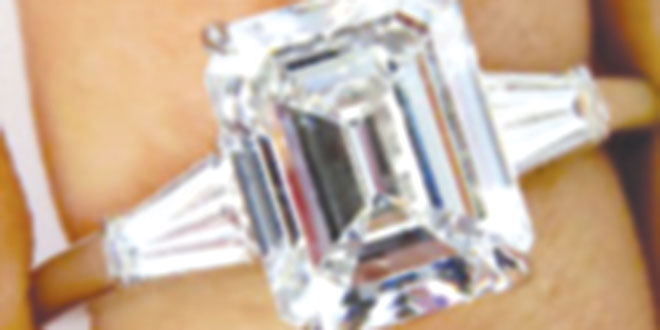 I don’t know. Sometimes, it feels like I am a rock; I am an island, not just living and working on one. Heck, I can go weeks — even months — without even leaving the island!

I just finally realized I’m not a kid anymore. (My AARP membership proves it without a doubt!) Even so, one of my customers called me “kiddo” the other day. For crying out loud, I’ll be 61 soon. When will people finally consider me as being a full-fledged adult? I’m told I don’t look my age. I sure feel it!

Call it a wonderful curse. It’s my mother’s fountain of youth genes. When I was running my own jewelry business at the tender age of 20 (I looked like I was 14), a customer upon entering the store asked me where my father was?

He demanded, “I need to see the goldsmith!”

I answered, “My Dad’s not here, and by the way, he’s a plumber, and won’t be much good to you and that broken ring!”

“But you’re a kid!” He was completely flabbergasted I was the resident goldsmith and store owner.

I promised him I knew what I was doing. He was at first hesitant, leaving it with a pimply faced “kid.” I completed the complicated repair, and called him the next day to pick it up. I’m not sure if he was thrilled, surprised or relieved. Nevertheless, he paid me, and he was my first regular customer. It was tough back in the 70s and 80s, getting folks to accept a fresh-faced kid selling diamonds, gems and gold jewelry who looked like he should be delivering newspapers.

Am I sentimental? I admit I am. A lot of the equipment in my workshop dates back to the late 1800s, and next to that stuff is a state-of-the-art laser welder and a computerized casting machine. Most of my hand tools belong to my “masters.” (The masters were my two uncles, Ernest and Richard, who taught me the trade as a beginning apprentice at age nine.) My actual workbench was presented to me by his widow after my master diamond setter Carmine Fuchetti passed away in 1980. Carmine taught me old-school, hand-diamond-setting techniques. He was the most talented diamond setter in Boston for more than half a century, and Carmine was in his late-80s when he taught me.

Over the years, both my son and the various apprentices I taught learned to respect and maintain this legacy of antique jewelry making equipment. I hope my future grandsons will feel the way I do about it.

Sentimentally foolish! I see that a lot. I have been buying old jewelry and gold from the public for many years now, and sentimental pieces show up now and then. I can understand many times it’s a matter of really needing the money, but mostly it’s not. Old Aunty Griselda’s passing left a heaping box of jewelry with unknown value. Let’s sell it and get the cash. Many times it’s not worth enough money for a happy meal, and other times it’s like hitting the lottery.

You just don’t know. Even some crummy looking antique costume jewelry can be valuable especially if it’s Civil War or Victorian era. One thing always irks me, though. First of all, sentimentality, as far as I’m concerned, seems to have gone out the same window the typewriter. The current generation pretty much wouldn’t give a rat’s derrière for something from a deceased loved one unless it’s cash. Am I being a bit harsh? No, seeing is believing, my friend. I’ve had bereaved spouses or kids selling off Dad’s gold rings, money clip, belt buckle or worse his gold teeth immediately after leaving the burial ceremony. To me, that’s colder than the newly departed.

Such is life, many of you young-uns may accept it. I can’t. Going through a box of a departed loved ones jewelry is an emotional roller coaster that can be a tearful experience for the seller and yours truly. A high school ring she wore around her neck telling the class of 1940. You two were an item, and she wore that ring every day, week and year you were fighting in Europe, and he wore that simple sterling silver I.D. bracelet she presented to him with hand-engraved script letters “Come back to me” the day he shipped out. Some of us would appreciate and cherish this sentimental jewelry; most don’t, and sell it for a mere few dollars. I have purchased great-great-grandparents original wedding bands from Europe to be scrapped along with 1970s disco neck chains. Don’t look at me like I’m the bad guy here; I’m the one who points out the inscription inside the wedding ban: GHT to MBT April 12, 1862. What would possess anyone with the idea to scrap something like this for $60 or $70?

Okay, back to me looking like the bad guy. The thing is sentimental pieces of jewelry that may mean a lot to you don’t mean squat to people who buy gold from the public. If I detect even a minuscule bit of hesitation from a seller, I will suggest they take the piece home and think about it because after 30 days I’m going to melt it into an ingot, and that’s all she wrote. It’s gone — the ancient history you no longer possess. Once a few years ago, I had a distraught seller change her mind after a few months, wanting her grandmother’s band back. I regretfully had to tell her it’s gone forever.

It’s not always a depressing experience. Around 10 years ago when I was at my Front Street location, three sisters came in with a small silk bag of a recently deceased aunt’s jewelry and asked if I would separate the wheat from the chaff so to speak. I wasn’t all that busy at the time and gave my condolences and said no problem. Most of auntie’s baubles were not valuable, but there were a few gold pieces the sisters divided up between themselves. Thirty minutes later that was the end of it, or so I thought.

One of the sisters pulled a ring out of her pocket. She was embarrassed to show me because it was so ugly. It was a large nugget ring with a considerably sized and dirty emerald, cut-glass center stone. “It’s costume, right?” she asked.

At first glance, it appeared to be, although it was gold. Once I cleaned it and examined the “large glass stone” I gasped, “Ladies, this is a real diamond!”

At this point, everyone’s jaw is on my showcase. I completed a full examination, and without a doubt, it was approximately four carats of one of the most beautiful diamonds I have ever laid my eyes on. At that time, I estimated its value was around $100,000! When I told them this, the surprise went from euphoria to he’s slinging us a cart load of B.S.

It gets better. A half hour later one of their husbands called me and lambasted me for getting the girls hopes up about the junk ring. Once again, I offered the ten-grand. He stammered for a few seconds: “We can’t figure out how she would have come to possess such a valuable diamond. She lived a modest life. She spent the last 20 years in a nursing home. No one ever saw her wear that ring.”

I asked how old was she when she passed away? Mary was 98.

My romantic guess would be it may have been reset from an original engagement ring that was presented to her from a fiancé that may have gone to war and never returned. Wearing the ring may have caused emotional pain that proved to be too much to bear, and she reset it in the 50s or 60s to that current ugly one and never wore it. Heck, then there is reality. Mary could have won it with a straight flush on Thursday poker night at the Shady Meadows retirement home. Who knows?

Richard Alan is a designer/goldsmith and owner of the Harbor Goldsmith —Marco’s Island jeweler for more than 20 years — located at Island Plaza, and welcomes your questions about all that glitters. Call 239-394-9275 or harborgoldsmith@comcast.net.

It’s Always One Thing or AnotherIt’s Okay to Be Itty BittyNo Is Not an Option?