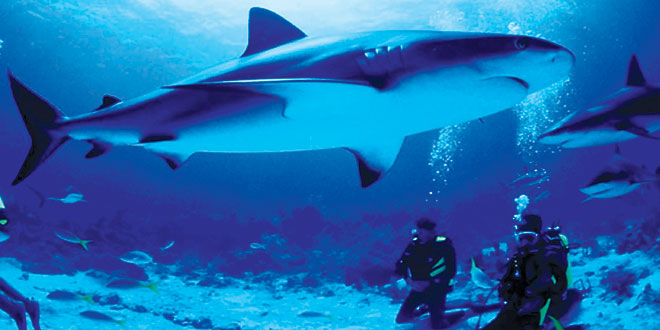 If you haven’t heard, its Discovery Channel’s annual Shark Week — a week of pseudo-science and, sometimes hilarious, propaganda.

Since 1988 — yes for 26 years and making it one of the longest running cable television series — this annual week of television programs on the Discovery Channel has evolved from educational programs that raised awareness of shark population decline and the importance they have in the oceans’ ecosystems to fictitious stories and ludicrous accounts of mega sharks in the waters throughout the world. Entertainment has trumped science, which does not bode well for the sharks’ conservation. The bloodletting episodes during Shark Week and bloody, distorted remains typically seen hanging on display after a “big catch,” hardly represent a living shark, an animal that has amazing, graceful and powerful swimming and survival capabilities.

Sharks collectively are among the most common large vertebrates, but there is relatively little known about these fast-moving, far-ranging fish. They are difficult to study, but as scientists push deeper and deeper into the oceans, more valuable information is and will be unveiled. Locally, sharks in the nearshore waters of Marco Island are very common and range in size, types and habitat needs. All play a very important role in a healthy marine ecosystem. Though, if you have been watching Shark Week over the past few years, you may think each time you step into saltwater you could lose a limb, but here is some perspective: Since 1882, (yes, circa 1882) the International Shark Attack File has recorded 687 unprovoked shark attacks with 11 fatalities in Florida. Collier County has contributed only 7 attacks; no fatalities.

Here are just a few local species of sharks to be on the lookout for:

Bull Shark: (Carcharhinus leucus) Southwest Florida, particularly the 10,000 Islands, is home to a very large population and a nursery ground for this species. Pale to dark grey on its back (dorsal) and white below, the fins of the young are black-tipped but fade in older sharks. The snout is very short; shorter than width of mouth. Size can be as heavy as 500 pounds and 11.5 feet in length. A very aggressive shark while feeding in nearshore waters near sandbars and in estuaries.

Great Hammerhead: (Sphyrna mokarran) No one can mistake this species, considered to be one of the most advanced shark species and very dangerous to humans, with its flat, wide head, a nearly straight anterior margin of the head with a deep indention in the center and its eyes located at the ends of the broad head giving it a 360 degrees ability to see. They feed on rays, fish and other sharks and tend to not be cautious or afraid to approach people. It can reach 20 feet in length.

Bonnethead: (Sphyrna tiburo) With a rounder head and only reaching 3.5 feet in length, this species of “hammerhead” is commonly along the nearshore waters traveling in schools of 5 to 15 individuals feeding on small fish, shrimp, mollusks and crabs. Fishermen frequently catch this species. They should be released alive.

Tiger Shark: (Galeocerdo cuvieri) Another very large shark that can exceed 18 feet and weigh up to 2,000 pounds, it is bluish/greenish gray to black above and dirty yellow to white below with the back having a mottled appearance as a juvenile and coloration forming bars or stripes in large sharks, hence its name. The caudal, or tail, fin is very long and pointed.

Nurse Shark: (Ginglymostoma cirratum) A sluggish shark, commonly seen lying motionless on the sea bottom near reefs or sand bars, it is medium to dark brown on top and lighter on the bottom; juveniles are spotted. It has long tapering nasal barbels, and the first dorsal fin originates back over the pelvic fin area. It can grow large, up to 8 feet and 350 pounds, but is not aggressive, though one should always show caution.

Conservation of sharks is very important to the health of the marine ecosystems. Sharks are top predators in the Gulf of Mexico (and all other oceans) and tend to have lower population numbers than other fish. They have slower growth rates, mature later in the life cycle and have less offspring. Overfishing can decimate a population quickly, and it could take generations to recover.

Due to these factors and to protect the marine ecosystems, there are regulations to shark fish. A saltwater fishing license is required in the state of Florida to recreationally (and commercially) fish for sharks. There are size and number limit requirements for different species. All Florida fishing regulations can be found at www.myfwc.com/fishing/saltwater/recreational/.

If you are fishing and catch a shark, handle with care while removing the hook and do release the shark alive. There is no need to kill a shark just for the fun.