Senior Javier Camargo the 2017 Youth of the Year

Drafted by the Buffalo Bills in 1985, Reed played 15 seasons and in four Super Bowls, eventually being inducted into the Pro Football Hall of Fame in 2014.

Twenty-one Boys & Girls Club youth nominees, ages 14 to 18 were recognized for displaying outstanding leadership, service, academic excellence, moral character and dedication to living a healthy lifestyle during the past year. Through a presentation of speeches prior to the event, Youth of the Year candidates illustrated how they have turned their 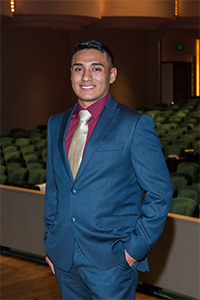 aspirations into actions and overcome personal obstacles to achieve success.

Eighteen-year-old Golden Gate High School senior Javier Camargo was awarded the coveted 2017 Youth of the Year title. He will receive a $6,000 college scholarship and will go on to compete at the state level for the opportunity to receive up to $50,000 in college scholarships and an induction by the President of the United States. Javier plans to attend Florida Gulf Coast University in the fall and double-major in criminal justice and psychology in hopes of becoming a detective.