Sen. Richter talks gaming at Lunch with the Chief 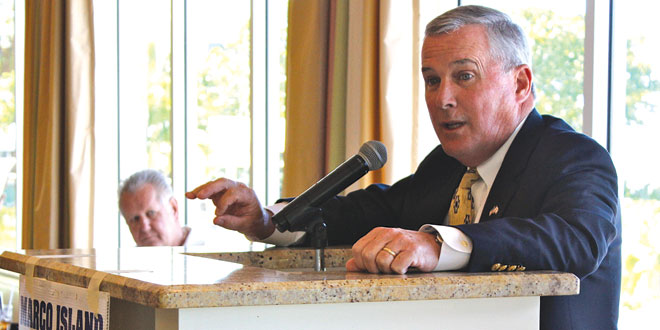 “It was almost 26 years ago,” he explained. “A gentleman knocked on my door. It was August in Naples, and we had just moved to Naples from Pittsburgh. I opened the door… This man put his hand out and said, ‘my name is Don Hunter and I am running for Sheriff’.”

Richter also regaled the luncheon audience with a true tale of gambling in the state of Florida. The gaming industry tops Richter’s list of priorities for the upcoming Florida Legislative session convening March 4, 2014. The chair of the Senate Gambling Committee, he discussed the possible creation of a state-regulated Gaming Commission.

To be sure, gaming in Florida is a hot topic right now for three reasons.

Second, because of gambling’s economic prowess, many are interested in expanding its reach in Florida. Several Las Vegas casino big wigs have expressed interest in building a casino resort in South Florida. To this end, the Florida Legislature commissioned a $400,000 study to evaluate the economic and social ramifications of growing the gambling industry in the Sunshine State. New Jersey-based Spectrum Gaming Group presented its findings to Richter’s committee in October, and five public workshops were held around the state to discuss the results. A copy of the gaming study can be accessed at the Senate-sponsored web site www.flsenate.gov/topics/gaming.

Finally, there is the state’s five-year, revenue-sharing gaming compact with the Seminole Tribe of Florida. While it provides the tribe with exclusivity on banked card games like black jack and baccarat, it also requires the Seminole to pay the state $1 billion over the five-year term. The agreement is set to expire in July 2015.

It has been a lucrative deal for both parties. The Seminole own six of Florida’s seven casinos, including those under the Hard Rock moniker. During its last fiscal year which ended July 30, 2013, these casinos produced $1.98 billion in revenue. According to state economists, those revenues will grow 3.5 percent this fiscal year to $2.05 billion. For the state of Florida, the agreement brings in a minimum of $233 million each year from the Seminole Tribe, and thanks to its recent banner year, the Tribe put an additional $4.2 million into the state’s coffers.

Richter described the agreement like this: “If you don’t think exclusivity is a good deal, I learned the other day that the most profitable casino in the world is the Hard Rock Cafe in Tampa. Exclusivity is a really good thing as long as you have got it.” If the Seminole Tribe and the state do not renew their agreement for another five years, though, both sides lose. The state loses its guaranteed $1 billion in revenue payments, and the Seminole Tribe loses its monopoly.

According to Richter, these three components may push the creation of a Gaming Commission to regulate a multi-billion industry currently policed by a licensing bureaucracy headed by the Florida Department of Business and Professional Regulation. Richter told the Lunch with the Chief audience that more needs to be done.

“We have to go through the statutes as they are now and identify the ambiguities and inconsistencies because it has been a patchwork of legislation that has just been created or developed over the years that needs to clarified,” said Richter. “I think we need to establish a framework for a Gaming Commission if in fact the state is going to expand gaming. One thing became clear out of the study, and that is we are in fact a gaming state.”