Seeking Soviet Spies on the Subway 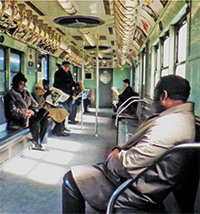 During the 1960s, the Cold War with the former Soviet Union had reached fever pitch. The epicenter in the U.S. was New York City where diplomats from the Soviet Union and its satellite nations were stationed. Many of their establishments were well-staffed with spies placed there by the First Chief Directorate of the KGB.

J. Edgar Hoover sent a lot of agents to New York to keep track of these guys. Unfortunately, I was one of those agents.

I had spent a year at the State Department’s language school at Arlington, Virginia learning a foreign language. Unbeknownst to me, this would result in a transfer to New York and an assignment to its over-staffed foreign counter-intelligence squad. That’s how, in 1966, I found myself in a dimly lit and dingy station of the Lexington subway line in lower Manhattan.

My assignment was to follow a (Soviet satellite) spy from the consulate to his place of residence to see if he met with anyone on the way. We were aware of when he would emerge from the consulate and head uptown. Sure enough, the guy appeared, as scheduled, but ducked into the subway as the doors were closing, just like in the movies. Only this time, the G-man was standing there with egg on his face. There was nothing to do, but wait for the next train which actually made no sense except just standing there made less sense.

Well, I thought, at least this guy still doesn’t know he is being followed. About three stops up the line, I saw the diplomat standing on the platform, outside my car. I have always had good luck in my Bureau cases and this looked like more of the same. As I was getting set to exit the car and resume the surveillance, the spy gets in and brushes past me. That was a close one, I thought. I sat down thinking this may work after all.

Then, he got up and comes to where I am sitting. I buried my face in a newspaper hoping he wouldn’t notice me. Horrified, I felt his hand on my shoulder and shuddered to think what might happen next. I felt for the reassuring heft of the Smith and Wesson revolver on my hip. “I am sorry to have inconvenienced you,” he said, “I didn’t realize you were trying to get onto the train until the door had closed and you were left standing on the platform. I got off the train up the line, hoping you could catch up with me. I would be honored for you to accompany me home.”

The next day, in our offices at 201 E. 69th Street, I wrote what had to be one of the most complete surveillance reports ever.