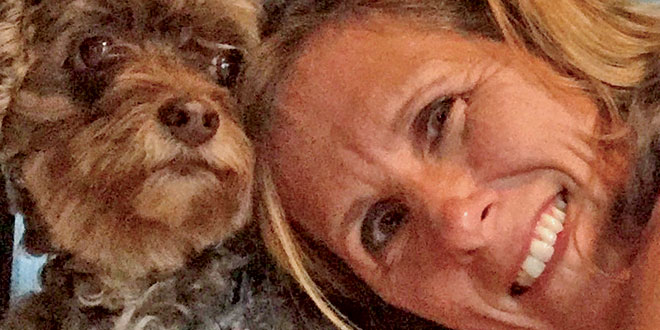 Photo by Laurie KasperbauerMe and Mocha on another thunderous afternoon.

My mother still lives in the same home she and my dad bought in 1964. It’s a modest 1920’s bungalow, located on a quiet street, in a rural Iowa town. When they bought the home, they were able to acquire some of the furnishings that were already in it. One such piece was a large, veneer buffet in the dining room.

Right away, the word “buffet” might bring to mind an “all-you-can-eat” smorgasbord, but this buffet was instead a very functional piece of furniture. It had a broad top where food-filled dishes were laid out at holiday mealtime. From the table-top cover, wide walls of drawers spanned to the floor on either side, creating an opening underneath. And this opening became my sanctuary for as long as I was small enough to fit in its confines.

This unique little niche was a hiding spot, a fort, a doll house, and a refuge. But on stormy, summer nights, it was my comforting shelter from lightening and thunder.

I used to be terrified of storms. I lived in fear of tornados. And the flash of lightening and crack of thunder would send me scrambling to my spot under the buffet, where I’d squeeze my eyes tight until the rumbling softened, and the bright flashes dimmed.

Now I live in the “lightening-strike capital” of the country, and during the summer months here in Southwest Florida, lightening and thunder are as familiar as beach chairs and coolers. And while I still have great respect for lightening, I have grown to find an odd peace in the noisy eruptions of Mother Nature. Unfortunately, I can’t say the same for my dog, Mocha.

Recently, here on Marco Island, we had an unusually loud display of atmospheric upset. It was in the late afternoon and I was just heading to my yoga mat on the lanai for a good stretch after hours at my desk. Mocha always seems to know when the weather is coming before I feel the first vibration of thunder. She begins following me around the house, lightly licking my calves when I pause, or laying on the tops of my feet when I stop. By the time I determined it would be wiser to practice yoga inside, Mocha was entwined in my ankles, making it hard to move forward. So I stopped and unrolled my yoga mat there on the living room floor, and settled into Child’s Pose.

If you’ve ever practiced yoga, you know that Child’s Pose is a wonderful posture that is both a gentle stretch and a calming beginning to many yoga sequences. I nearly always start my own yoga practice with Child’s Pose. Starting on hands and knees, I press my hips toward my heels as I reach my arms long toward the front of my mat. I use this posture, known as Balasana to draw my attention inward and separate the moment I am in, from everything else in my day. As I breathe into the posture, I’m able to melt even closer to the mat, leaving only a small space between my chin and my chest…just enough space it turns out, for a 14-pound dog seeking comfort from a storm.

Beginning with her nose under my armpit, Mocha burrowed her way with determination and precision; staying low to the ground, and following her instinct, until she had completely filled the few inches of daylight between me and my yoga mat. My heart was literally pressing into her shoulders, and I decided at that moment, my yoga practice would be profoundly enhanced by her presence. And so it was.

From my compressed state in Child’s Pose, I rose to Hands and Knees for breath work, and then up to Downward Facing Dog. All the while, I canopied Mocha where she sighed big breaths of relief and her trembling came to an end. We completed a good yoga sequence together, Mocha and me. I twisted and lengthened with her resting silently at the center of my mat, and when at last I nudged her to the side so I could rest in Savasana, she licked me lightly on the cheek and wondered off on her own. Storm over. Calm restored. Gratitude for compassion, quietly conveyed.

I can’t think of a single time I have practiced yoga and regretted it. No matter the length of time I spend on the mat, or who is leading the practice, I always feel better in the wake of a yoga session than I felt going into it. Between the deep breathing, the stretch, and the practice of “paying attention” to the moment at hand, I step off the mat in a calmer state than I started in. Who knew that practicing yoga in a thunderstorm, carefully balanced over a shaking puppy could magnify the bliss? So, once again, I learn lessons from an 11-year-old pooch:

Lesson 1: It’s a good idea to find shelter in a thunderstorm

Lesson 2: When seeking comfort, be persistent

Lesson 3: A warm body beats an antique buffet any day of the week.