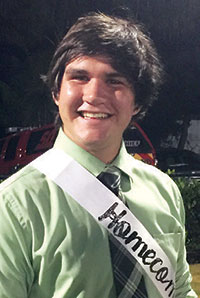 On January 23 three students will be honored for the top three essays in the Collier County VFW Voice of Democracy Essay Contest at the VFW Post 7369 on Pine Ridge Road in Naples.

Dick Miller, one of the VFW 7721 committee members to judge the contest, said that Marco Island Academy (MIA) students led the county in the number of entries.

“The teacher, (Lori Galiana) has really gotten her kids motivated.”

Galiana’s MIA government class was prepared for the topic, “Ambitions for America,” by viewing the presidential debates. She divided her class into two groups, with half writing essays for one of two Naples VFWs. She has not heard from the other VFW, 7369, but expects it will be soon.

As part of her government class she also taught the kids about voting. Her class was the county winner for having the highest percentage of registered teenage voters. Jennifer Edwards, Collier County Supervisor of Elections, conducted the contest as a means to educate and have more young voters registered throughout the county.

Flynn’s essay has been submitted to the VFW district contest, which covers Port Charlotte to Marco Island, Miller said. The results will come later this month.

My Great Grandfather was a brother in the Catholic Church for the Irish Clergy. He studied at Trinity College located in Dublin, and taught Latin to the Catholic school boys at a small Catholic school located just on the outskirts of Limerick, just off the shores of the River Shannon.

I am Sean Thomas Patrick Flynn and yes my name gives it away that I am Irish by blood, but more importantly I am an American. I am Proud to Be an American. Our Generation is full of social and economic issues and yes the world and this country is unstable. The greatest problem I see though is the Lack of American pride, an idea or message that seems to be dying as I speak to you now. In my eyes it seems to be that American pride has hit the fan and people have lost faith in this great country. That it is normal to not say the Pledge of Allegiance, to not have an American flag in your home, to not stand up and put your hand over your hear and stand to attention when the national anthem is playing. This to me is disgusting, and this lack of American pride is our nation’s number one problem. My vision for America is to revive the sense of American Pride back into the hearts of every American.

As stated before American pride has hit the fan. Many Americans lack the mindset of American pride. They worry about fixing other problems our nation is facing but without the mind set of being proud to be an American they set themselves up to fail. If you are a doctor do you go into the operating room to perform surgery do you think to yourself “yeah this patient is going to die”? No, of course not! The same thing applies to American Pride, how do you fix a nation if you have no faith in it? Many people have seen many our nation’s problems hit the fan and try to clean up the mess but that is not the first step. Before you can clean up the mess you have to turn off the fan! The Fan not having faith in American Pride! That is an idea, and no action can beat an idea, only an Idea can Fight an Idea. The idea of American pride can fight that.

I can go on and on about why you should be proud to be an American but there is one thing that everyone should be proud about. Like I said early I am Disgusted to see the lack of American pride. I am free to say and believe that to you but you are also free to disagree. You are free to disagree with me, to say what you want, think what you want, believe what you want, and you are even free to leave if you want. With those conflicting and opposite views there is one thing they have in common, one word, and that is Free. You are free, to do whatever you want! In many places around the world if you don’t agree with the majority you can be imprisoned, maybe even executed. Here though you are free. I do not know of one person that would not be proud to be free. To be an American is to be free, so no one has an excuse to not be proud to be An American because you are free. Freedom is the thing as an American should all be proudest of. Ideas like that will put American pride back in to the hearts of every American.