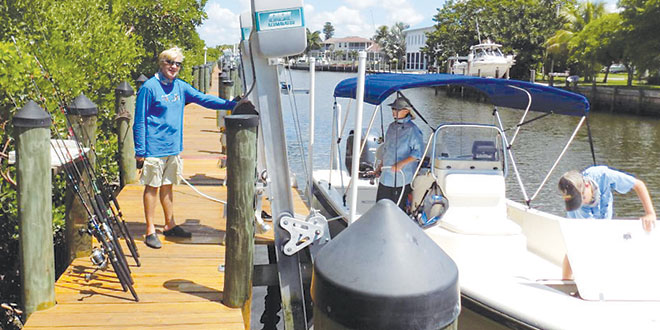 After spending much of his life on the high seas, Svein Sleipnes (pronounced “Sven Slipeness”) has chosen a quiet canal-front residence in Goodland to ultimately spend his retirement. Svein and his wife Katherine, along with sons Hans, 15, and Christian, 12, became my neighbors in 2011. Like many on the east coast, they were attracted by the uncrowded west coast, and particularly by the leisurely laid-back lifestyle of Goodland. Being on the water with great fishing next door didn’t hurt.
Svein Sleipnes was born in 1957, in the picturesque town of Volda on the west coast of Norway. It is a town of about 3,700 residents, located on one of Norway’s beautiful fjords. “Practically all Norwegians living on the west coast live on Fjords,” Svein told me. Most have a seafaring past dating back to the Vikings in the 9th century. Norsemen reportedly were the first Europeans to set foot in North America, and were the undisputed most skillful and bold seamen of their day. Svein’s father was a bosun on a coastwise freighter, and both his brothers are employed in the shipping industry.

When Svein graduated from high school in 1973, he got a job as a deckhand on a coastal freighter. “I wanted to get out on the sea, and never really considered doing anything else,” said Svein. So closely connected to the sea are Norwegians, that practically every coastal town has its own maritime academy. In 1976, Svein began three years of study in one such academy at Volda. He emerged with a captain’s license for unlimited tonnage. “I became qualified to captain the largest ships then being built,” said Svein. Although

The Norway, pride of the fleet, ferrying passengers to shore.

qualified, it was unlikely that an inexperienced Svein would be hired to captain a large ship right out of school. To advance his career, Svein enrolled in the Norwegian Naval academy at Bergen, where after a year he was made a sub-lieutenant and served as executive officer on a 200-foot Norwegian Coast Guard cutter.

In 1982, Norwegian Cruise Line (NCL) hired Svein as First Officer on one of its liners. The first officer is in charge of navigation and reports directly to the second in command, the staff captain. Starting at a two-stripe rank was an auspicious beginning. After this, things moved rapidly for Svein. “At NCL, I went from first officer to captain in just 9 years,” said Svein. In 1991, at the ripe old age of 33, Svein got his fourth stripe and became NCL’s youngest captain. During this period, he had devoted himself entirely to his job and loved his life at sea.
Svein’s priorities started changing in 1987, when he was the Chief Officer (a 3-striper) on the 1,035 foot Norway, the pride of NCL’s fleet, and at one time, the largest liner in service. The Norway was easily Svein’s favorite ship. Svein made regular security inspections of the entire ship during the voyage. He became particularly interested in the security of the ship’s perfume store. Katherine Patch, a hazel-eyed beauty from Miami was running the store. Soon Katherine noticed that Svein, a handsome high ranking ship’s officer, also started showing up at ship’s events which she attended, usually finding a place at her side. One thing led to another, but the smitten Svein was told in no uncertain terms, that Katherine would not

be open to matrimony unless he got a land based job. Svein, who was advancing rapidly in rank, wanted his own ship and hoped to get Katherine to change her mind. Seven years later, he got his 4th stripe, as captain of the Seaward. After a few more lonely years at sea, faced with an unrelenting Katherine Patch, Svein asked for a transfer to NCL’s Oslo office. “I appreciated Svein’s efforts to get an office job, but was not willing to move to Oslo,” Katherine said. Crestfallen, Svein had to face the probability of leaving NCL and getting a job in the U.S., preferably Miami. NCL had no openings there. Finally, in 1994, Sleipnes was hired by Royal Caribbean (RC) as Port Captain in Miami. He and Katherine were married in September 1994, and moved to Weston, a Miami suburb. A promotion to Director of Port Operations followed. This entailed the management of all the RC’s main ports.

At RC, Sleipnes would be called at all hours of the day or night to handle real or perceived emergencies, the most memorable of which was the beaching and evacuation of the 880-foot Monarch of the Seas. In December 1998, Sleipnes was called by the Monarch’s captain, who informed him that the ship had run over a reef near St. Maarten and was taking on water. Calls to the ship’s engineer reflected that there was a 131-foot gash in the starboard hull and that three water-tight compartments were completely flooded, with several others filling up. Although it would cause further damage, Sleipnes ordered immediate grounding on a nearby sand bar to prevent further sinking. All passengers were safely evacuated

The Monarch of the Seas.

and the ship was later towed to Mobile, AL and repaired. It is still in service today.
In May, 2000, NCL was bought by Star Cruises, with headquarters in Miami. They approached Sleipnes about bringing him back as Vice President – Nautical Operations. Svein accepted and was soon embroiled in a potential tragedy. Sleipnes was called at night by the captain of an NCL ship on the Miami St. Maarten run. A crew member, a Romanian woman, was reported missing. Her keys and shoes had been found on the aft crew deck. “There was no doubt in my mind that for whatever reason, she had gone overboard, and that everything must be subordinated to trying to find her,” said Svein. “I ordered the ship turned around and notified the Coast Guard of the circumstances and ship’s position.” Sleipnes then laid out a crisscrossing search pattern as the ship retraced its path. At 7:30 the next morning, the captain requested permission to break off the search and proceed to St. Maarten. The coast guard was on the scene. Svein denied this request and ordered the search to continue. A few hours later, the ship reported finding the crew member, putting out a boat, and rescuing her. Sleipnes later learned that when the crew member was hired, she did not know how to swim. Sleipnes had initiated a policy whereby employees and new hires must take and pass swimming lessons. “This crew member had taken these lessons and was able to keep herself afloat until rescued. It was my most gratifying moment as an executive,” said Svein.
One of the most disappointing and gut wrenching incidents happened to his beloved

liner Norway. On May 25, 2003, while disembarking passengers at her Miami terminal, this beautiful ship suffered a boiler explosion, killing eight crewmen and injuring more. The forty-year-old 1,035 foot liner was then the last remaining ocean liner originally built for trans-Atlantic service. “I was in that boiler room three days before the explosion,” said Sleipnes, “the first thing that popped into my mind was the possibility of a terrorist attack.” This had to be confirmed or discounted with dispatch. After talking to the captain and engineers, Sleipnes was able to confirm a boiler explosion. The Norway was ultimately towed to India and scrapped. Sleipnes and many others still mourn her passing. “There will never be another like her,” said Svein.
In 2011, Sleipnes was promoted to Sr. Vice President in charge of Marine Operations, Nautical Operations, Safety and Environment. He reported directly to the president and CEO. His busiest months were in the hurricane season when he often had to reroute ships around the storms. Sleipnes was also tasked with managing an entire outlying island in the Bahamas, used by NCL as one of its cruise destinations.
About six months ago Svein left NCL for the last time. He has been doing consulting work and spending more time with his family. Katherine runs a Miami business involved in moving merchandise into countries as duty-free. Captain Sleipnes now commands only an 18-foot fishing skiff, with a two man crew named Hans and Christian.