Sea Turtle Species in Our Area 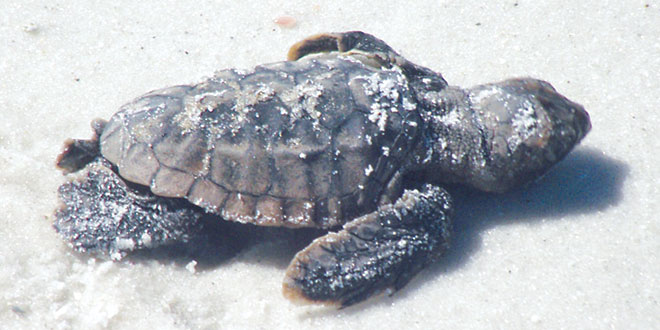 This lone Loggerhead hatchling is just moments old, about 2 inches long, and full of steam to get to the water. PHOTO BY BOB MCCONVILLE

It’s August and we’re right in the thick of things. They are coming and going, mostly by night, on Florida’s beaches, and rarely does the public get to see them. They disturb the sand and we can’t walk in that spot for two months.

Many people look for them, but mostly in vain. Do they really exist? They must! We see evidence of their presence, but rarely do we see “them.”

Numerous volunteers scour the Collier County shorelines every morning for tracks and then mark where “they” have been. What are these creatures? Why are they here?

Not to worry….it’s only our annual influx of sea turtles.

Females are busy laying their eggs, about 100 on average, in their nests. Record numbers of nests have been reported this year and the calm tropic conditions could produce a record number of young survivors. This is great news for these species.

Most people are aware that Loggerheads and Green Sea Turtles lay their eggs on our area beaches, but did you know that 5 different sea turtle species are in this area?

Loggerheads are the most common, and among the larger, to grace our beaches. Having a shell length of 3 feet they can weigh on average about 275 pounds. When newly hatched, the young are only about 2 inches long. Adult females can produce several nests in a single season and most only lay eggs every 2 to 3 years. Because their jaws are so powerful, clams, crabs, conch and other shelled creatures are easily crushed.

Green Turtles also nest on our beaches. While the loggerhead

is more bulky, this species is more like the racecar of turtles, nut they can weigh up to 350 pounds.

The adults are vegetarians, eating mostly algae and seagrass. An interesting fact was discovered about them in the mid 1800’s. By turning them on their backs, merchants learned that they could ship them and keep them alive all the way to England. By 1878, 15,000 Green Turtles were being sent annually from Florida and Caribbean waters.

Kemp’s Ridley Turtles also pass through our area. They are also the rarest sea turtle in the world. Its major nesting beach is Rancho Nuevo on Mexico’s Gulf Coast. Weighing in at 100 pounds they are small but very tenacious. Like the Loggerhead, they will eat crabs and other crustaceans. In the 1980’s some eggs were relocated from Rancho Nuevo beach and artificially incubated, hoping to “jumpstart” additional birthing areas. Incubation temperature will determine the sex of a turtle, and this process failed since most hatchlings were males. Additional experiments did not fare well either.

Hawksbill Turtles are, to me, the most beautiful. In my most recent dive in the Florida Keys, the black and brown markings on the amber-like background really glistened in the tropical sunlight. It was a fantastic sight! Weight for this species is 100 to 200 pounds and the shell length is about 2 ½ feet. Their jaws are ideal to collect their primary food source, sponges. The shape of these jaws give this creature its name.

A Loggerhead Sea Turtle nest is excavated by interns to assure that all hatchlings have a chance to survive.

last for a special reason. They look quite different from the other area species. Instead of a shield-like shell the Leatherback are covered with a firm, leathery skin with ridges running down the back. Their favorite food is jellyfish. Their throat cavity and scissor-like jaws are lined with spines that help in swallowing prey.

An average 6 feet in length, they can weigh up to 1,500 pounds. They dive deeper, travel further and tolerate colder water better than any other sea turtle.

So why did I wait to mention the Leatherback until last?

In January of 2010 a Leatherback was seen on Delnor-Wiggins beach. In May of 2013 FWC assisted in the rescue of an entangled Leatherback just 3 miles from Caxambas Pass. This species nests primarily on Florida’s east coast.

I say this because, just a few weeks ago, volunteers were excavating a hatched turtle nest in our area to assure that all of the young made it out okay. When some young were retrieved and examined, sure enough they were identified as baby Leatherbacks! A first for our beach area!

Is this another one of Mother Nature’s stepping stones? One of my favorite sayings is “If there is one thing that’s constant in life, things change.” Surely two sightings of Leatherbacks and a nest in our area are signs of change.

I look forward to the next unique joy that will come our way!

Bob is the owner of Stepping Stone Ecotours and a Naturalist for a local dolphin survey team. He is a member of the Florida Society for Ethical Ecotourism. Bob loves his wife very much!