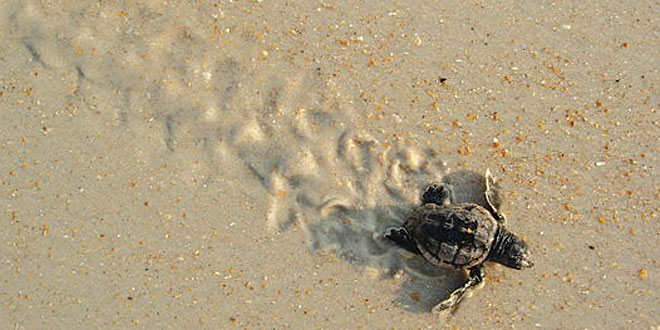 Submitted by Department of Environmental Protection

“Researchers, staff and volunteers at Florida’s three NERR’s play an important role in protecting sea turtles and helping to ensure hatchlings have the best chance for survival,” said Kevin Claridge, director of DEP’s Coastal and Aquatic Management Areas. “Florida’s NERRs are essential for the preservation of the state’s unique coastal landscape and the species that live there.”

Early each morning during the season, staff, volunteers and interns with Rookery Bay National Estuarine Research Reserve in Naples patrol miles of sand along five beaches that account for nearly half of all the turtle activity in Collier County. This year’s nesting activity is higher than last year. There are 461 documented nests in 2013 compared to 427 in 2012.

Researches at Guana Tolomato Mantanzas National Estuarine Research Reserve are reporting fewer nest compared to last year: 174 to 183. However, among these are 14 Atlantic Green Turtle nests. Green sea turtles are highly endangered and an increase in nesting is a welcome sign for its population’s health.

At the Apalachicola National Estuarine Research Reserve, 226 nests have been caged by the patrols on 12 miles of beaches and two additional nearby islands. While nests can be inundated by high tides and coastal storms, the most serious threat is eggs being dug up and consumed or otherwise obliterated by predators, so the cages provide a needed defense.

Young turtles have a small amount of energy that must take them to the water, which under natural conditions is the brightest spot on the nighttime beach. If they disorient – and head the wrong way – they may starve to death before landing in the floating sargassum weeds which are their food source.

• Take all personal belongings from the beach at the end of the day so no obstacles exist on the way to the water.

• Pick up and properly dispose of litter on the beach.

• Stay off the dunes and use the designated walkovers for crossing.

• Shield any artificial lighting that might shine towards the beach.