Saving One Brown Pelican at a Time 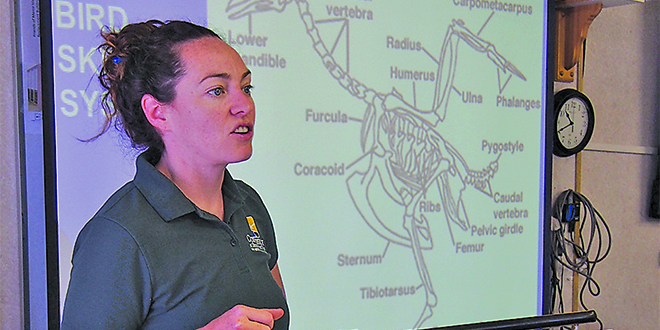 Brown Pelicans are always looking for an easy meal and often times they’ll swoop in on a catch just as an angler is reeling it in. According to Jonee Miller, a wildlife rehabilitation specialist at the von Arx Wildlife Hospital, “Pelicans are very adaptable birds and for this reason, they get themselves into big trouble as they associate humans as their source of food.”

Jonee Miller, along with volunteer staff from the von Arx Wildlife Hospital of the Conservancy of Southwest Florida, held a training seminar at the Caxambas Coast Guard Station on March 28th on what to do if you hook a pelican.

A common encounter of the deadly kind is fishing line entanglement, which can be fatal for a pelican. When it goes back to the mangroves or its nest to roost for the night, the fishing line gets entangled. The more the pelican struggles to get free, the more it gets tangled and eventually, it will dangle and starve to death. This is a slow painful process of starvation for the helpless pelican. 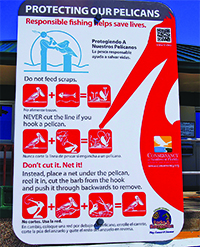 Oftentimes you’ll hear an angler say, “the hook will rust out and the stomach acid will take care of it.” All shorebirds admitted to the Von Arx Wildlife Hospital get an x-ray to check for ingested items. Once they admitted a pelican with seven hooks inside its stomach. The hooks don’t rust out and the stomach acid will not take care of it – hooks can cause extensive internal damage.

Another very common sight is a well-meaning angler cleaning his catch at the end of the day while pelicans congregate waiting for freebies. This is a behavior they’ve learned from humans. Cuttings contain lots of bones which pelicans cannot swallow. The fish they catch off shore are usually three-five inches long. Just because they have a large pouch does not mean they can swallow large cut-up fish.

According to Jonee Miller, “Diving behavior is a learned behavior.” Juveniles have to watch successful adults dive for fish. By humans feeding them fish, we are preventing them from learning how to dive for fish. We are harming pelicans with kindness when we feed them.