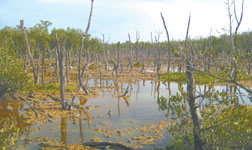 Phase I dead zone, pictured here, is located near Steven’s Landing on the north side of SR-92. PHOTOS BY NATALIE STROM/COASTAL BREEZE NEWS

What is it that holds Marco Island together? It took years of dredging and filling, building roads, constructing bridges and paying countless dollars in taxes to build such a beautiful island. Yet, all of this construction is not the glue that holds Marco together. As a barrier island, Marco, Goodland and the surrounding areas are truly held together by our mangroves; and they are dying.

Driving along State Road 92 from Marco Island to the Goodland Bridge, it is clear that the mangroves on either side of the road are in trouble. The area, known as Fruit Farm Creek, clearly displays bare branches, dead trees, stagnant water and the stench of decay. But why is this happening?

According to Robin Lewis III, a Certified Senior Ecologist of the Ecological Society of America, a Board Certified Environmental Professional, Professional Wetland Scientist and President of Coastal Resources Group, Inc., there are a number of factors contributing to the mangrove die-off. “Blocked or restricted tidal exchange such as what we see along SR-92 (causes mangrove deaths) due to flooding and water logging. There is one existing 54 inch culvert under SR-92 that connects one side of the road to the other and allows for tidal exchange. As far as we know, it was installed when the road was built; about 1938. Thus it is now 74 years old.

The normal lifespan for these kinds of culverts in saltwater is 50 years.”

The flow of tidal waters is necessary for the survival of these mangroves. The road has disrupted the flow of the area’s natural tides, causing parts of the mangroves on both sides of the road to flood and die. Roots of the black mangrove, called pneumatophores, shoot up out of the ground to gather oxygen. When they are constantly covered in water, they don’t receive that oxygen and they die. But why do we care?

Aside from coastal protection, Florida’s commercial and recreational fishermen 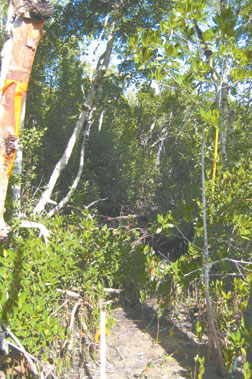 Once an historic tidal flow this creek has now dried up.

depend upon mangroves as they act as fisheries, or nurseries, for species such as snook, redfish, spotted sea trout, goliath grouper, mangrove snapper, pink shrimp and blue crabs. In fact, it is estimated that 70 to 90 percent of all commercially and recreationally important fish and shellfish spend some portion of their life cycle in the mangroves. In turn, the sea life within these mangroves provides food for wildlife such as the endangered Roseate spoonbill as well as herons, egrets and other bird life. “Bottom line: no mangroves equals no fish or wildlife in South Florida’s coastal zone,” Lewis adds.

And that smell! The tides that rush through mangrove systems act as a natural sewage treatment facility. According to Lewis, “they remove excess runoff, pollutants such as nutrients and excess sediments from land development and insure clean water to bathe seagrass meadows and coral reefs that need low-nutrient, clear water to survive.” With proper tidal flow along SR-92, the smell of decay would vanish.

Efforts have been made by a number of agencies and concerned individuals to fix this 250-acre area of stressed and dying mangroves. A number of concerned citizens, along with Coastal Resources Group Inc., Rookery Bay National Estuarine Research Reserve and The Conservancy of Southwest Florida have spent numerous years studying and understanding what needs to be done in order to fix this problem. The answer they have come up with is surprisingly simple.

Working with Rookery Bay, U.S. Fish and Wildlife and The Conservancy of Southwest Florida, Lewis has developed a two-phase plan, that has already proven successful in other areas, even as close as North Naples. Phase I, due to begin February 22, will consist of reestablishing the historic tidal channel that exists near Steven’s Landing on the north side of SR-92. By clearing those channels, proper water flow will be restored. In turn, the dead mangroves will replenish themselves.

Phase II, however, will take a bit more work. As Lewis explains, “our plan is to keep the original culvert, if it can be salvaged, and install three additional 48 inch culverts completely across the road; one next to the existing culvert and two to the west to restore the historical flow regime. This will be accompanied by clearing of historical channels on the south side of the road as well.”

of the most interesting aspects of this project centers around the regrowth of those mangroves. Past mangrove restoration efforts have focused on replanting trees in dying areas. Yet, research by Lewis and others has shown that proper tidal flow will allow the trees to replenish themselves on their own. This means that little else is needed to restore the 255 acre die-off area once the full project is finished.

Thanks to a research grant of $75,000 by U.S. Fish and Wildlife, Phase I of the project will begin with a groundbreaking ceremony at 10:30 AM on February 22nd. All are encouraged to attend the half-hour event to learn more about the issue.

As local resident-activist, Bob Olson, explains, “The one common thread here is that we all love Marco Island. We need to preserve the foundation that holds our island together.”

Consider the prices of individual lots purchased on Marco Island in the last year alone. Published sales show that empty lots ranged in purchase price from around $40,000 up to $600,000, with one lot sold for $1.5 million. These prices prove that, even in a somewhat uncertain economy, the common thread of love for Marco Island still exists. They also prove that the money is there to raise the necessary $150,000. “Whether you give $1 or $100, every bit makes a difference. This is a call to action,” adds Olson.

For those who would like to keep Marco Island and Goodland from washing away, donations toward the $150,000 goal can be sent to Coastal Resources Group, Inc. (CRG), at P.O. Box 30, Marco Island, FL 34146.

To learn more about the restoration efforts at Fruit Farm Creek, visit marcoman groves.com. For more information about a similar project with positive results, known as Clam Bay Pass in North Naples, visit www.conservancy.org. Kathy Worley, of the Conservancy of Southwest Florida, has produced a number of studies examining the mangrove die-off at both Clam Bay Pass and Fruit Farm Creek. Her studies may be found under the News & Publications section.