Save Room for Tortoises 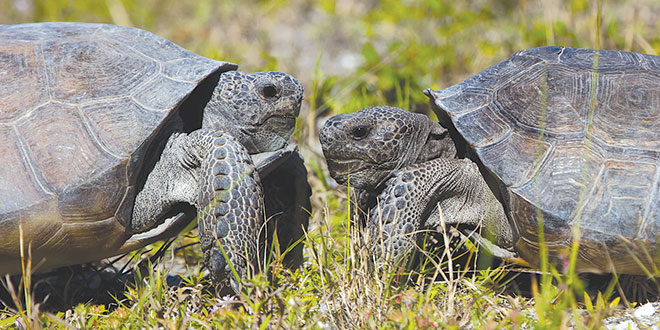 Surmised from many inquiries, interactions with residents, increased numbers of volunteers, large membership in wildlife groups, roadside stops by too-many-to-count photographers at burrowing owl areas around the island, and the overwhelming attendance at wildlife presentations and in contests over the past few years, interest and awareness in the local wildlife has greatly increased. Though, unfortunately, this interest and awareness has only equated to positive action to protect and provide habitat for wildlife with only a handful of people.

Due to habitat loss from development, a species rapidly declining throughout the state of Florida is the gopher tortoise (Gopherus polyphemus). This upland, indigenous tortoise is listed by the state as a “threatened” species, which provides stringent regulations to protect it, its burrows and habitat. It is considered a “key stone” species in Florida, as its burrow provides shelter to close to 360 other species, making it the “backbone” of Florida’s, fragile and rare, upland ecosystem.

Here, on Marco Island, the gopher tortoise currently has a robust population. Found mostly in the “estates” area of the island, which provides hilly, well-drained soils, upland scrub oak and palmetto habitat and space to roam — all which they require for burrowing, eating, hatching their young and sunning — the Marco Island gopher tortoises are in need of protection and conservation. They also are found in smaller numbers in areas along and around Granada, Sheffield and Spinnaker Drives and in Stevens Landing, Key Marco and Hideaway Beach developments. The population has been studied a couple times in recent history, originally by Florida Gulf Coast University masters program student Julie Ross, who is continuing research of the genetics of this island population to conclude if this could be a subspecies due to its isolation on the island.

Then, last year, during the final phase of the city’s septic system replacement project, all tortoises were trapped and removed from the project area of the right-of-way, relocated temporarily on the upland properties. More than 100 tortoises were documented, weighed, measured and sampled for genetic analysis too.

In general, the suburban Marco Island tortoises — though living in higher densities, more burrows and tortoises per acre than what naturally has been studied in wildlife preserves and sanctuaries — were found to be very healthy with a variety of ages/sizes which indicates 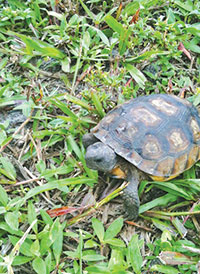 a sustainable population. Though, it is understood that this state of harmony is delicate.

Just in the past month, five, very large, very old, tortoise have been hit and killed along the roads of these neighborhoods. Daily, offers are made on the undeveloped properties that have five to ten to more than a dozen burrows. Soon these properties will be developed, leaving no room for the tortoises. State regulations require a permit to trap the tortoises and remove the burrows on any property prior to any development. There are varying mitigation fees required, and a biologist/environmental consultant that has been state licensed as a “gopher tortoise agent” is required at all times in this process. Tortoises can be kept on the property if space is preserved; if not, they are trapped and removed to an approved receiving site that is approximately 100 miles away. Though this removal saves tortoises from being buried alive, they are removed from Marco Island’s unique ecosystem and disrupt the current sustainability of the island tortoise population.

This island population, though healthy now, will decline in the next few years, as development continues and no proactive conservation is considered and acted upon. Habitat needed for burrowing and feeding will disappear; more cars on the roadways will increase rates of mortality due to vehicle hits; and less people choosing to keep them on their property to cohabitate peacefully and instead removing them from the island will all contribute collectively to the decline and unfortunately an unsustainable population.

Wouldn’t you hate to see the day that someone says, “Remember when there were gopher tortoises on Marco Island?” It doesn’t have to happen. As the island moves forward to complete development, single-family, multi-family, commercial and public properties all should be considered as possible niches for habitat creation for the tortoises. Setback and areas that are open on properties can be spaces for this burrowing, peaceful animal. Landscape, using native, low growing plants — broad leaf grasses, coco plum, succulents and cactus — can be incorporated in yards and parks. Landscapes can be maintained right up to the burrow area. The balance of wildlife and landscape in a yard is what makes this island unique and thrive. Consider the enjoyment of having a tortoise in your yard.

Save room on the island for gopher tortoises. The largest tortoises, measuring in lengths of 10-16 inches, are aged to be 60 years old. Artifacts found on the island connect the tortoise to the Calusa Indians and pioneers. These enchanting tortoises carry a history of this island and bring good will and karma for past and present residents.

For more information on gopher tortoises, please contact Nancy J. Richie, environmental specialist for the city of Marco Island, at 239-389-5003 or nrichie@cityofmarcoisland.com. Also, go to www.myfwc.com and search “gopher tortoise.”