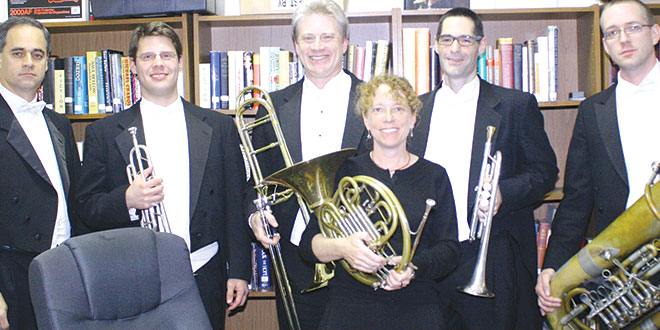 The Jewish Congregation of Marco Island has announced the second and third events of the Saul I. Stern Cultural Series for 2014. On Saturday, Feb. 22nd, at 7:30 PM, the Naples Philharmonic Brass Quintet will perform for the eighth year, and on Sunday, March 2, at 7:30 PM, Rabbi Marvin Tokayer, the retired Rabbi of Japan will discuss Jewish History in Asia.

Both events will be held at the Jewish Congregation of Marco Island, 991 Winterberry Drive.

On Saturday, the Naples Philharmonic Brass Quintet will perform Rimsky-Korsakov, Bizet, Dvorak, Rossini and Copland. The players include Matthew Sonneborn, trumpet; David Dash, trumpet; Tracy Leonard, horn; Michael Zion, horn; and Aaron McCallla, tuba. Two additional musicians will join the group — John Evans percussion and Laurie Lyons both on percussion. Following the performance, guests will be offered a Viennese table complete with a presentation of fine baking and a tasting of Starbucks.

Rabbi Tokayer has written more than 20 books. The first he wrote in Japanese “Wisdom of the Talmud,” sold more than 1 million copies, and has since been translated into Korean and Chinese. He has written on Jewish wisdom, humor and similarities between the Jews and Japanese. He has spoken all over the world.

Following his study at the Jewish Theological Seminary of America and his ordination, Rabbi Tokayer enlisted in the United States Air Force as a chaplain. He was sent to Japan with his wife, an Israeli. He agreed to go for two years, but it was more than a decade that he served as Rabbi of Japan and Director of Culture, Religion and Education for the Jewish Communities of the Far East, requiring him to serve the needs of communities that included India, Thailand, Hong Kong, Singapore and Korea.

When he arrived in Japan the Jewish community numbered 1,000, most of whom had their roots in the ravages of WW II. The Congregation was made of Jews from Siberia, Russia, Iraq and Europe, who arrived on routes that took them first through China. Rabbi Tokayer traced Jewish roots as far back as the establishment of the Trans-Siberian railway and even to early days of Jewish merchants who moved in an out of China.

He came into possession of 8,000 classified Japanese documents, created between 1934-1940, outlying a plan to create a haven for Jews and defy their Axis partners — the Nazi — who wanted the Japanese to exterminate all Jews.

For more information on these Saul I. Stern Cultural Series events and other upcoming events, call the Synagogue office at 239-642-0800.