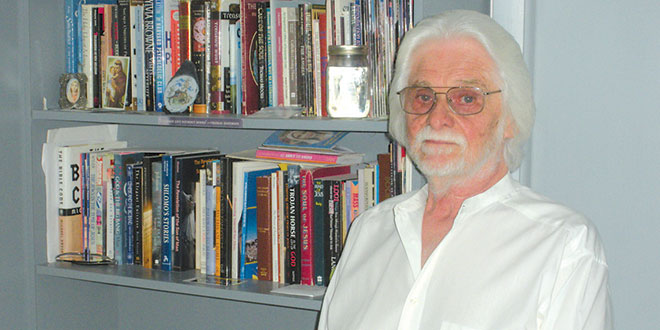 Saran has had a very interesting life, the sort for which the term “renaissance man” was invented.

The Marco resident has a psychology degree from the University of Miami. Aside from being a talented painter, Saran has worked as an orchestral songwriter and record producer, enjoyed international success as a fashion designer and a carved-glass artist, and established a memorial design company whose works can be seen locally. Along the way, he’s formed friendships with such luminaries as Judd Hirsch, of “Taxi” fame, the “Chairman of the Board,” Frank Sinatra and astronaut Charlie Duke, who was the pilot for Apollo 16 and walked on the moon in 1972.

For the last 45 years, Saran – he prefers to be known by his last name, professionally – has also been a dedicated practitioner of the ancient Eastern disciplines of meditation and yoga, once little known throughout the West, that today are popular means of attaining spiritual and physical growth.

In fact, Saran, 74, has invented a new form of yoga that is designed to foster balance in one’s life so that we are in harmony spiritually, as well as with our fellow man, the environment and the increasingly unsettled world we live in.

Saran has named this new form of yoga Baraabar, the Hindi word for balance. He has laid out his yogic philosophy in a recently completed 250-page book that he is preparing for publication. It is entitled “Baraabar Yoga, The New Yoga of Balance,” with the subtitle “The New Yoga for the New Millennium.”

Yoga has been practiced in India for thousands of years and several principal forms have arisen over time: Karma, Jnana, Bhakti and Raja, each of them distinguished by their unique focus.

Like them, Baraabar includes the exercises and the meditations that are commonly associated with yoga. But Baraabar stands apart from those other forms in one important way.

“It’s the first yoga where you can only practice it if you interact with someone,” said Saran. “It’s not sitting in a corner and meditating. It’s living in the real world, with real people and finding that balance with real people, while directly interacting with them. We don’t do that enough anymore because we’re digitally overloaded by electronic gadgets”

Baraabar’s interactive or spiritual component can enable participants to bounce ideas off of each other, provide feedback and in doing so, inject the practice with a vitality that keeps it from getting stale, he states in the book.

Writing has long been an avocation for Saran, who hit upon the idea for penning a book about what he calls “my philosophy of life” four years ago, when he was looking for a new pursuit to throw himself into after turning 70.

“I sat here and said, ‘What am I going to do next?’” he said. “I said, ‘Well, I’ve never written about all the stuff I know about yoga.’ So I started writing about my Baraabar Yoga. I remember my parents got along really well because they found a way to have a balance in their married life. So I always carried that with me, how to have balance in your life and I’ve always tried to have balance in my life and to have balance with other people that I live and work with.”

“Baraabar Yoga is all about how to approach another person, find out where they’re coming from and then try to balance that with where you’re coming from so you can find that equilibrium,” he said. “There’s always some little place where you can interact with anybody, it doesn’t matter who they are. You can take that little place, and expand it and find that balance. I do that with people all the time. I get along with everybody. I don’t care who they are. Everybody has that little place, where you can take that thing and expand it.”

He was living in New York City when he first encountered Charlton, who was simply known as Hilda and had just moved there after studying spirituality in India with several gurus for about 20 years. Saran was her first student.

Ram Dass also returned to the U.S. in 1970 after years of spiritual study in India. He settled in California, where he taught for about one year before moving to New York.

“They didn’t know each other until Ram Dass eventually came to New York City and met Hilda,” said Saran. “And then the whole thing started, and there were hundreds and sometimes thousands at her meditations. I learned a lot from both of them.”

Saran believes that Baraabar isn’t so much his creation as much as he is serving as a spiritual vessel, bringing forth this philosophy at a time when it is needed.

“I feel that it’s come through me because of my name and because I’ve practiced yoga for 45 years and because, at least for this branch of the family, I’m the last Saran. So maybe it came through me and maybe the world wasn’t ready for this interaction until now.”

The surname Saran is derived from the Sanskrit word for shelter or sanctuary, Sarana. The word’s Hindu meaning is “He who sits at the feet of God” or “He who sits in the shelter of God.”

Saran said his family originally inhabited a section of northern India, in the Himalayan foothills, where they ruled over the Kingdom of Saran, now known as the District of Saran. He said they left in the early 1800s, when the British took over India and threw out some maharajas. The family migrated north into Europe, and eventually settled in Poland. Saran said his father immigrated to America as a child, in the early 1900s, eventually settling in Toronto, before moving his wife and children to Miami Beach.

A practicing Catholic, Saran does not see yoga and Baraabar and Christianity as being mutually exclusive, and as evidence of their commonality, he cites a passage from the Old Testament, Proverbs 11:1, in which God says, “A false balance is an abomination to the Lord, but a perfect balance is His delight.” As he sees it, “It’s all about balance.”

Saran said his introduction of Baraabar has nothing at all to do with personal gain.

“I’ve had my picture in newspapers and magazine articles about all the other things that I’ve done in my life,” he said. “I just want to get Baraabar Yoga out to people to help them and that’s the only reason. To make their life balanced the way my life is balanced. Once you have a balanced life, life becomes easy. It really does. The more people that can interact and find a balance with another person, it’s going to multiply. That’s my hope.”

For more information about Baraabar Yoga, visit or email Saran at baraabaryoga@gmail.com.