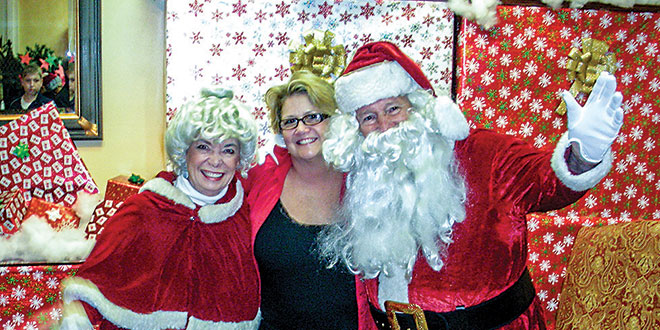 Debbie Schroeder of Marco greets Mr. and Mrs. Claus at their home base on the island, Salon and Spa Botanica in the Shops of Marco.

Celina Alber has a well thought out opinion about what she enjoys about what’s become an annual event for her family – “Santa’s Arrival” at the Shops of Marco.

“They always give out candy canes and that’s one of my favorite parts,” said the 9 year old Marcoite on the day after Thanksgiving, “And also everybody dresses up as reindeer and elves, and there’s Santa Claus.”

“Santa’s Arrival” is part of the annual Christmas Island Style celebration and the event drew throngs of revelers to the shopping center’s parking lot where many lined up to visit with Santa and Mrs. Claus. The Yuletide couple arrived via Marco Island Fire-Rescue truck, 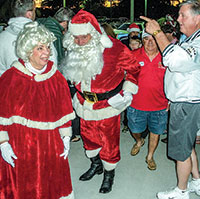 Mr. and Mrs. Claus delight the crowd upon arriving at the Shops of Marco. PHOTOS BY DON MANLEY

setting up shop in Salon and Spa Botanica.

Celina was there with her mother Clara and her sister Alessandra, 6.

The event has become a regular part of the family’s holiday season, said Clara Alber.

Salon and Spa Botanica was one of several of Shops of Marco businesses that extended their hours of operation for the event, including Golden Gate Jewelers 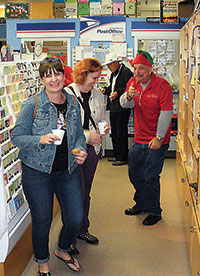 Mike Held, shares a laugh with Lori St. George, left, and Kitty Charde, in the store he co-owns Keep In Touch Cards, Gifts and More.

of Marco Island and Keep in Touch, Cards, Gifts & More.

There also a number of information tables set up along the sidewalk by other shops at the plaza, along with what has become a featured charity for the Shops of Marco merchants for “Santa’s Arrival,” Marco Island-based Joy of Giving.

The nonprofit spends donations exclusively for the purchase of Christmas gifts for Collier County’s underprivileged children. More than 1,000 youths will receive gifts this year through the program, said Mike Held, co-owner of Keep In Touch.

Held was pleased with the public response to “Santa’s Arrival” 2014.

“We are very appreciative of the community that supported us by coming this year,” he said. “It’s been a fine turnout.”