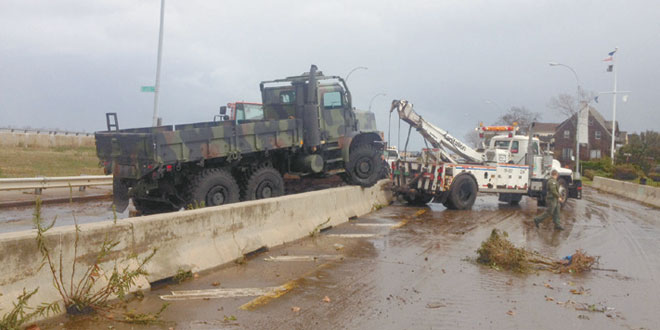 Working actors don’t get free designer gowns. They hear ‘no’ more often than they land a part. They don’t have layers of hired handlers, to steer them away from the unscripted side of their personalities. One of these actors, Sean Ringgold isn’t just climbing the fame ladder. He is putting his all into making a difference in his old neighborhood. He came to Marco to take part in Soapfest, where he vividly described the harsh reality of what poor neighborhoods experience when a natural disaster like Hurricane Sandy hits. The negative impacts that unfold for months, and even years, create needs that don’t end after the swipe of a card automatically donates a dollar to the Red Cross, an agency itself that often 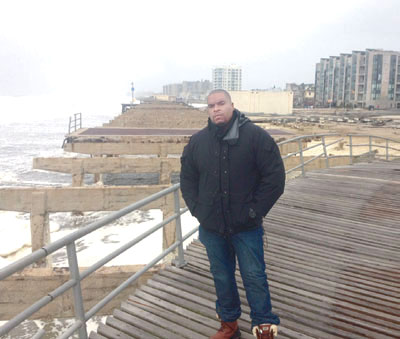 Ringgold stands on what was left of the boardwalk.

comes under fire for being too large and slow to respond effectively.

Islander Paul Cantwell drove a truck to the Jersey Shore last week, packed with items donated by the Marco community, to be handed directly to those in need. On December 1, the Under the Boardwalk Penny Drop will be collecting loose change for the same purpose. So if you think Sandy should have disappeared from the news cycle by now because you are tired of reading about it, please reconsider and think about how tired very many people are of dealing with loss and homelessness in a Northeastern winter.

In the Rockaway neighborhood of New York, you won’t find many residents who have a warmer, safer place to flee. Where they are is where they’ll 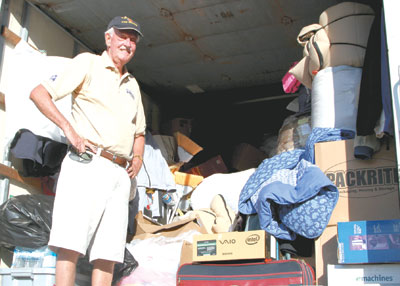 stay, and where they stay is “freezing, but they’re afraid to open their doors [to help]; they’re losing weight.” Ringgold is indignant of the media coverage that failed to portray the reality of what neighborhoods like Rockaway experienced in the aftermath of Sandy. “These are hardworking families who are struggling. They are out of work [because of Sandy] but they are being charged to get on the bus to go reach supplies.”

Ringgold took in his mother and sister, who were displaced. “The ocean met the bay and totally leveled a lot of homes.” He rolled up his sleeves and leveraged all the contacts he could to get basic supplies, “the things we all take for granted,” directly to people who needed them. Soapfest contributed part 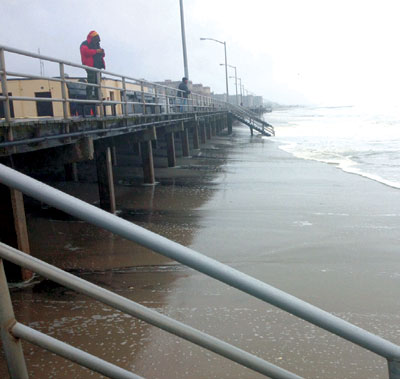 The boardwalk in Ringgold’s neighborhood before the storm hit.

of its proceeds to his efforts.

Many on the Marco Island Fire Department have ties to New Jersey. In the aftermath, as they learned of the devastation from family members and their counterparts in New Jersey, a local relief effort was born. The Marco Island Chamber of Commerce, Fire Rescue Foundation, Kiwanis Club, Sunrise and Noontime Rotary Clubs, Marriott, San Marco Catholic Church and the Police Foundation have pooled their fundraising efforts. 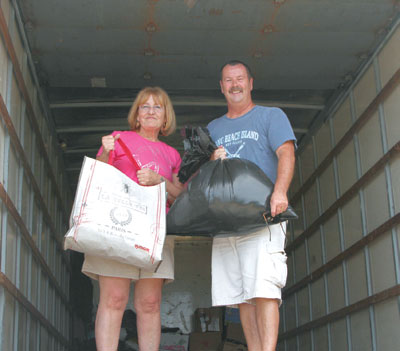 them don’t have a home.”

The idea behind the relief effort is similar to Ringgold’s: get supplies and aid money directly to people who most need it, and provide help to the helpers themselves.

The truck filled with donations reached Fairview, NJ over Thanksgiving weekend. The items were dropped at an on-going relief center.

Dohm adds, “It’s unimaginable that a Category 1 hurricane could have caused so much devastation. We prepare, but I don’t think they were ready. We cannot thank the people of Marco Island enough.”

The Under the Boardwalk Penny drop will take place on December 1 from 10 am to 6 pm at the Marco Island Fire Station. Drive through and drop your spare change. The money raised will go back to the New Jersey fire departments to support their on-going relief efforts.