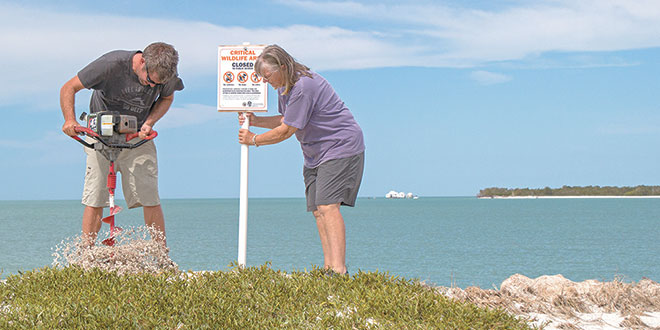 Florida Department of Environmental Protection’s Rookery Bay National Estuarine Research Reserve (RBNERR), in cooperation with the Florida Fish and Wildlife Conservation Commission (FWC) and Audubon Florida, has closed the emergent sandbar located one mile southeast of Cape Romano, known as “Second Chance.” The sandbar, which is closed to public access annually from March 1 – August 31, was designated as a Critical Wildlife Area (CWA) by the FWC in November.

“Protecting Florida’s wildlife and natural resources is our first priority,” said Rookery Bay Reserve Director Keith Laakkonen. “Taking steps to protect this habitat during the nesting season will increase the likelihood of successful breeding and help preserve threatened Florida species such as the least tern.”

The area has been closed annually since 2001 to protect nesting habitat for least terns, black skimmers and Wilson’s plover. This is the first year that the 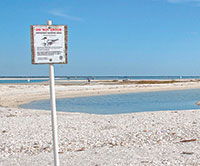 Signs warn boaters to stay off the sandbar until nesting season ends.

CWA rules are in place prohibiting vessels, in addition to people and dogs, from visiting the sandbar during summer nesting season. Rookery Bay offers numerous other recreational options throughout its 110,000 acres of coastal lands and waters.

“We work with our partners to establish CWAs to protect wildlife from human disturbance during important life stages such as nesting,” said Kipp Frohlich, deputy director of FWC’s Division of Habitat and Species Conservation. “We had broad public support and the Commission was unanimous in their decision to create this CWA, the second one established by the Commission in the last two years.”

“Audubon cheers the efforts of the Department of Environmental Protection and Fish and Wildlife Conservation Commission to manage the important shorebird nesting site at Second Chance Shoal,” said Eric Draper, executive director of Audubon Florida. “This kind of agency coordination and action

RBNERR and FWC have installed perimeter signs on the island to clearly mark the sandbar as closed. The signs will be removed on August 31 after the birds have left and boating visitors may return.

The least tern is listed as a threatened species in Florida by the FWC and black skimmers are listed as a Species of Special Concern. Nesting areas will be monitored throughout the nesting season and harassment or removal of endangered or threatened birds, their eggs or young is a violation of state law and may subject violators to criminal penalties. Additionally, the attempt to remove or possess any migratory bird, their nest or eggs is a violation of federal law.

Renee Wilson is Communications Coordinator at Rookery Bay National Estuarine Research Reserve. She has been a Florida resident since 1986 has joined the staff at the reserve in 2000.