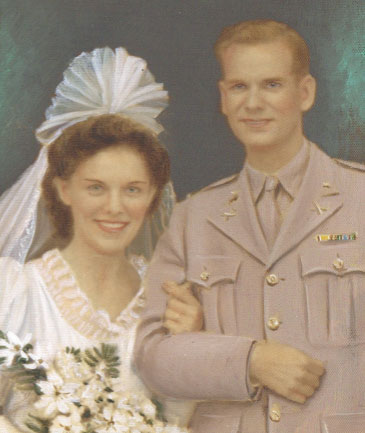 A TRIUMPH OF LOVE IN THE MIDDLE OF WAR

Coastal Breeze News salutes a couple as part of its continuing recognition of World War II veterans. Two young lieutenants met while serving in the United States Army and neither war nor far away assignments could keep them from finding each other again and again.

Georgia Ivanoff Olsen resides on Marco Island in the same condo she shared with her husband, Edward, until his death here in 2005. Their northern homes were in Chicago and Fontana on Lake Geneva, Wisconsin where they raised their only child, Lucienne.

In 1943, Georgia, a recent nursing school graduate, was working in comfortable conditions in the United States but knew about the urgent need for nurses in the armed services. She wrote to the Red Cross describing her interest in enlisting and one week 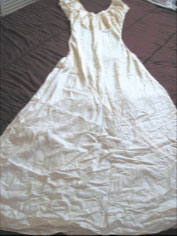 From parachute to wedding gown.

later received a reply. Georgia still has the correspondence.

She chose the army, quit her job and boarded a train for Camp Ellis, Illinois. Her mother and father were the parents of daughters and as the oldest, Georgia considered it her duty to serve her country in the name of her family. Following her training, she was assigned to temporary duty with the 43rd Field Hospital and transferred to Camp Stoneman, California to await orders.

Lt. Edward Olsen served at several army bases in the United States before he was ordered to Camp Stoneman for shipment overseas as a replacement infantry officer. Just before shipping out, he met another lieutenant, Army Nurse Lt. Georgia Ivanoff, at a dance in the Officers Club at Camp Stoneman. The young couple promised to write one another. 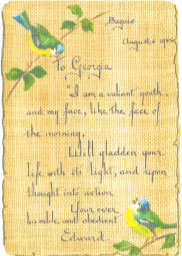 Hawaii to join the 33rd Infantry Division as a rifle platoon leader. On February 15, 1944, Lt. Ivanoff departed for Milne Bay, New Guinea to help set up the 43rd Field Hospital. It was a rough crossing and upon arrival in the bay, the nurses were transferred to “ducks” for landing on the beach. They were thoroughly soaked along with all their gear.

The new arrivals were trucked into the jungle to their base of operations. Quarters were tents on platforms cocooned in mosquito netting, four to a tent. They slogged through ankle deep mud to their quarters and discovered there was no running water. These newly minted officers, used to typical American homes and all their comforts, were told to use their helmets for “spit showers” and to do their laundry.

The hospital and the mess were on a rise 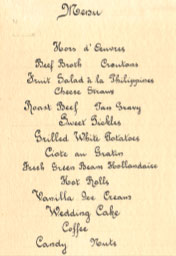 where conditions were a little dryer. The 43rd Field Hospital staff lived on spam, sausages and powdered milk. They were saved by a great baker whose delicious bread became the mainstay of their diet.

The nurses were assigned wards and treated the wounded soldiers brought in from the front lines. The most difficult cases were patients with “jungle rot.” Soldiers who had been on the line for days and weeks with wet boots and socks, subjected to rain, mud and sweltering jungle heat suffered terribly and the damage to their lower legs and feet was nearly impossible to treat.

Georgia praised the corpsmen for their devotion to duty, helping to lift and move wounded soldiers with great care, assisting with treatment and making it possible for the nurses to look after the constant influx of patients under trying, difficult conditions. 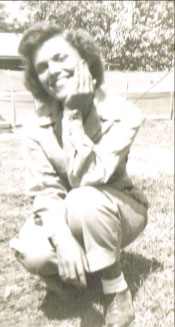 came rushing to Lt. Ivanoff one day to report that two patients were fighting with each other. The petite lieutenant interceded and led one of the soldiers to another part of the hospital to talk with him and help him calm down. He looked down at her and said, “and a little child shall lead them.”

Lieutenant Edward Olsen, now a rifle platoon leader in the 130th Infantry Regiment, landed at Finschaven, New Guinea in May, 1944. Finschaven was a seaport town where allied shipping found safe harbor as more of the Japanese navy was destroyed. In October, 1944, the 43rd Field Hospital left Milne Bay with new orders to set up base in Hollandia. Their hospital ship made a brief stopover at Finschaven and upon hearing the news, Edward rushed to the harbor. Edward and Georgia had their second

meeting, an unpredictable, unexpected, happy encounter in the middle of war.

Lt. Ivanoff remained with the 43rd Field Hospital in Hollandia for several months ministering to sick and wounded soldiers. Lt. Olsen, still with the 33rd division, had moved on to Morotai, Netherlands, East Indies. In the winter of 1945, as the Japanese were pushed back by the U. S. Sixth Army, the 33rd landed at Lingayen Gulf, Luzan, Phillipines. Olsen established a munitions dump for his battalion, stockpiling ammunition, grenades and other explosives. He organized and led parties to transport ammunition to the front lines.

Lt. Ivanoff was on the move again with the 43rd. This time her destination was Urdaneta, a village near Lingayen Gulf.

Does this incredible circumstance really sound like the vagaries of war? The two lieutenants met for the third time and agreed that in the midst

of this terrible war something wonderful was happening. Edward said,” it was meant to be since even the Army is cooperating!!”

Lieutenant Olsen’s division was ordered to capture Baguio, the Phillipine summer capital, which was still under Japanese control. The young couple managed a few visits even as Edward led dangerous missions to the front and Georgia worked long hours tending to stricken soldiers brought to the 43rd. The city was liberated at last in May, 1945 and its citizens finally freed. Georgia and her nurses were climbing up a hilly street one day when there was a commotion about a passing Army officer. They quickly discovered it was General Douglas MacArthur. “How shall we act, what do we do?” came the excited questions. “Just as you would conduct yourself for any other ranking officer,” instructed their Chief Nurse. They 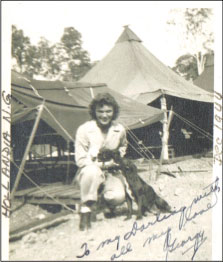 A photo for her soldier.

stood at attention by the side of the road as his jeep passed by, an exciting moment after a long and arduous struggle.

Now a new effort began, how to obtain all the necessary permissions and documents required to get married. First their superior officers had to grant permission. Edward’s colonel not only gave his approval but was best man for the couple and Georgia also received the approval of her Chief Nurse. Documents came from Georgia’s parish priest, her father, even her elementary school!

But how does one plan the special details of a wedding day in the midst of ongoing war with nowhere to shop and nothing to shop for? The answer–the Sisters of St. Paul, a Belgian Order of Sisters associated with St. Louis Cathedral in Baguio. The Sisters made Georgia’s wedding gown from a parachute. The gown 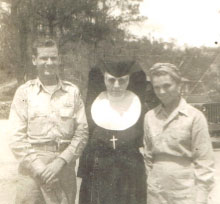 survives today, a truly memorable and beautiful gift from the Sisters to the bride. The dress, done with delicate hand stitches, was designed with long, tapered sleeves, covered buttons at the wrists and a short train. The lace trim around the graceful neckline was taken from a donated negligee. Another parachute was transformed into a flowing, feminine nightgown and a pair of lounging pajamas with hand embroidery on the jacket.

The Sisters of St. Paul planned the details of the wedding ceremony and reception. Georgia and Edward wrote charming commitments to one another. A wedding menu describes a sumptuous dinner all provided by the Army!

The wedding took place at St. Louis Cathedral in Baguio at noon on August 6, 1945. Unknown to the bride and groom and their guests, it was the very hour when the Enola Gay, piloted by 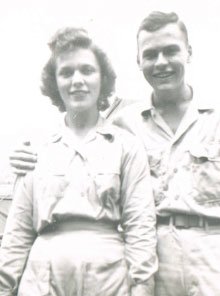 A rare day off.

The war in the Pacific ended during Georgia and Edward’s brief honeymoon. Georgia returned to the United States and Edward proceeded to Japan as regimental liaison officer for the 130th Infantry Division. He was awarded the Bronze Star for meritorious service and separated from the military on May 29, 1946. The civilian Olsens made their principal home in Chicago where Edward conducted his optometry practice until retiring in 1988.

They bought their Marco Island home in the 1970’s and retired permanently here in 1988. Georgia still makes her home here and enjoys visits from her daughter, Lucienne and husband, Keith Klipstein, her three grandsons and now a great granddaughter. Coastal Breeze News salutes Lt. Edward Olsen and Lt Georgia Ivanoff for their dedicated service to our country and for their example of enduring love which flourished through a dreadful war and a 60 year marriage lived well and faithfully.