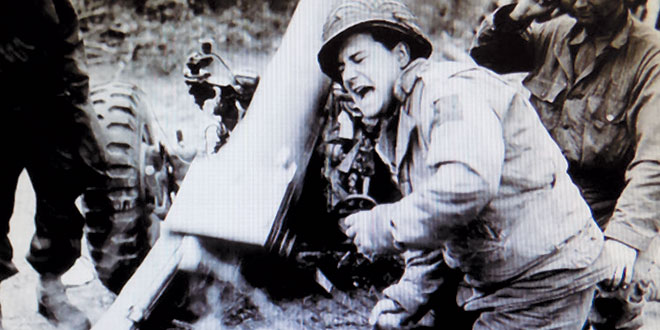 Walker Noe has wintered in Goodland since 1985. He has lived in a cottage at 519 Goodland Dr. W., which he purchased from his father who had the place moved over from Caxambas in the 1960’s. Walker was born at Stanford, Kentucky on May 18, 1923, the first of five siblings. Walker’s father owned a hardware store and sold Nash automobiles as a sideline.

In 1932, due to the Depression, Walker’s dad lost his businesses. The family was forced to move to a farm in nearby Hubbell. “We moved from a house with all the modern conveniences to a place with none at all,” said Walker. Hubbell consisted of a church and a country store. The farmhouse was lit by kerosene lamps, which gave off a yellowish, flickering, smoky light. Later on, Aladdin lamps gave a brighter, whiter light. “I was kind of afraid of the dark,” Walker said, “I often took a candle to the bedroom.” Water came from a well, and heat came from a coal and wood burning stove in the kitchen. The stove had a reservoir attached to one side, which was kept filled with water. This water served as bath and laundry water for the laundry. Saturdays were bath days, when the children were washed one at a time in a galvanized tub in the kitchen. “The kids were washed in the order of being caught by our mother,” Walker said, “She had to run ‘em down. None of us were very dirty anyway. We hated baths more than anything.” The second most unpleasant chore was emptying 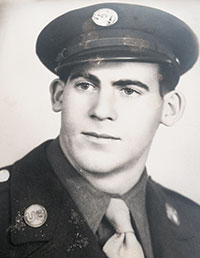 the slop bucket in the morning. “Going to the outhouse was no fun at night.” Walker explained.

In 1941, Walker matriculated at Center College in Danville, Kentucky. In the fall of 1942 he enlisted in the Army and was sent to basic training at Camp Grant, Illinois. While there he took a series of aptitude tests, which qualified him for the newly formed Army Specialized Training Program (ASTP). As described by author Raymond Ross, Ph.D., “A select group of high IQ soldiers were chosen for university training in the ASTP. They would become the engineers, the linguists, and the medics needed for a long war. When infantry casualties mounted and draft boards came up short, the program came to a sudden halt, and these special soldiers were unceremoniously deployed to combat divisions.”

The Army sent Walker to Michigan State College in East Lansing, where he engaged in prescribed courses of study for mechanical engineering. It was at Michigan State that Walker gave a dazzling display of his U.S. Army certified high IQ. As Walker tells it, the ASTP cadets wore uniforms when attending class. They were mixed in with civilian students during class, but when going back to their dorm, had to fall into formation and march. “One day, I took a shine to a cute coed and wanted to make sure she got safely to wherever she was going,” Walker related, “I skipped formation, and as we walked across campus holding hands, I knew I had done the right thing.” The euphoria lasted until an Army Captain came storming up demanding to know why Walker

was not in formation. Things looked bleak for Cadet Walker Noe. “I envisioned a lot of demerits and had to think fast,” Walker said. Standing stiffly at attention, Walker acknowledged that he should have been in formation with a crisp “Yes Sir!” The interrogation continued. “What’s your name soldier?” the officer asked. “Noe sir,” replied Walker. His face reddening, the officer intoned “I asked you soldier. Now what is your name?” “Noe sir,” replied Walker. Exasperated, the captain moved in for the kill. “Damn you soldier. Let me see your dog tags.” Walker fished out the dog tags. As the officer looked them over, his angry countenance lightened up a little and then turned into a laugh. “Well next time, please stay in formation,” finished the captain. Nicely done, Walker!

The ASTP was discontinued in 1944 and Walker was transferred to the 302d Field Artillery Battalion (105mm Howitzers) of the 76th Infantry Division. Crammed into a troop ship with bunks stacked eight deep, the Division arrived in England on December 21, 1944. With little artillery training, Walker was designated as a truck driver. To shore up defenses in the Battle of the Bulge, the 76th was rushed to Le Havre on January 17, 1945. A two-day forced march put them on the front lines. Walker recalls bitter cold, snowy days with troops pushed to the limit of endurance. After arriving in the Ardennes on January 19, the archives of the 76th record 95 straight days of combat lasting until the end of the war on May 7, 1944. The Division suffered almost 40% casualties during

its campaigns in France, Belgium, Luxemburg, and Germany. After the Battle of the Bulge, the Division was attached to General George Patton’s Third Army where it breached the Siegfried Line, crossed the Rhine and plunged into Germany.

In France, Walker was engaged in ferrying wounded troops to the rear and returning with ammunition and spare parts for the 105’s. Later, across the Rhine, “The front line was very fluid,” recalled Walker, “Patton pushed his troops hard and the field artillery had a tough time keeping up. It was difficult constantly setting up and taking down the artillery. We had to drive all day and all night to keep the guns supplied.” One night, while driving through Germany, in a rush to get supplies to the front line, Walker’s supply column overshot the line and went about 10 miles into enemy territory. After they had gotten turned around, another column approached from the opposite direction. Both columns were blacked out and the night was dark. They passed side by side, within feet of each other. “We were half way by each other before we recognized the German’s yellow charcoal burning trucks,” said Walker, “The road was narrow and you could almost reach out and touch their trucks. They had to know who we were, but no one said a word. Both columns just kept going. It was a tense time.” Walker recalled a brighter moment. “We liberated a German warehouse full of sparkling burgundy, commandeered a German truck and loaded it with as much wine as it would hold. Until every drop was gone, this truck 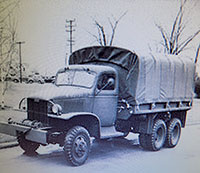 A WWII Deuce and a Half truck

was one of most closely guarded vehicles in the unit.”

After the surrender, most German soldiers in the west were walking away from the Russians, trying to find their way back home. “They were scared of the Russians and did not want to surrender to them. For the next three weeks we were ordered to pick them up and get them to camps where they could surrender to the Americans.” This was followed by orders to transport Polish forced laborers to units of the Red Army for repatriation to Poland. “The Soviet soldiers were a rough looking bunch, but the Poles were overjoyed to be going back to their homeland. They sang and many cried,” recalled Walker, “Their most valued gifts from the Americans were a chocolate bar, book of matches, or a Coke.”

Finally in the summer of 1945, Walker was shipped back to the U.S. aboard the Queen Mary. It was so crowded he had to sleep on the deck. Walker got a 90-day furlough with orders to report to California afterwards. “It was no secret that we were to be part of the invasion of the Japanese mainland,” Walker said. The Japanese surrendered before this could happen however. Walker was told he could return to college to await further orders. The orders never came, but an honorable discharge did.

Next edition – The Noes arrive in Goodland.