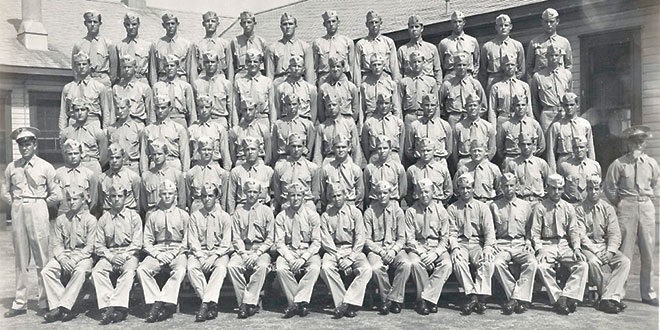 Sal was born in Lawrence, Massachusetts, but his father moved the family back to Brooklyn when Sal was very young. The East New York Section of Brooklyn was where he grew up. At age 13, Sal tried to join the military. School held no interest for him at that time and he felt that he was treading water as far as actual learning was concerned. His brother Anthony, older by five years, was in the service and Sal wanted that for himself. He reported to the Army Building at 39 Whitehall Street, NYC, to register for the draft, claiming he was 18 years old and was actually in the process of his physical exam when FBI agents interrupted and took him home. His parents had reported him.

So Sal went back to his routine of hanging out with his no-school-attending cohorts, taking in movies, catching Sinatra at the Paramount, entertaining themselves as best they could, while not doing anything to embarrass their families. On his next attempt to join the military, he succeeded. In 1944, he was accepted into the 23rd Regiment of the New York State National Guard, Brooklyn N.Y. Then he went to Camp Smith, Peekskill, 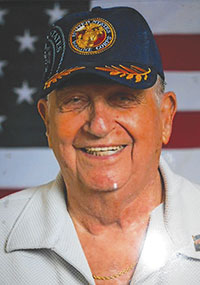 NY. He was discharged in a year due to the war winding down and the military needing to thin its ranks.

After several months back home, Sal still desired a life in the military. He saw his options as either joining “the Goodfellas” or the service. This time, in April 1946, he went to enlist in the Marine Air Corps with a birth certificate showing his age as two years older than the actual 15. At the time, Sal was his full adult height of 5 feet 10 inches, slightly taller than the average male, so he breezed through this physical and was assigned to Platoon 114, Parris Island, South Carolina.

Most of his time in the Marines was spent at Cherry Point, North Carolina. He was in U.S. Marine Air Corps Group 11, and later Mag 15 for training purposes. They were assigned to aircraft carriers. He served on the Franklin Delano Roosevelt for quite some time. Captain McManus chose Sal to assist him, to take notes, “You’ll write down what I say.” So he became assistant to the landing signal officer strictly by chance.

The ship’s main task was to qualify pilots for takeoff and landing on aircraft carriers. The signal officer used hand flags to communicate with the pilots in those days. Today that is all done electronically, of course. Sal’s job was to write down “too fast, too low,” etc., for

feedback to the pilots. He performed this task while sitting on the edge of the ship, legs dangling over the side, ready to dive into the retention net below when the planes swerved off the landing pattern. This happened quite frequently.

Sal also served on the USS Boxer and the USS Saratoga, doing the same job of qualifying pilots. One assignment he remembers well from the Boxer was closing down the Marine Corps Air Station Ewa in Hawaii. They evacuated the base, packed up supplies, and put everything on the Boxer – men, women and children – and transported all back to Cherry Point, North Carolina. On the other hand, the crew worked in opening up a base in Edenton, North Carolina. All part of the reorganization of the military after the war ended.

He recalls another assignment when they were at Guantanamo Bay during a hurricane. The planes had landed there on the ground, not on the aircraft. They asked for volunteers to go across the bay, tie down the planes, and sleep in the hangars. He volunteered. It was a very rocky trip, with the ship being tossed about by 30-foot waves, and everyone was sure it would be their last voyage. But eventually the ship ended up in a cove, out of the rough water and they were able to complete their mission to secure the aircraft and eventually did embark

Sal, like 14 million veterans, served in a non-combat capacity, and because World War II was not officially ended until President Truman signed a declaration of such in December 1946, he earned eight months’ credit for service in that war. He also has campaign certificates for the Cold War and the Korean War, both of which began during his stint in the Marine Air Corps.

It was the onset of the Korean War that extended Sal’s enlistment in the Corps, keeping him in an extra year. He did make one trip involving that war when his crew was assigned to fly to China help evacuate refugees and retrieve supplies. It was January, frigid, and they were only there long enough to load up, and then flew right back to stateside. His most vivid memory is the frigid temperature.

Sal credits the Marine Corps with giving him direction and a purpose in life. He feels they taught him everything, even basic life skills. He began to read while in the service and gained tremendous self-confidence from the respect he was shown by others for doing his job well. He also enjoyed his life in his Marines. Being so young, he basically was a sponge, soaking up every experience that came his way.

When Sal separated from the service, he went home and eventually secured a job at the post office. Life was good. One

day a workmate announced it was his last day, and that he was leaving to go to the police academy. Sal was intrigued. He learned that the major requirement for the academy was to pass a qualifying test. He did so and began a 21-year career with the Nassau County Police Department in Long Island, N.Y.

During this time, he also married his wife of 51 years, Ruth. She was a very young widow at the time with two children. (They now have 10 great-grandchildren.) Sal also regained an appetite for school. When the federal government funded a grant program for education and retraining of law enforcement personnel, Sal enrolled in college and earned an AA in criminal justice while working his full-time job. He even took many credit hours beyond that required. Eventually he earned a promotion to detective and spent the last several years of his career as assistant to the NCPD police commissioner.

The year 1964 was pivotal in his life. He not only earned his pilot license, but also discovered Marco Island. He was smitten and knew Marco had to be his future home. When he did settle into Marco full time, Sal got his license and made real estate a part-time occupation. He has been very active in the community, through his church, the Knights of Columbus, the Moose and joined Marco’s American Legion Post 404 when it was 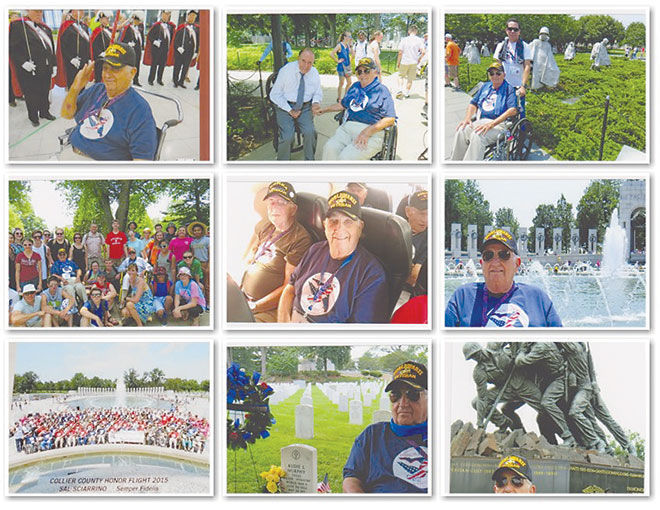 Sal is one of the island veterans who has made the Honor Flight to Washington, D.C., to visit the veterans’ sites. His guardian on that June 2015 trip, Marco Scola, gifted Sal with a gorgeous photo book documenting the event. In one photo Bob Dole is seen shaking his hand. Apparently former senator Dole spends many of his weekends in D.C. greeting visiting veterans, particularly as many World War II veterans as possible. The entire trip was a very special experience. The Knights of Columbus were at the airport to greet Sal on his return flight, a sweet ending to a memorable day.

Although Sal was very young when he served in the National Guard, and then enlisted in the Marine Air Corps, there are actually thousands of others like him. So many in fact, that they have an organization, VUMS (Veterans of Underaged Military Service). They also have a website.

Sal Sciarrino, we salute you for your service to our country. We congratulate you for finding your way back to the classroom and pursuing your education. You have built an amazing life of service and good citizenship. We are proud that you made your home here.

Note: Clarification for those of us who are not familiar with military terms, of “VMF-461,” the unit Sal served in. VMF = Marine Fighter Squadron. The V comes from early U.S. Navy designations, distinguishing lighter-than-air vessels (dirigibles, etc. which were “Z”) from heavier-than-air vessels (fixed-wing airplanes).