SALUTE TO VETERANS Ray Ladurini: Serving Marco Island and beyond 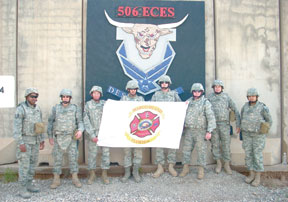 In 2010, Marco Island firefighter Ray Ladurini returned home from Operation Iraqi Freedom. A Senior Master Sergeant in the US Air Force, Ladurini recognized the support of Fire Rescue Chief Murphy and Division Chief Byrne, by presenting to them the Tradition of the Coin, an Air Force practice carried down since World War I. “We give coins to the people that have taken care of us,” he explained. With more than 25 years of service, two wars, and travels to countless countries under his belt, it seems that Ladurini should be the one accepting coins of gratitude.

It also seems that Ladurini was always meant for a military career. He was, after all, named after his uncle, Raymond Riscoll Ladurini, a “Hell’s Angels” B-17 Bomber radioman/door gunner during World War II whose plane went down after ten missions. “My father named me after his brother, but my father was also a pilot who 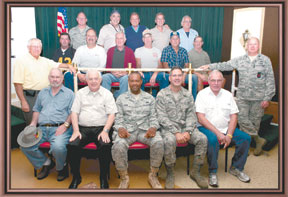 Ray’s troop from Desert Storm reunited in Homestead in 2010.

After his father passed away, Ray stayed at home, helping his mother take care of his two younger brothers. Once they were old enough to take care of themselves, Ray enrolled in the US Air Force in September of 1986. He was 25 at the time. “I felt like I was behind the eight ball, I had seen all my friends come out of college with degrees. I thought the best way to make up lost time would be to join the Air Force where I could work and attend school.”

Ray was sent to Lackland Air Force Base in San Antonio, Texas for basic training. As a Civil Engineer in the Air Force, his next stop was Sheppard Air Force Base, also in Texas, for technical school. 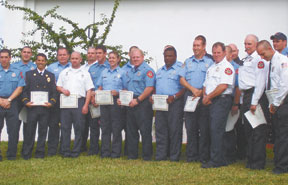 Receiving the Phoenix Award in 2009 for resuscitating a man who had a heart attack.

“After that I was shipped to my first base which was Nellis Air Force Base in Las Vegas. I was with a unit called RED HORSE which is an acronym for Rapid Engineer Deployment Heavy Operational Repair Squadron of Engineers. It was a combat/engineering unit that shipped us all over the world. Our duty was to train and build large projects. Everything from runways to building whole bases as needed. You learn your trade and combat. If the United States were to take over a base in a combat zone, we would be the first ones called in to get the base up and running, so our plane could fly off of it. If the base were to be taken over, we were the last ones left that would blow up the base, blow up the runway and all the utilities so that they couldn’t be used against us.”

Ray’s specific trade was welding and

With the Marco Fire Department controlling brush fires in January 2012.

metal fabrication. “As time progressed, they started combining different jobs. They combined carpenters and welders together to form structures, and later they added the masons and locksmiths. We had to learn all of these trades.”

Leaving active duty in 1989, Ray joined the 482nd Civil Engineer Squadron Reserves in Homestead, Florida. Not long after, Operation Desert Shield/Desert Storm began. It was August of 1990. Reserves were being called for active duty and Ray’s Squadron was no exception. Called into Saudi Arabia in March of 1991, Ray spent nearly six months overseas. “All the heavy fighting was done, but there was still protection going on, taking care of what had already been done and making sure everything was safe and secure.”

Ray lived in a tent for six months with temperatures in the 60’s at night and up to the 150’s during the day. “Some days there would be sand storms that would just roll in and

cover everything in sand, making it hard to do our job.”

Returning home from the conflict, Ray worked as a welder on Marco. “One day one of the guys from the Fire Department came down to the welding shop and said, ‘how would you like to become a volunteer firefighter?’ So I did. After a while I went through Fire School and EMT School and I was hired on as a firefighter at the Marco Fire Department in 1998.”

Throughout this time, Ray was still in the Reserves, committing one weekend a month and two weeks a year to the Air Force. “Throughout my time in the Reserves, we went to Panama, El Salvador, Honduras and other countries.” During these two-week deployments, they would build necessary facilities for some of the poorest of countries. “Our government sees that if we give some of these countries money it would just disappear at the top and never be 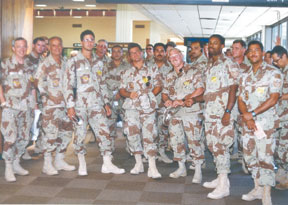 Ray and his Squadron return home after serving in Desert Storm.

spent on the people. So they would send us down there and we would get our training and the people would get their schools and medical centers built. Later teachers and doctors would be sent there. Before we would leave, these small communities would make us a big meal for helping them. It was really memorable. There’s more to the military than just war. It’s about building things and keeping good relations with other countries.”

Over a decade went by and Ray continued to work for the Marco Fire Department along with keeping his commitment to the US Air Force Reserves. As things heated up again in the Middle East, his Squadron was once again called to duty in 2010. “I was still in the Reserves and this kicks off, and they said, ‘that’s it, you guys are going over there for six months.’ But it’s like they say, you keep practicing for the big 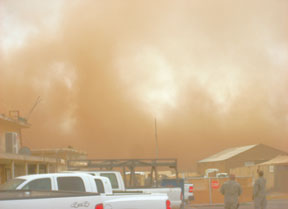 A sand storm tears through Ray’s base.

game, so when it finally comes, you’re ready to go.”

Ray was stationed at Kirkuk Air Base in Iraq from February 7, 2010, to October 6, 2010. “When we got there it was very hot. No matter how much water you drank, it was never enough. Even ice water would be hot in a manner of minutes. We could cook a pizza by putting pizza quick on pita bread with pepperoni and cheese, and by putting it outside in a brown paper bag rolled up. Within five minutes it was done!”

While in Iraq, Ray’s Squadron was responsible for taking care of the entire base. “Our responsibilities were making sure the base was up and running, and helping with security. Our job was also to help security forces build security towers. This was done by building the towers, and installing bullet proof glass and panels on them. This was to keep our security forces safe from 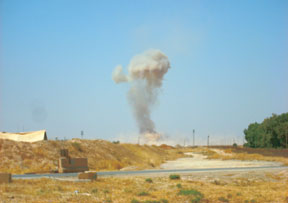 shooters. We were also a backup for the security forces in time of need. If they were low on manpower we’d be the first ones in with them to help man the towers.”

Stateside for nearly two years now, Ray continues to serve in the Reserves and works full-time for the Marco Fire Department. “I’m very fortunate to have a Fire Department that is pro-military, that believes in us. They are very supportive.” His military training has also helped him as a firefighter. “Training for structural engineering has helped because when we go through houses, I can look at walls and know right away where studs and electrical lines are located. If a house has been on fire I can detect exactly what the cause is from knowing how it’s built.”

While Ray’s military service has been a benefit in his career, it has also changed him as a man. “It’s an experience I would never 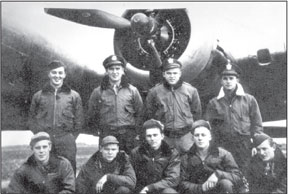 Raymond Riscoll Ladurini and his Hells Angels crew went down during WWII.

give up. I tell people about it and I don’t think they really get the real feelings and meanings behind it; how it changes you, and how you look at your freedom. People take it for granted. Coming back you realize the price that others have paid for our freedom. But you also realize how little others have in these third world countries. We were in the hills of El Salvador and I took a picture of a little girl carrying a pot of water on her head. Most of these people will never know what its like to live in America; they lived in a shack with boards for walls and a mud floor. That’s the only thing she may ever know. Sometimes we would get together and buy shoes or other thing for the children, so they could have something. You just try to bring some joy into someone’s life. For me, It’s the right thing to do, it’s all just part of being an American.”