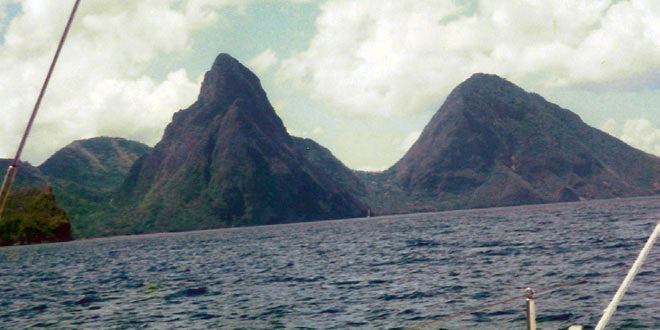 Life aboard GRENDEL continued to keep us diligent and aware of our surroundings at sea. We had weather gathering capability, but not like you would have today. At that time, all we had was a SSB single sideband/ham radio. Each morning we would tune in and listen to David Jones in AM and Herb Hilgenberg in the evenings. We would get weather faxes from NOAAH on our SSB. Now with internet, it is possible to get weather as a result of Wi-Fi at a good number of the Caribbean anchorages. Boating has come a long way in such a short period of time.

We arrived in St Lucia on Good Friday and anchored off the marina in Rodney Bay. It seemed like we arrived at a homecoming celebration. When people cruise from port to port, seldom do they all come and go on the same day or at the same time. That type of “buddy” cruising doesn’t take place when you are sailing offshore. Many factors come into play such as: the type of boat, depth of keel, shape of hull, type of and size of sails, power of motor, wind speed, direction and many more.

I do not know what life in St. Lucia is like today. When we were there, we had mixed feelings about the island. There are a variety of things to do there, but some of the locals made our stay a bit unpleasant. We were constantly approached and hassled for money or to buy goods. For example, we were leaving the marina grounds on our way to Easter Service when a guy jumped out of his car to “welcome” us and gave me a cricket made from palm leaves for good luck. Of course, we knew he wanted a donation for his “gift.” Not wanting to insult him – this was the first of many crickets to come – I gave him $5 which was, in Eastern Caribbean (E.C.) currency, $2.67.

Another time, we rented a car to drive around the island rather than a tour. As we approached the entrance to Marigot Bay, which we wanted to see before moving the boat there, we were stopped by a boy who asked to be our guide. 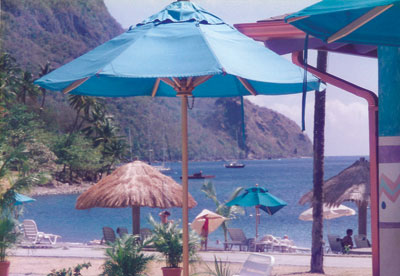 Resort at the Pitons.

He would not take “No thank you” for an answer. He started to jump into the back of our jeep and my husband just pulled away. The fellow was not harmful, just persistent. There really were no jobs for these folks to earn a living so he tried to be our guide for the day. We often make it a point to hire these young boys, but it was very difficult to deal with this every time we walked through town. We experienced several of these encounters.

Not all experiences in St. Lucia were negative. Most of the locals really wanted to be helpful. A week or so before we arrived, I scraped my shin and developed a doozy of an infection from wading in the water. We asked about medical care at the marina office and the manager spent most of the morning trying to find a doctor who was available. Oddly enough, it was Wednesday, and just like home, all doctors were off on Wednesday. Anyway, this fellow stopped what he was doing and took us to his doctor’s office. The young man spent over an hour helping us. Too many of us refuse to travel to countries that are different from what we are accustom or simply avoid these places and only visit places with which we are familiar. How sad. This is called “xenophobia.” This doctor gave up most of his day to be sure we would get the proper care.

Let me digress for a moment. Many of you reading this have had your own experiences outside the USA. So have we. However, when you travel just, “Mom and Pop” – on your own little boat to a foreign country or even states far from your home port, you are welcomed and treated differently. Anyone can buy a ticket and fly, for example, to the Bahamas, Bermuda, South America and so on. The locals see this every day. However, when you sail in with your own sailboat of any size and your crew of two, you are looked upon differently and cordially welcomed into their country and homes.

After one night visit to the lovely harbor at Marigot, we sailed to the Pitons, which are the two 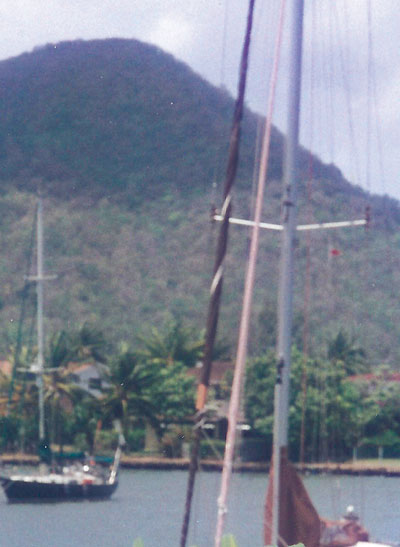 magnificent volcanic peaks, often used in ads promoting the Caribbean. They just soar skyward out of sea. The anchorage here is very, very, deep – 70 feet. There are moorings there which makes life simpler. The view was spectacular.

While we were there years ago, a friend aboard s/v SUNDOWN woke up to find his dinghy missing. When he inquired, he learned that his dinghy had “drifted away” all by itself during the night. A fisherman “found” it and returned it to the police. Our friend, Simon, had to buy his dinghy back for $200 US dollars. This, and other stories of theft, really gives the islands a bad name. It is a shame. At the time we were there, the St Lucian tourist board was really trying to encourage tourism and these few incidents were ruining it.

St Lucia is more mountainous than many other Caribbean islands. Its highest peak is 3,120 feet above sea level. The Pitons are two other peaks that form the island’s landmark

After a visit to the Pitons, we set sail for Bequia which is part of St. Vincent and the Grenadines. Wow, what a sail we had that day! As long as we were in the lee of the island either, St. Lucia and St.Vincent, we had little or no wind and a calm sea. Once we poked our nose out into first St. Vincent Channel and later Bequia Channel, we were met by the “Bequia Blast!” We were sailing with a reefed mainsail, reefed Genoa and staysail. Eventually, we rolled in the Genoa. Wow, what a sail! Don’t you wish you were there?

We had been reading about “these faraway places with strange sounding names” as the song goes and talking to people who have been there. We dreamed about the islands and romanticized them in our minds; Prince Rupert Bay, Dominica, Rodney Bay, St Lucia; now we were approaching Admiralty Bay, Bequia. We would hear folks talking on the SSB radio and making calls from their VHF radios. I could only imagine. Sometimes, a person imagines a place grander in his mind than what it really is and is thus disappointed when making their arrival.

Well, not Bequia! It is a jewel in the sea. (to be continued)