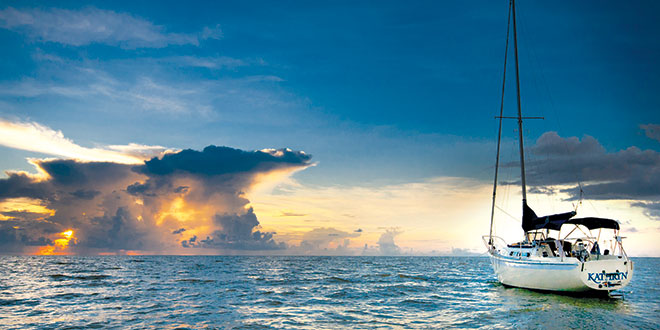 The Kathryn. PHOTOS BY JIM FREEMAN

Goodland has long been known as a fishing community, both commercial and private. Being located in the Ten Thousand Islands, with quick and direct access to the gulf, makes it a natural for fishermen. With our many canals, almost every waterfront residence here has a fishing boat sitting on a lift out back. We didn’t all come here to fish, however. Goodland is also ideally situated for sailors, especially for trips to the Keys, Dry Tortugas, the Caribbean, or even the Bahamas. There are a few sailboats on lifts here. Larger sailboats can be accommodated in Goodland’s Calusa Island Marina, next door.

Richard and Carolyn Roth were living in Michigan, when in the late 1970’s, a series of family tragedies took their two daughters and both sets of parents from them. In desperation, Carolyn began to consider a change in location and lifestyle. She and Richard had always been intrigued by the romance associated with sailboats. “It was something I had always wanted to do. I needed to do something to get me through that depressing period,” said Carolyn. Looking through sailing magazines, she noticed a Marco Island charter sailboat company which was offering sailing/cruising classes. Moving quickly, the Roths lined up a broker and located an Island Freeport, 43 foot ketch which was located in Ft. Lauderdale. A ketch has two masts, with the smaller one toward the stern. The plan was to live aboard the boat and do a lot of sailing. It was too good to pass up.

Not having sailed or taken lessons, the Roths bought the boat and hired a captain to sail the boat over to Goodland in 1981. Next step was to sign up for sailing and cruise lessons. For the next four years, the Roths lived aboard their ketch, which was docked at a house beside the Olde Marco Lodge. During this period they did a lot of sailing, including numerous trips to the Dry Tortugas, the Bahamas, and snorkeling trips to the Keys. They also worked in a lot of day sailing and overnight trips down in the Ten Thousand Islands. The Roths planned to sail and live aboard this boat for the rest of their lives. However, in 1981 they were forced to sell the boat and move back to Michigan to care for some property. In about 1990, they bought a place in Goodland and now live here seasonally. Well aware of the work required to maintain a 30-foot sailboat, the Roths no longer sail. The feel of a boat heeled over and slicing through the waves is something they will always remember and cherish.

Joe Douglas immigrated to Detroit from the UK in 1956. He worked for Chrysler as an engineer until 1980, when he retired. While in Michigan, he went to Canada and bought a 16-foot kit boat. He then did a lot of sailing on the lakes and rivers around Detroit. Having wintered along Florida’s west 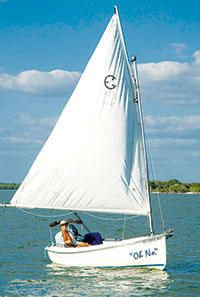 Aptly named, the Oh No.

coast, Joe and his wife Ivy moved to Goodland upon his retirement in 1980. He bought a 22-foot sloop upon arrival. Joe’s express purpose in coming here was to sail, then sail some more. “I sailed 5 days every week, from 8 AM to 5 PM” Joe says. He made solo trips to the Keys and Dry Tortugas, once having to tack against 9-foot seas for 40 straight hours without sleep. Joe started to get lonely and tried to talk Ivy into sailing with him. She finally agreed if he would buy a bigger boat. In about 1990 Joe relented and bought his present boat, a 26-foot Westerly. It is an English boat built in 1975. It is painted a bright yellow and named “Jiver” – a combination of Joe and Ivy. It sits on a lift behind his home. He and Ivy sailed to the Bahamas a couple of times, and to the Keys and Dry Tortugas numerous times. Ivy hasn’t been able to sail with him for years now. I arrived here in 2006 and until recently, saw him sailing out on Gullivan Bay quite often. Joe is in his early 90s now and, although quite spry for his age, finds it more difficult to manhandle the sails in less than ideal conditions. Because of Ivy’s failing health, he cannot leave her alone for long. Today, he confines his sailings to an occasional trip down to Panther Key and back.

Jim Freeman grew up in Amarillo in the Texas panhandle, about as far away from water as you can get. There was nearby Lake Meredith however, seven miles long. Jim bought a 14-foot Blue Water sailboat. It was sloop rigged (jib and mainsail) and a perfect starter boat. Jim sailed as often as he could, and before long was planning his vacations around the boat. He would trailer it to other lakes in New Mexico and Texas. He had that boat for 10 or 15 years. When his daughter was growing up, he lost interest in sailing, until she was in high school. He then bought a 26-foot wooden boat which needed a lot of work. He stored it in his backyard. He found a better 23-foot in Dallas, and towed this back to Amarillo also. He cannibalized the 26-footer to rebuild the 23-footer. He and Sherri Morrison did a lot of sailing on this boat, and towed it to the Calusa Island Marina in 1999. Freeman built the trailer. He and Sherri lived aboard for awhile, and grew to love Goodland. They both were building successful careers, in graphic arts and photography, but sailed out on the gulf whenever they could. In 2004, Jim found a boat in Sarasota that he couldn’t resist. It was the Katherine, a 27-foot sloop rigged Ericson. He and Sherri moved over to Goodland at about the same time. They moored the Katherine in the Marco River at the foot of Pear Tree 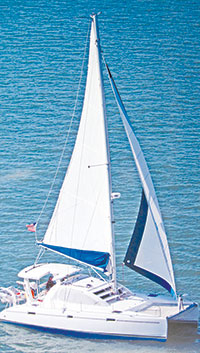 The Lose the Shoes.

Avenue. He and Sherri sail about every month and a half – mostly 3 or 4 day trips, just to get away from it all. They have sailed to the Dry Tortugas and to the south end of Florida. Jim also goes off alone in the Katherine to photograph his famous seascapes, which brighten up a lot of homes in the area.

Like Jim Freeman, I began sailing in the desert, but in the Arizona desert. The Agua Fria River, a dry bed most of the year, is damned up just north of Phoenix. It forms Lake Pleasant, a 3,700 acre lake. Having mated on fishing boats in high school and college, I loved being out on the water. Lake Pleasant is all I had. In 1970, I started out with a used 12-foot homemade boat and trailer. I managed to cram my family of four into the boat for an initial sail. We got becalmed and didn’t get home until after dark. My family wouldn’t get near the boat after that. I graduated to an orange Hobie 16 in 1974. It had orange and white striped sails. My sons agreed to give that one a try and, in addition to Lake Pleasant, we sailed on the Gulf of California and in the White Mountains of Arizona. In 1984, I wound up in the Philadelphia office, and retired in 1995. After retirement, I bought a condo in Brigantine, NJ and started sailing a Hobie 17 off the beach there. I reached a white knuckled top speed of 21 mph once. It would cruise at 7 mph and would move in everything but a dead flat calm. I found on a couple occasions that the North Atlantic is not to be trifled with. Nancy gave me up for drowned once when my Hobie blew into the air, came down mast first, and disappeared into a maelstrom of a violent storm. After the storm passed, I was nowhere in sight. I had been blown 10 miles out to sea, clinging to the rudder post of the capsized boat.

After retirement in 1995, we bought a place in Goodland, installed a boat lift and bought a used 14 foot Com-Pac catboat up in Dunedin. Its owner had been forced to sell it after it had capsized with his wife and couple of friends on board. Reportedly, they all cried “Oh no!” as it went over- Hence, the boat’s name. I have since exclaimed that short phrase under similar circumstances. A catboat has only one sail. Although its top speed is 7 mph and cruises at 3 or 4 mph, it suits my purposes and has held up well. Jay McMillen has kept the 6 horse Yamaha outboard motor humming. I used to sail it two or three times a week, sometimes as far as 10 miles out in the gulf. Today, I have other interests and take it out on Saturdays when the wind, tide

Joe Douglas on the Jiver. PHOTOS BY BARRY GWINN

and weather are right. It is still a great comfort seeing it out back, waiting for me.

Max and Cyndi Bell live a few doors from me. They began to sail together about 30 years ago. Max was in the construction business and traveled around to the various construction sites. While in Rhode Island, he and Cyndi attended a boat show in Newport. They learned that the U.S. Virgin Islands offered sailing classes in preparation for chartering one of their sloops. They went down, took the course, and started chartering bareboats there whenever they could get away. A bareboat is one that comes with no crew to help. Taking a liking to sailing in the tropics, the Bells moved to Naples in 1993, and continued sailing in the Caribbean until, in 2000, they bought a 34 foot Pacific Seacraft, cutter rigged. A cutter’s one and only mast is set further back, allowing for more headsails. By this time they had moved to Marco Island and docked the boat behind their house. When our condos were built in 2006, the Bells were looking to downsize, and moved to Goodland. What particularly intrigued them was the beautiful and capacious Calusa Island Marina next door. It was ideally set up to accommodate larger sailboats. About the same time, Max wanted to try a catamaran. He had chartered catamarans in the Caribbean and liked their speed, ease of handling and stability. He ended up going down to the Virgin Islands and buying one similar to one he had preciously chartered there. In 2010, he and Cyndi sailed it back to Goodland. It was the “Lose the Shoes,” a 40-foot, sloop rigged Robinson and Kane Leopard. It was originally built in South Africa. The Bells are happy with their cat. It has a lot of room and is easier to handle than a monohull. With the hulls set so far apart, it hardly rocks at all, and keeps a fairly even keel. A boat this size does need a lot of maintenance, however. Max and Cyndi can often be found at the marina tightening, replacing, sealing, wiring and fixing. They have sailed down to the Keys, Dry Tortugas and up to Tampa. Today they delight in taking friends out for day cruises.

We sailors are grateful that we can live so close to such beautiful waters that allow us to indulge our passion and need to “go out for a sail.”

On July 24, 2015, Coastal Breeze News reported that on July 1, 2015, Jonathan Criqui had been arrested on charges connected to a June 22nd burglary in Goodland. On July 29, 2015, all charges against Criqui were dismissed at the request of the Florida State Attorney’s office.